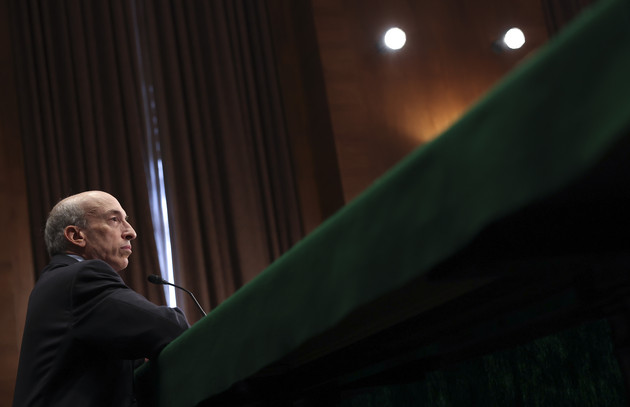 Crypto companies are poised to resist SEC supervision, setting up one of the most consequential battles of the Gary Gensler era. | Kevin Dietsch/Getty Images

Gary Gensler, Washington’s chief cryptocurrency critic, has long been fed up with what he views as the market’s rule-breaking middlemen.

Now, his agency is cracking down on the industry.

The Securities and Exchange Commission’s move last week to charge two digital asset giants — Gemini Trust and Genesis Global Capital — with selling unregistered products to individual investors was a stark warning to crypto exchanges, lenders and other platforms that they need to follow U.S. securities laws.

“It’s about compliance,” Gensler, who chairs the SEC, said in an interview days earlier, while discussing the agency’s broad crypto enforcement strategy. “There’s so much non-compliance in this field. It’s part of the business model.”

Following the collapse of FTX, the one-time darling of the since-battered $1 trillion market, the SEC has found new footing to rein in crypto. Calls for stricter enforcement are growing louder across Washington and Wall Street. Congress just gave the agency a bigger budget. And a late 2022 court victory has reaffirmed the SEC’s view that crypto tokens can be securities — and subject to strict regulation — even without being sold to the public through initial coin offerings.

The SEC’s campaign for compliance could cement the regulator’s authority over crypto — ushering in a new age of policing in a market that Gensler has called the “Wild West.” It would also assuage concerns from progressive advocates and lawmakers who want the agency to move faster and more aggressively to protect consumers and investors.

But crypto companies are poised to resist SEC supervision, setting up one of the most consequential battles of the Gensler era.

Coinbase CEO Brian Armstrong accused the regulator of “some really sketchy behavior” after it effectively blocked the launch of a lending product. Terraform Labs founder — and now crypto fugitive — Do Kwon fought off SEC subpoenas for months through court challenges, including an unsuccessful appeal to the U.S. Supreme Court.

And in the latest instance, Gemini cofounder Tyler Winklevoss called the SEC’s charges against Gemini and Genesis “totally counterproductive.” Gemini and other creditors, he said, “are working hard together” to recover nearly $1 billion in frozen customer assets on the crypto lending platform that the SEC alleges should have been registered with the agency. In a tweet, Winklevoss wrote that Gemini looks forward to defending itself “against this manufactured parking ticket.”

The industry also has allies in Congress.

House Republicans have made Gensler one of their top oversight targets and have been asking questions about his work in the crypto space. And Congress this year is likely to debate legislation dealing with the SEC’s role in the emerging industry.

Underpinning the industry’s frustrations with the SEC — often relayed through a mix of conspiracy theories, contempt and trolling on Twitter — is a fundamental disagreement over the agency’s authority in the market.

Since the days of the Trump administration, the SEC has argued that much of the crypto market already falls under its jurisdiction as securities, and typically unregistered ones at that. Using the “Howey Test” — an assessment of whether something qualifies as an investment contract derived from a 1946 Supreme Court decision — SEC officials including Gensler and former Chair Jay Clayton have said that most tokens are securities and that the scores of platforms dealing in them should treat them as such.

But crypto executives say the reality is not so black and white. A token’s use and characteristics can change over time, for instance. And the SEC has never identified broad swaths of tokens that it views as securities — outside of a few instances — nor has it laid an express path for how companies should register with the agency, they say.

“Right now, we have a decades-old precedent, we have speeches from certain commissioners of the SEC and we have little more than that,” Coinbase Chief Legal Officer Paul Grewal said. “For this market to truly flourish — and, most importantly, for investors to be protected — there needs to be proper guidance.”

Yet under Gensler, the SEC has already pursued dozens of different crypto cases. The agency’s existing authority was recently affirmed in a case against blockchain-based publishing platform LBRY, which the agency alleged in 2021 failed to register its LBC tokens as securities. A U.S. judge sided with the SEC in a November ruling, which LBRY CEO Jeremy Kauffman warns “threatens the entire industry in the U.S.”

“They’re boiling the frog,” Kauffman said. “Every win they get emboldens them to get more.”

Gensler has pushed back on calls for new rules and regulations around crypto, telling POLITICO that concerns about a lack of regulatory clarity are a “false narrative.” SEC Commissioner Caroline Crenshaw, a fellow Democrat, separately said in an interview that if the SEC were to provide guidance that “a security is an 8.5-by-11 sheet of paper, all of a sudden everyone’s paper is 9-by-12.”

The SEC, instead, wants crypto middlemen to come into the existing securities regulatory regime. Gensler said the agency has been talking with companies about how to register, a process that he added would include “disentangling” their businesses. Crypto companies are often structured as exchanges, broker-dealers and custodians all rolled into one entity, despite each being regulated differently.

The agency has been encouraging crypto exchanges to register on a voluntary basis because it wants to avoid litigation with a large segment of the industry that it believes is breaking the rules, a person familiar with the matter said late last year.

Gensler said he’s “unable to predict” whether companies will wind up coming into compliance through proper registration first or enforcement actions later.

“For regulated entities that are fully compliant with our framework, we have a broad range of tools at our disposal to help detect and deter fraud and misconduct, including disclosure review, inspections, examinations and more,” Crenshaw said. “When entities choose to remain non-compliant, the only real tool available to us is enforcement.”

Pressure has been mounting on the SEC to take a more aggressive approach to crypto for some time — especially against the market’s biggest players.

The Gemini and Genesis case, which is still the subject of further investigations at the SEC, will likely assuage some of those concerns. But the case is not entirely novel, as the SEC has gone after similar lending products before, including one planned by Coinbase and another offering from the now bankrupt lending platform BlockFi, which settled the SEC charges.

In the meantime, the SEC has made clear that it believes there are exchanges offering trading in unregistered securities, said Tyler Gellasch, a former agency attorney who pointed to Coinbase as an example.

The SEC filed insider trading charges in 2022 against a former Coinbase employee, alleging at the time that seven unregistered securities were trading on the exchange. Coinbase has denied the claims.

But the agency has yet to bring a banner case against Coinbase or any other crypto exchange. And until the SEC is regularly doing as much, it risks losing “public credibility as well as political credibility,” said Gellasch, who now leads the institutional investor advocacy group Healthy Markets Association.

“If they’re here to protect investors,” Gellasch said, “they have to bring the cases.”

Solana Blockchain SOL Token Doubles From FTX-Crash-Induced Lows, but Will It Continue to Rebound?

What happened with the FAA’s computer outage?