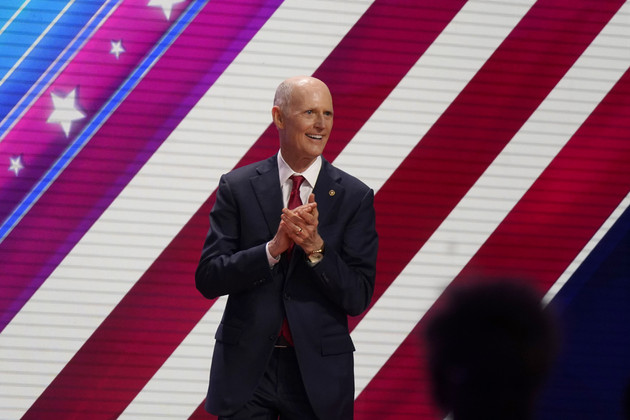 Florida Sen. Rick Scott has recently faced criticism and questions about why the NRSC has a fraction of the amount of money available for the fall campaign that its Democratic counterpart has. | LM Otero/AP Photo

More than a half-dozen Republican Senate candidates are set to embark on a multi-stop fundraising swing through Florida, as they confront a massive cash disadvantage heading into the final stretch of the midterm elections.

The National Republican Senatorial Committee and its chair, Florida Sen. Rick Scott, are set to host three events on Thursday and Friday, which will be attended by eight Senate candidates. The fundraisers — which are to take place in Naples, Palm Beach and Miami — are expected to raise $3.5 million total, with $2 million going to the committee and $1.5 million spread out among the candidates.

The fundraising tour comes ahead of an NRSC-hosted donor retreat this weekend taking place in Sea Island, Ga. The two-day conference, which according to an invitation is to include a golf tournament and clay shooting, is expected to draw a host of incumbent senators and candidates.

It comes amid broader worries among Republicans over the party’s weak fundraising. The roster of candidates taking part in the Florida swing includes Nevada’s Adam Laxalt, Ohio’s J.D. Vance and Pennsylvania’s Mehmet Oz, each of whom have been far outraised by their Democratic rivals. Also attending will be Sen. Marco Rubio , Florida’s home-state senator who has been outraised by his Democratic opponent, Rep. Val Demings.

The Florida fly-around has been in the works for several months, according to a person familiar with the matter. The other candidates expected to attend are Iowa Sen. Chuck Grassley, North Carolina’s Ted Budd, Colorado’s Joe O’Dea, and Washington state’s Tiffany Smiley.

Altogether, the candidate roster represents a handful of “reach” states as well as the core of the battleground states up for grabs in the midterm election, as Republicans run to flip the 50-50 Senate back to their control.

Scott has recently faced criticism and questions about why the NRSC has a fraction of the amount of money available for the fall campaign that its Democratic counterpart has. Scott, who organized the trio of Florida events, has pushed back against the criticism, arguing that the committee made early investments that will help the party financially in the long run.