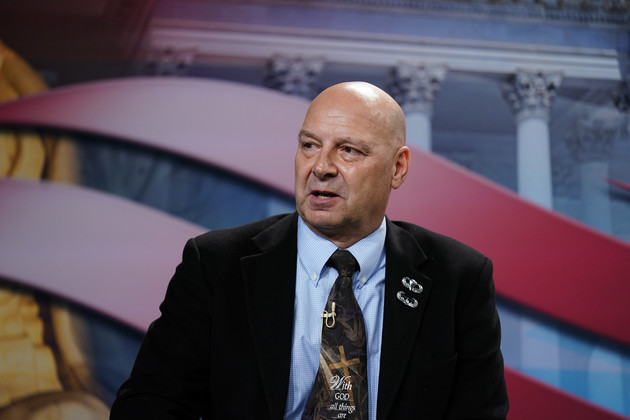 In the suit, Doug Mastriano argues that the committee’s rules and composition mean it cannot compel witnesses to sit for depositions. | Matt Rourke/AP Photo

State Sen. Doug Mastriano, the Republican nominee for governor in Pennsylvania, is suing the Jan. 6 select committee, setting up a legal fight between one of the most prominent congressional investigations in recent memory and a Trump-backed candidate in a hotly contested midterm race.

Mastriano filed his suit on Thursday afternoon in federal court in Washington. It names the committee itself as a defendant, as well as each member of the panel and House Speaker Nancy Pelosi.

In February, the committee subpoenaed Mastriano for documents and testimony. Shortly after winning the Pennsylvania GOP gubernatorial primary in May, Mastriano produced a tranche of documents for the committee. He also signaled that he would participate in a voluntary interview. But the committee insisted Mastriano be deposed on videotape, according to the lawsuit. Numerous other witnesses have already been deposed on camera, and clips from their interviews have been featured prominently in the panel’s hearings.

Mastriano’s lawyer, Timothy Parlatore, told the committee he wanted to make his own recording of the interview. But the Jan. 6 panel did not allow the move, the suit said, resulting in a stalemate. Mastriano appeared for a video-conference meeting with the committee in August but left without answering questions.

The suit describes portions of that video-conference conversation. In one exchange, Mastriano’s lawyer asked whether or not committee Chair Bennie Thompson (D-Miss.) actually issued the subpoena himself, or if it was issued by a staffer using an autopen. The suit then describes Mastriano’s counsel raising questions about whether deposition regulations were being followed regarding which two committee staffers would ask questions. When a representative for the committee started asking Mastriano questions, his counsel noted that Mastriano had not been sworn in, and they left the session.

A host of other litigants have gone to court to challenge the committee’s lawfulness, and none have emerged victorious. In the complaint, Mastriano’s lawyer says the narrow, specific issue they are raising — whether or not the committee must have a ranking member from the opposing party in order to conduct depositions — has not yet been litigated. He argues committee rules require the participation of a ranking member to conduct depositions. Since none of House Minority Leader Kevin McCarthy’s picks are on the committee, the suit contends, the panel cannot force people to be deposed.

The suit also raises concerns that video of Mastriano’s testimony could be deceptively edited.

Mastriano is an ally of former President Donald Trump and supported his post-election efforts to contest the 2020 results in Pennsylvania. Trump and attorney Rudy Giuliani both later backed Mastriano in the competitive Republican gubernatorial primary.