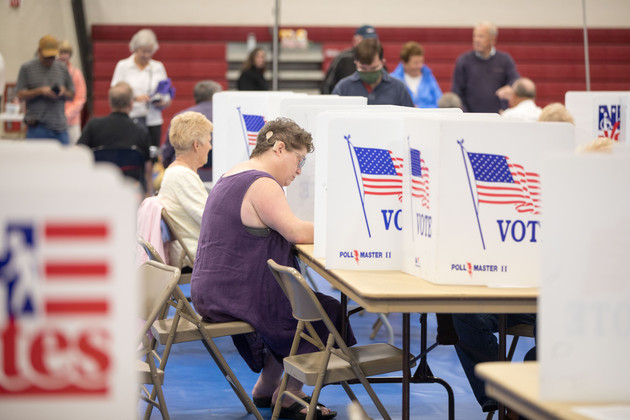 A voter fills out their ballot at Bedford High School during the New Hampshire Primary on September 13, 2022, in Bedford, New Hampshire. | Scott Eisen/Getty Images

The last party primaries of 2022 are wrapping up as the season began six months ago: with a close, expensive GOP brawl over a key seat in the evenly split Senate.

And Don Bolduc, a retired Army brigadier general who has eagerly adopted Donald Trump’s lie that the 2020 election was stolen, came away with the nomination despite millions of dollars that flowed into the race late. The funds came from a GOP super PAC backing state Senate President Chuck Morse over Bolduc, who was seen as a weaker general election candidate against Democratic Sen. Maggie Hassan. A major Democratic super PAC also jumped into the race to attack Morse.

The other big statewide contest is in Rhode Island, where incumbent Democratic Gov. Dan McKee won a battle for political survival against a crowded field of primary challengers. McKee took office in early 2021, after then-Gov. Gina Raimondo resigned to become U.S. secretary of commerce. His and New Hampshire Gov. Chris Sununu’s victories Tuesday evening ensured that no incumbent governor lost a primary in 2022.

After Tuesday’s primaries, there will be no other elections until the general election — and Louisiana’s unusual “jungle primary” contests — on Nov. 8. Here’s the latest from Tuesday’s elections:

The last of the ‘candidate quality’ battles in New Hampshire

Bolduc exemplifies broader concerns Republicans have about whether their Senate candidates can win this fall.

Republicans had high hopes for the race against Hassan, before seeing Sununu, the popular Republican governor, opt to run for reelection instead.

Since then, the GOP establishment has made a late push to back Morse — including a late endorsement from Sununu and a last-minute TV ad blitz from White Mountain PAC, a “pop-up” super PAC that won’t have to disclose its donors until after the election.

Senate Majority PAC, the major Democratic outside group focused on the Senate, launched ads days after White Mountain PAC attacking Morse as being a pawn of the “Mitch McConnell establishment.” Sununu has indicated he’d back Bolduc in November should the former general win on Tuesday, even after the two have very publicly traded barbs.

Former President Donald Trump sat out the race, though he praised Bolduc in a radio interview earlier this month and took a meeting with Morse recently.

No incumbent governor has lost in a primary this year, and McKee kept that trend rolling in Rhode Island on Tuesday.

McKee took office in early 2021, after the term-limited Raimondo decamped for Washington to join President Joe Biden’s Cabinet. Her departure gave McKee a jump-start on what was expected to be a competitive Democratic primary to succeed her.

He faced a competitive and fractured field that included Helena Foulkes, a former CVS executive and granddaughter of former Sen. Thomas Dodd; Nellie Gorbea, the state’s chief election officer who is vying to become the first Puerto Rican governor elected on the mainland; and former Rhode Island Secretary of State Matt Brown, a progressive who unsuccessfully challenged Raimondo in 2018. Foulkes finished in a close second behind McKee.

McKee will face Republican Ashley Kalus, a businesswoman and one-time staffer for Illinois Gov. Bruce Rauner, in the general election. He is the heavy favorite to win a full term of his own in November.

In the 1st District, Republican Karoline Leavitt beat out fellow Trump administration alum Matt Mowers in a contentious primary for the right to face Democratic Rep. Chris Pappas. The election there divided people in and around Trump’s orbit, but the former president stayed out of the race.

Biden carried the district by roughly 6 points in 2020, and Pappas defeated Mowers by a slightly smaller margin that year as well.

In the 2nd District, the primary to face Democratic Rep. Annie Kuster has diverged. Bob Burns, a longtime activist that has tied himself closely to Trump, holds a lead over the more moderate Keene Mayor George Hanse. Democrats have looked to boost Burns in the district, believing he is easier to beat, while a pop-up super PAC has gone in to back Hansel.

He will face Allan Fung, the former mayor of Cranston who lost the 2018 and 2014 gubernatorial elections to Raimondo. Republicans have touted Fung’s candidacy, but it has not yet attracted the big outside advertising campaigns that signal a truly hyper-competitive race.