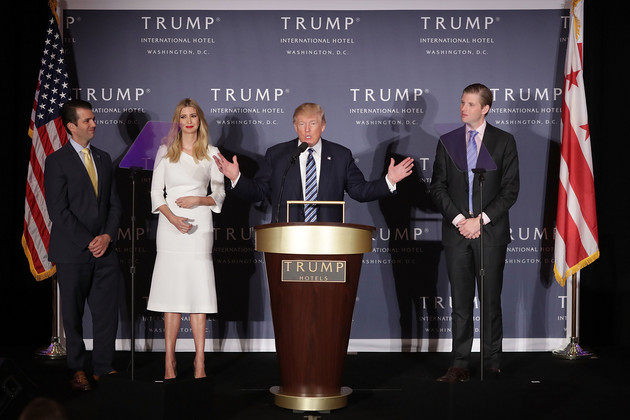 The attorney general’s suit seeks roughly $250 million in restitution, a five-year ban on Trump, Donald Trump Jr., Ivanka Trump and Eric Trump from buying any real estate in New York, and a permanent ban on the former president and his three eldest children from serving on any corporate board of New York companies or any business licensed in the state. | Chip Somodevilla/Getty Images

An attorney for Donald Trump on Wednesday called the New York attorney general’s lawsuit against the former president and the Trump Organization a product of the office’s “political agenda” and said she looks “forward to defending our client” against the claims.

“Today’s filing is neither focused on the facts nor the law — rather, it is solely focused on advancing the Attorney General’s political agenda,” Alina Habba, a Trump attorney who has represented the former president in New York-based and Trump Organization litigation. “It is abundantly clear that the Attorney General’s Office has exceeded its statutory authority by prying into transactions where absolutely no wrongdoing has taken place. We are confident that our judicial system will not stand for this unchecked abuse of authority, and we look forward to defending our client against each and every one of the Attorney General’s meritless claims.”

New York Attorney General Tish James announced a lawsuit earlier Wednesday against Trump, his three eldest children and the Trump Organization, alleging fraudulent financial practices spanning more than a decade. James also referred the matter to federal prosecutors and the Internal Revenue Service for criminal investigation. Trump himself said the investigation was “terrible” in an appearance Wednesday night on Fox News’ “Hannity.” “I actually thought because our values are really high. … I actually thought that they would never bring the case. And she brought it,” Trump said to host Sean Hannity. Trump said he was under the impression James wanted to settle, but that he still had a “problem” with the idea of settling, as he felt he wasn’t guilty of anything.

James said her office’s investigation uncovered evidence that Trump and his three adult children were involved in the creation of more than 200 misleading evaluations of the company’s finances and other other valuations of assets, such as falsely inflating the square footage of his apartment from 11,000 to 30,000 in financial filings.

“The complaint demonstrates that Donald Trump falsely inflated his net worth by billions of dollars to unjustly enrich himself and to cheat the system, thereby cheating all of us,” James said. “The pattern of fraud and deception that was used by Mr. Trump and the Trump Organization for their own financial benefit is astounding.”

The attorney general’s suit seeks roughly $250 million in restitution, a five-year ban on Trump, Donald Trump Jr., Ivanka Trump and Eric Trump from buying any real estate in New York, and a permanent ban on the former president and his three eldest children from serving on any corporate board of New York companies or any business licensed in the state.

Trump and his allies quickly slammed the suit as a “Witch Hunt,” an attack James got ahead of during her press conference in Manhattan.

“Mr. Trump and his allies may see these penalties are too harsh or that this is part of a witch hunt. I will remind everyone that this investigation only started after Michael Cohen, the former lawyer — his former lawyer — testified before Congress and shed light on this misconduct.” James said. “Claiming you have money that you do not does not amount to the art of the deal. It’s the art of the steal. And there cannot be different rules for different people in this country or in this state. And former presidents are no different.”

The suit from James’ office is the latest development in Trump’s swelling legal troubles. His attorneys are fighting in federal court this week to block the Justice Department’s efforts to investigate his handling of highly classified records at his Mar-a-Lago estate. In Georgia, a grand jury appears to be reaching a critical point in its election-related investigation, while former Trump aides and allies have been called to testify before a grand jury probing the former president’s efforts to overturn the 2020 election.

The Trump Organization and its longtime Chief Financial Officer Allen Weisselberg, who recently pleaded guilty to charges brought by the Manhattan district attorney’s office, is awaiting trial where he’s set to testify as part of his plea agreement with Manhattan District Attorney Alvin Bragg. Trump was not charged in that case, but James reiterated Wednesday that her office will work with Bragg’s office to provide any requested information and said her new suit is based in part on evidence related to Trump’s orders to Weisselberg to inflate various financial statements.