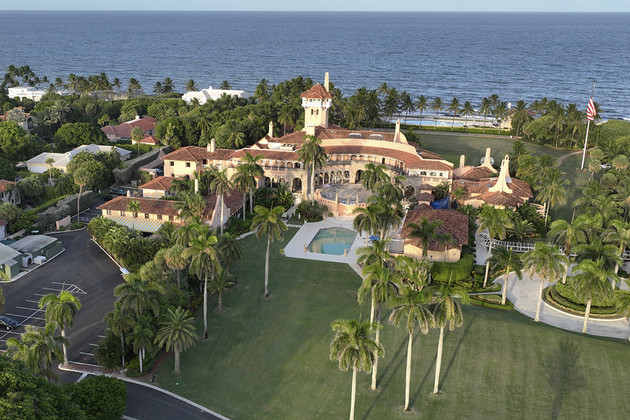 Former President Donald Trump on Friday denied reports that he was in possession of classified documents relating to nuclear weapons that FBI agents reportedly sought when they searched his Florida residence earlier this week.

“Nuclear weapons issue is a Hoax, just like Russia, Russia, Russia was a Hoax, two Impeachments were a Hoax, the Mueller investigation was a Hoax, and much more. Same sleazy people involved,” Trump wrote on Truth Social, tying his latest exchange with law enforcement to longstanding and oft-repeated grievances.

Trump’s pushback comes in response to a Washington Post article which cited unnamed “people familiar with the investigation” to report that FBI agents searched Trump’s Mar-a-Lago estate on Monday to look for nuclear documents that he could have taken from the White House. The Post reported that it remained unclear whether these types of documents were recovered in the search of Trump’s home, or whether the documents the FBI was searching for were related to the United States or another country.

Trump on Friday also echoed baseless assertions from Republicans in the days following the search that the FBI is biased against him and may have planted evidence as they searched Mar-a-Lago.

“Why wouldn’t the FBI allow the inspection of areas at Mar-a-Lago with our lawyer’s, or others, present,” Trump wrote on Truth Social. “Made them wait outside in the heat, wouldn’t let them get even close – said ‘ABSOLUTELY NOT.’ Planting information anyone? Reminds me of a Christofer [sic] Steele Dossier!”

Trump’s comments also come amid a wrangling between Trump and the Justice Department in the days following the search — in which the FBI executed a search warrant at Mar-a-Lago as part of an investigation into the alleged mishandling of White House records. Trump was not present at the search, which resulted in the seizure of paper records just a few months after the National Archives and Records Administration had confirmed it recovered 15 boxes of presidential records at Mar-a-Lago.

Trump’s attorneys were present at Mar-a-Lago during the search, although they have said they were limited by the FBI in what they could observe. In remarks to conservative media outlet Real America’s Voice, one of Trump’s lawyers said the former president was able to watch the search remotely from New Jersey via Mar-a-Lago’s system of security cameras.

Attorney General Merrick Garland on Thursday announced that the Justice Department would ask a federal court in Florida to unseal the search warrant executed at Mar-a-Lago, a warrant that Garland said he “personally approved.” Trump announced later Thursday that he would not oppose the department’s push to unseal the warrant.

Trump and his allies had previously blasted the DOJ for its silence on the search and its refusal to release the search warrant, a document Trump had a copy of and could which he could personally release at any time.

“Not only will I not oppose the release of documents related to the unAmerican, unwarranted, and unnecessary raid and break-in of my home in Palm Beach, Florida, Mar-a-Lago, I am going a step further by ENCOURAGING the immediate release of those documents,” Trump said Thursday in a Truth Social post.

DOJ’s decision to release the search warrant as well as the redacted receipt detailing what agents found inside Mar-a-Lago could shed light on the nature of documents Trump had stored at his Florida residence, as well as the potential crimes the department might be investigating.