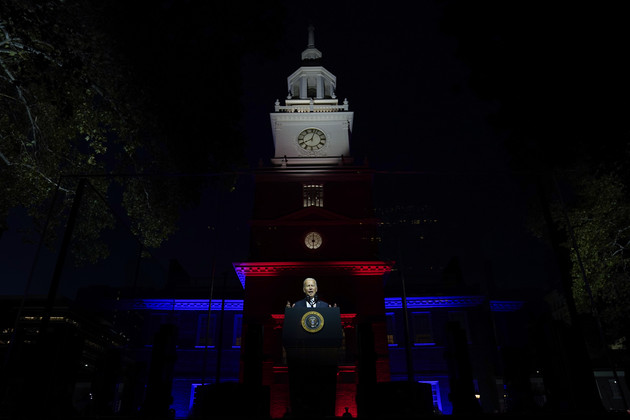 Biden will be in Pittsburgh for the city’s Labor Day parade, after traveling earlier this week to Philadelphia and Wilkes-Barre. | Evan Vucci/AP Photo

PHILADELPHIA — Former President Donald Trump is singling out Pennsylvania for his first rally of the general election on Saturday, where two of his most besieged candidates in the country are threatening to tarnish his record as a kingmaker.

The fact that he has zeroed in on the swing state for the politically symbolic Labor Day weekend, the unofficial kickoff of the midterms, demonstrates how pivotal Pennsylvania is to his success this year — and, more likely than not, a future presidential campaign.

Trump’s visit to the state also signals that he has prioritized coming to the aid of Senate candidate Mehmet Oz and gubernatorial hopeful Doug Mastriano, who have lagged behind their Democratic opponents in polling and fundraising.

But President Joe Biden is campaigning in Pennsylvania during the long weekend, too, an acknowledgment that the races here are far from over.

David Urban, a GOP strategist who was based in Pennsylvania when he served as a senior adviser for Trump’s 2016 campaign, called the dueling events by Trump and Biden “a little mano-a-mano foreshadowing perhaps — it’s an incredibly important state, whether it’s 1776 or 1986 or 2022 or 2024.”

Trump’s rally in northeastern Pennsylvania — also his first public event since the FBI searched his home in Mar-a-Lago — comes amid frustration among establishment Republicans that the former president has threatened their chances in an otherwise favorable political environment by endorsing weak or far-right candidates in the GOP primaries. Senate Minority Leader Mitch McConnell recently said that the House is likelier to flip than the Senate, citing “candidate quality.”

No state better illustrates the GOP’s anxieties than Pennsylvania: Oz, the celebrity doctor who won the Senate nomination by fewer than 1,000 votes after a critical endorsement by Trump, is now trailing Democratic Lt. Gov. John Fetterman by an average of more than 8 percentage points. That’s a wider margin than any other GOP Senate nominee is behind in a swing state.

Mastriano, meanwhile, is the second-most poorly positioned Republican gubernatorial candidate in the top battlegrounds, falling behind Attorney General Josh Shapiro by about 7 points. Mastriano ran as a full-throated MAGA warrior in the primary, though Trump only backed the state senator when he was already on track to win the nomination.

GOP leaders and political consultants aren’t the only ones who are going to scrutinize how many Trump-endorsed candidates are victorious this fall. Trump himself is obsessed with his win-loss record and regularly touts it on the campaign trail. Potential 2024 GOP candidates are also keeping an eye on it.

“His general-election win record is going to be incredibly important toward his 2024 prospects,” said a former Trump official. “If it’s perceived that he put his own interests over the party and good candidates who could have won, and the candidates he endorsed lose, that creates an opportunity for his opponents in early primary states to argue that the party suffered because of his selfish decisions.”

Republican and Democratic strategists said Oz has the most to gain from Trump’s visit because of his nagging problems unifying the party base.

Mastriano, the face of the effort to overturn the 2020 presidential election in Pennsylvania, has done a better job locking down Republican rank-and-file voters. In fact, he has focused almost exclusively on the base during the general election, making regular appearances in conservative outlets while icing out the mainstream press. Trump’s rally will be one of the first Mastriano events the national media is allowed inside to cover.

Many in the GOP still view Oz, on the other hand, as insufficiently conservative on abortion, gun rights and other key issues. When Trump held a rally in the state to boost Oz during the primary, Trump supporters in the crowd booed him.

“It’s not a bad thing for him to remind the Republican base he’s a much better choice than Fetterman,” said Josh Novotney, a Pennsylvania GOP consultant, of the former TV host popularly known as “Dr. Oz.”

A person close to Oz’s campaign said that the candidate’s internal polling has found that the “wounds from the primary … have pretty much healed up,” though they did not provide specifics.

Public polls — as well as other internals — have told a different story. An August survey by Susquehanna Polling and Research found Oz winning Republicans 78 percent to 13 percent, with 9 percent of GOP likely voters “still sitting on the fence.” Fetterman was ahead with Democrats 87 percent to 9 percent.

The location of Trump’s rally serves the dual purpose of attempting to troll Biden and build support for Mastriano and Oz in a key region: Trump will speak in Wilkes-Barre, just outside of Biden’s hometown of Scranton.

For his part, Biden will be in Pittsburgh for the city’s Labor Day parade, after traveling earlier this week to Philadelphia and Wilkes-Barre.

Luzerne County, where Wilkes-Barre is located, has played an outsized role in recent presidential and congressional elections. In 2016 Trump flipped the county, a white working-class area that was ancestrally Democratic, going a long way’s toward allowing him to capture the state. In 2020, Biden wasn’t able to take Luzerne, but he narrowed Trump’s margin of victory there and ran up the score in next-door Lackawanna County, helping him win back Pennsylvania.

In this year’s primary, Oz won both counties, giving him a jumping-off point to build from, though Fetterman received more votes in them than Oz.

For Mastriano, the counties were a rare weak spot on the map during the primary, likely because his top opponent hailed from northeastern Pennsylvania. Meanwhile, Shapiro, who is holding a campaign office opening on Saturday in Scranton, was the lone statewide Democratic candidate in 2020 to win Luzerne County.

“[Trump] will be incredibly well-received when he lands … it’s Trump country,” said Urban. “If you’re going to win in Pennsylvania, that’s where you need big Trump numbers.”

But the event, which will feature Oz, Mastriano and Republican congressional candidate Jim Bognet along with the former president, also comes with risks for the GOP. Trump is loathed by many of the suburban and independent voters they are trying to win over. The former president flipped the state in the 2016 presidential election, but narrowly lost it to Biden in 2020. In a sign of how toxic his brand is in some parts of the state, Oz erased some of the Trump branding on his web site and social media accounts after the primary ended.

Brittany Yanick, a spokeswoman for Oz, said he “looks forward to President Trump talking to Pennsylvanians about the importance of fighting the radical, liberal agenda in Pennsylvania.”

Mastriano, whose campaign did not respond to a request for comment for this story, said in an interview on a conservative podcast this week that Trump is “going to plug hard for myself and Oz” and “I expect he’s going to be swinging back because, as we discussed, what happened in Mar-a-Lago was unprecedented.”

Though the GOP’s concerns about Oz appear to have peaked over the summer, some national and Pennsylvania Republicans are still privately downbeat about his chances. They are worried that he may be too far behind in the polls to win, especially since voters begin casting ballots by mail in a few weeks.

And even though they have argued Fetterman is hiding from debates because he is in poor health after suffering a stroke in May, they don’t see that issue as likely to gain traction among voters, in part because Fetterman is on TV and he has been garnering positive headlines for his attacks on Oz on social media. They’ve also fretted about Oz’s ground game.

Republicans have been even more alarmed about Mastriano’s prospects. In the primary, GOP leaders were so fearful that he would lose the general election that they mounted a last-minute effort to coalesce behind one candidate in order to stop him. Some state Republicans grew more optimistic after the primary ended, but a TV advertising blitz by Shapiro over the summer went unmatched by Mastriano and the Republican Governors Association has yet to spend any money on his race.

But the last few weeks have given the GOP more hope in the state, particularly for Oz.

Some polls have shown a tightening race for the Senate, something both parties always expected to happen in the fall as more Republican money poured into the state. Oz has successfully recruited top conservative voices to rally around him, including on social media. And he has forced Fetterman to respond to his attacks over his criminal justice policy and unwillingness to commit to debates.

“I think Oz is in a pretty good position,” said Rob Gleason, the former chair of the Pennsylvania Republican Party. “Oz is getting around, doing his homework, doing town-to-town stuff. … Fetterman isn’t. He’s still wrestling with his post-stroke illness.”

As for Mastriano, Gleason said he “definitely has a chance because most people are going to vote against Joe Biden,” but “the big concern is he does not appear to be raising money.”

Joe Trippi, a Democratic strategist who managed Howard Dean’s 2004 presidential campaign, said that Trump and Biden’s upcoming visits to Pennsylvania demonstrate how tight the Senate and gubernatorial races could ultimately be — or perhaps already are.

“You’ve got the president of the United States and Donald Trump spending a lot of time in Pennsylvania,” he said. “It’s not because people think Mastriano doesn’t have a chance.”