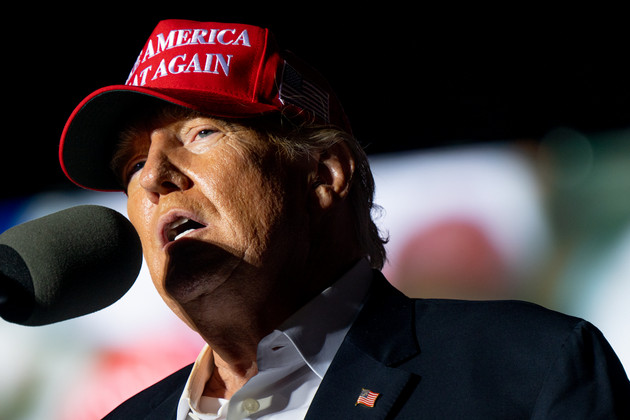 During an appearance on the Chris Stigall radio show that aired Tuesday morning in Philadelphia, Trump called the attack a “sad situation” but questioned if there was more to the story being detailed by law enforcement.

“Wow, it’s — weird things going on in that household in the last couple of weeks. Probably, you and I are better off not talking about it. The glass it seems was broken from the inside to the out so it wasn’t a break in, it was a break out. I don’t know, you hear the same things I do,” Trump said.

“It’s a lot of bad stuff and I’m not a fan of Nancy Pelosi, but what’s going on there is very sad,” Trump continued. “The whole thing is crazy, and if there’s even a little bit of truth to what’s being said. The window was broken in and it was strange the cops were standing there practically from the moment it all took place. So, you’re going to have to explain that to your audience, including me.”

Police reports of the incident have debunked several claims from conservatives surrounding the attack, including that the suspect David DePape, 42, previously knew Paul Pelosi and that there was no break in of the Pelosi home in San Francisco.

The FBI, in charging documents, said officers on the scene “secured a roll of tape, white rope, a second hammer, a pair of rubber and cloth gloves, and zip ties.” They also “observed a broken glass door to the back porch.” They said that DePape told them he had broken into the house through the glass door using a hammer and surprised Pelosi’s husband. DePape said he intended to confront Speaker Pelosi and to see her wheeled into Congress with broken kneecaps, “which would show other Members of Congress there were consequences to actions.”

The speaker was not in her home at the time that DePape entered it.

Trump is not the only conservative who has sought to place doubt on the idea that Speaker Pelosi was DePape’s target or to make light of it.

His son, Donald Trump Jr., posted a photo of a hammer and men’s underwear online. Dinesh D’Souza, the conservative provocateur and filmmaker of the widely discredited documentary on the 2020 election “2000 Mules,” has repeatedly questioned on Twitter the facts of the case and said he believed, without evidence, that the suspect was a “sex partner or male prostitute.” Billionaire Elon Musk also shared a tweet about the attack which has since been deleted claiming “there is a tiny possibility there might be more to this story than meets the eye.” That tweet, by Twitter’s new owner, included a link to the Santa Monica Observer, known for publishing falsehoods, that stated with zero evidence DePape was a male prostitute.