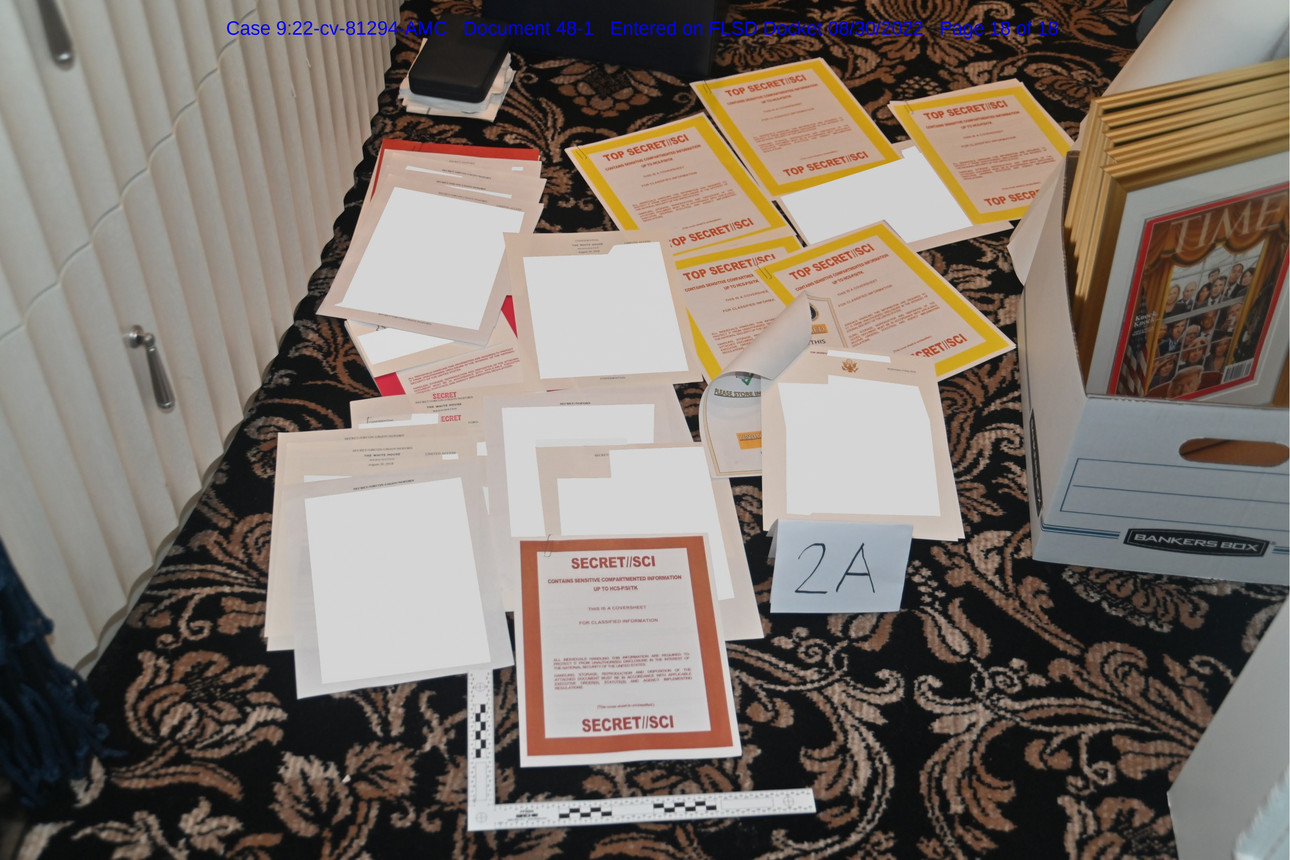 Prosecutors obtained a search warrant for former President Donald Trump’s Mar-a-Lago estate after receiving evidence that there was “likely” an effort to conceal classified documents there in defiance of a grand jury subpoena, a new Justice Department court filing released Tuesday night said.

The 36-page filing was the department’s most detailed account yet of its evidence of obstruction of justice, raising concerns that Trump and his attorneys sought to mislead investigators about the sincerity and thoroughness of their effort to identify and return highly sensitive records to the government.

“The government also developed evidence that government records were likely concealed and removed from the Storage Room and that efforts were likely taken to obstruct the government’s investigation,” Justice Department counterintelligence chief Jay Bratt wrote.

“That the FBI, in a matter of hours, recovered twice as many documents with classification markings as the ‘diligent search’ that the former President’s counsel and other representatives had weeks to perform calls into serious question the representations made in the June 3 certification and casts doubt on the extent of cooperation in this matter,” he added.

The much-anticipated court filing includes a startling redacted photo of some of the apparently classified files recovered from the so-called “45 Office” at Mar-a-Lago, spread across a carpet.

Numerous brightly colored cover sheets for classified information are visible bearing markings of “Top Secret,” “Secret” and “Sensitive Compartmented Information.” The contents of the documents, and even some of the classified headers, were whited out, leaving just a handful of dates visible. At least three of the documents bearing classification markings are on White House letterhead. A box of framed items, including a 2019 Time magazine cover depicting the then-Democratic presidential field vying to defeat Trump, sits nearby.

DOJ indicated that the “commingling” of Trump’s personal effects with classified materials is “relevant evidence of the statutory offenses under investigation.” Three classified documents were found in a “desk drawer,” prosecutors said, without providing further details. Trump’s claims that the items should be returned to him have no merit, they added.

“Any Presidential records seized pursuant to the search warrant belong to the United States, not to the former President,” Bratt argued.

The submission to a federal judge in Florida opposes Trump’s request for an independent third party to review the records the FBI seized during their Aug. 8 raid on the former president’s Florida compound. DOJ urged U.S. District Court Judge Aileen Cannon to oppose Trump’s request for a so-called “special master,” contending that his belated request was merely a bid to disrupt the investigation.

In particular, Bratt urged Cannon to reject Trump’s claim that any of the documents seized were subject to a claim of executive privilege by him — and therefore unrecoverable by the current administration.

“The former President cites no case — and the government is aware of none — in which executive privilege has been successfully invoked to prohibit the sharing of documents within the Executive Branch,” Bratt wrote.

Even if there were circumstances in which a former president could assert privilege, Bratt argues, this scenario would not come close. Intelligence officials are currently reviewing the recovered files to assess risks to national security, and any disruption to that could jeopardize the review, DOJ contends.

The Justice Department also noted that at a June 3 meeting at Mar-a-Lago, Trump’s aides treated the documents as though they remained classified, never contending that Trump had actually declassified them and producing some in “a single Redweld envelope, double-wrapped in tape.”

A Trump attorney then asserted in a certification letter to the government: “A diligent search was conducted of the boxes that were moved from the White House to Florida” and that “any and all responsive documents accompany this certification.” At the meeting, Trump’s attorneys insisted that no subpoenaed documents were held in any other parts of the property but “explicitly prohibited government personnel from opening or looking inside any of the boxes that remained in the storage room.”

Nevertheless, Trump declared Wednesday morning that he had in fact declassified the records shown in the photo, “for the public to see.”

“Lucky I declassified,” he said in a post on his social media site Truth Social.

Trump’s lawyers, however, have not contended that any of the files at issue were actually declassified. The lawsuit Trump filed last week makes no mention of Trump taking any steps to declassify records before leaving office.

The government’s filing is the Justice Department’s first response to Trump’s legal bid to dampen the ongoing DOJ investigation into his retention of highly classified documents in an unsecured storeroom and elsewhere at Mar-a-Lago.

Trump is due to respond to the government’s filing by Wednesday evening, and Cannon has called for a hearing on the matter Thursday afternoon in West Palm Beach. Requests for comment made to Trump representatives after Tuesday’s filing were not returned.

The Justice Department used the filing to forcefully rebut some of Trump’s claims about his interactions with the Justice Department and to unload more details about investigators’ private interactions with Trump and his lawyers. Among other details, the filing reveals that prosecutors took the matter seriously enough to ask the Washington, D.C.-based federal judge overseeing the investigation to permit the release of some grand jury information they had gathered in the course of the probe.

The threat of potential criminal charges against Trump has been intensifying for the last year, primarily as a result of investigations related to his efforts to subvert the 2020 election. The Justice Department has been interviewing witnesses connected to that effort, including senior figures from Trump’s administration. And an Atlanta-area grand jury led by District Attorney Fani Willis has been conducting a parallel probe that also has ensnared Trump’s top allies.

But the investigation into Trump’s handling of classified and national defense material exploded into public view this month after the FBI executed a search warrant at Trump’s Mar-a-Lago estate, removing dozens of boxes they identified as containing top secret and otherwise sensitive information.

The Justice Department recently described the investigation as being in its “early stages,” but it informed Cannon that a “filter team” had completed its search for potential attorney-client privileged information among the items seized, identifying a “limited set.”

In the new filing, prosecutors argue that Trump’s attorneys moved too slowly and that it would be pointless to appoint a special master at this point because investigators have already reviewed everything that was seized that was not set aside by the filter team. Doing so would only impede the ongoing criminal probe and disrupt the intelligence community’s review of potential risks to national security.

“The investigative team has already reviewed all of the seized materials that were not segregated by the filter team. Restricting further review by the government — including by the Intelligence Community — would therefore do little to protect Plaintiff’s purported interests or rights,” Bratt wrote.

“Typically, parties who seek the appointment of a special master following the execution of a search warrant make such requests immediately,” Bratt added.

While arguing against a special master, the filing does offer some suggestions for Cannon if she decides to do so anyway. Prosecutors say the special master should only review the seized records for potential attorney-client privileged information and not for other issues. In addition, the Justice Department says that if a special master “must be permitted to review classified documents,” that person should have a top-level security clearance already to avoid delay.

Prosecutors also asked for a tight timeline, arguing that if a special master is appointed, all work to sort out those privileges be completed by Sept. 30.

Trump hired a new attorney this week, former Florida solicitor general Chris Kise, to represent him in the criminal case that led to the Mar-a-Lago search. Other lawyers who have represented him in the matter include D.C.-based attorneys Evan Corcoran and James Trusty, as well as Florida-based attorney Lindsey Halligan.