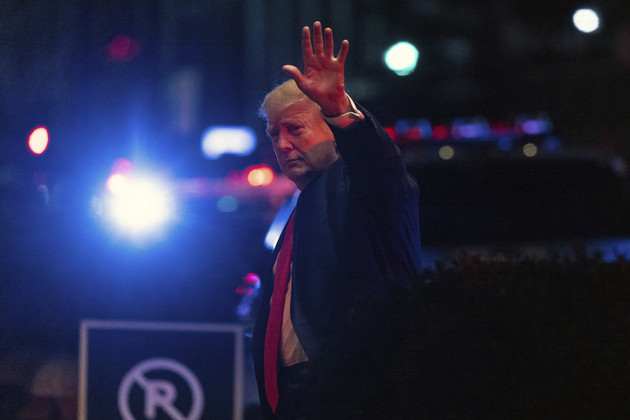 A wave of concern and even paranoia is gripping parts of Trump world as federal investigators tighten their grip on the former president and his inner circle.

In the wake of news that the FBI agents executed a court-authorized search warrant at Donald Trump’s Mar-a-Lago residence in Florida, Trump’s allies and aides have begun buzzing about a host of potential explanations and worries. Among those being bandied about is that the search was a pretext to fish for other incriminating evidence, that the FBI doctored evidence to support its search warrant — and then planted some incriminating materials and recording devices at Mar-a-Lago for good measure — and even that the timing of the search was meant to be a historical echo of the day President Richard Nixon resigned in 1974.

“There are no coincidences when it comes to the Deep State. They could have done this raid a couple of days before or tomorrow, but they chose Aug. 8 for a reason,” Monica Crowley, a former top official in the Trump Treasury Department, said on the “War Room” podcast.

Trump world is no stranger to being deeply suspicious, even conspiratorial. But the speculation sparked by the FBI search has taken on a different scope, coming amid a combination of anxiety — that the so-called Deep State is out to get the former president — and a dearth of public information about the bureau’s actions.

“I can tell you all of us agree this is corrupt,” said Michael Caputo, a longtime Trump confidante whose service in the Trump administration was marked by attacks he waged on career officials and an acrimonious exit. “Many people in Trump world agree with me that this is theater and this is designed to damage the president, this is designed to damage Republicans in the midterms and it is designed to advance the interests of the Democratic Party. And you know what, they completely failed.”

There is no evidence that the Department of Justice did anything improper, and it in fact obtained approval from a federal court to obtain its search warrant. Trump himself could answer some of the lingering questions. He is at liberty to disclose the warrant — though he has not been provided the underlying affidavit — and to describe the files that were confiscated by the FBI. But so far he has opted against doing so. Only two of his attorneys were present during the search, and they say they were barred from supervising while the agents retrieved files.

More information may soon be available, however. Judge Bruce Reinhart, the federal magistrate who signed the search warrant last week, on Wednesday ordered the Justice Department to respond by Monday to efforts by media outlets and advocacy groups to unseal the document.

In the absence of that information, however, Trump allies have begun pushing conspiracies to explain away the probe.

The chatter was fed, in part, by two articles, one in Axios the other in Newsweek, that suggested someone high up within Trump’s orbit had flipped and was cooperating with the government and that detailed the belief among some Trump hands that they had a mole. By late Wednesday afternoon, it had become an openly discussed topic on Fox News. And a story in The Wall Street Journal indicated that, in fact, a witness had been aiding investigators, telling the FBI that not all classified records had been disclosed during early negotiations and helping investigators pinpoint the location of missing records.

But the more aggressively pushed theory by Trump allies, at least in public, was the idea that evidence might have been planted by the FBI on the premises. Trump himself floated the idea in a post on his social media site, and it was amplified by Sen. Rand Paul (R-Ky.), as well as Fox News hosts like Jesse Watters, and even Trump’s own lawyer.

“I’m concerned that they may have planted something,” Trump attorney Alina Habba said Tuesday on Fox News. “At this point, who knows? I don’t trust the government, and that’s a very frightening thing as an American. This is Third World stuff. This is Cuba. This is not our country.”

Trump and his advisers have worked to use the FBI’s search to their political advantage, too. In the aftermath, the former president took calls from allies and lawmakers on Capitol Hill who encouraged him to expedite his jump into the 2024 presidential race. And on Monday night, Trump met with the Republican Study Committee at his Bedminster golf club in New Jersey, where he talked about his outrage over the events and hinted at what he would do next.

“He left me a little room to doubt that he’d be running again, and he received substantial encouragement in the room to run again,” Rep. Jim Banks (R-Ind.) told POLITICO. “And his campaign activity leading up to the midterm helps turn out voters.”

In the 48 hours since the search, Trump’s Save America PAC released a new political ad linking the search to New York Attorney General Letitia James’ civil investigation of Trump and to the Jan. 6 investigations. And Trump has been aggressively fundraising off the search, sending out emails and text messages decrying the FBI’s actions and asking for contributions.

Republican lawmakers, ranging from House Minority Leader Kevin McCarthy to Rep. Elise Sefanik (R-N.Y.), have vowed to make investigations into why federal agents issued the search warrant a political issue moving into the midterms and beyond.

“I will be shocked if a Republican majority doesn’t pursue a 21st century Church Committee out of this, that’s where I think this is going,” said one Republican consultant close to Trump world, referring to 1970s congressional hearings on intelligence activities. “I do think there have been enough examples of politicization in institutions that this is where Republican voters are. Republicans have been there for a bit of time — but a lot of Republican politicians have gotten the message.”

Olivia Beavers contributed to this report.