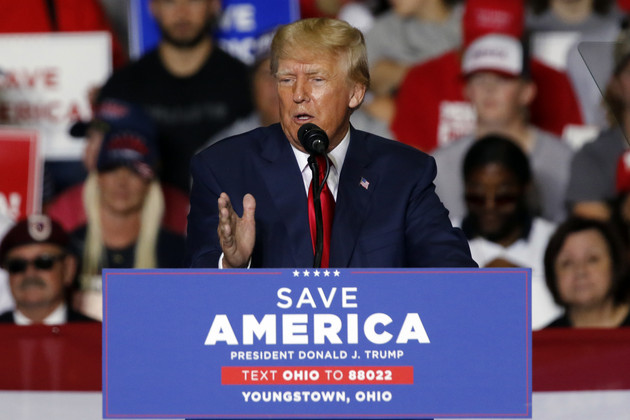 Fundraising by former President Donald Trump’s primary political group briefly quadrupled for a few days after the FBI searched his South Florida property in August. But the group also reported a significant increase in fundraising expenses during the third quarter, according to a POLITICO analysis of new campaign finance filings.

The data provides further evidence of how law enforcement’s decision to seize classified documents from Trump’s resort energized the former president’s base. And it shows how the former president’s political operation is churning through the GOP’s small-donor pool at an accelerating pace as a potential comeback campaign draws near.

The Save America Joint Fundraising Committee reported just over $24 million raised in the third quarter of 2022, up from $17 million in the second quarter. Nearly 20 percent of the group’s third-quarter fundraising came in the week after the Aug. 8 FBI search of Mar-a-Lago. That includes $2.2 million that came in on Aug. 9 and 10 alone, according to a new campaign finance report from WinRed, the online fundraising conduit used by Save America and numerous other Republican groups.

Previous reporting indicated that Save America received a surge in donations in August, but the specific amount was unknown.

The joint fundraising committee has been Trump’s primary vehicle for raising money from donors since launching in February 2021. It gathers money for two groups — Save America and Make America Great Again PAC — that have helped cover some of Trump’s legal bills this year, paid for costs associated with his rallies, backed his preferred candidates in primaries and made campaign contributions.

Trump remains the GOP’s best online fundraiser, with his joint fundraising committee bringing in more via WinRed than any other group during the third quarter, according to filings. But the committee also significantly increased its spending on categories linked to fundraising in order to do it, growing its donor base — but at significant cost.

The group, which often sends several text messages a day, spent more than $7 million on SMS advertising in the third quarter, according to its campaign finance filing, along with another $7 million on online advertising and $2.8 million on list rentals.

“MAR-A-LAGO was RAIDED,” read one text sent late in the evening on Aug. 8, hours after news broke of the FBI’s search. “America is corrupt. We must return the power to the people. Will you fight with me?” The text included a link to donate to the Save America Joint Fundraising Committee.

The three expenses — texting, online advertising and list rentals — together offset about 70 percent of what the joint fundraising committee raised this quarter. They also accounted for a significantly greater use of funds that the group had put toward those same purposes previously. In each of the first two quarters, it put only $3.5 million toward SMS advertising, for example, according to FEC reports. Its spending on list rentals had not previously exceeded $1 million in a single quarter.

A Trump spokesperson noted the tactic had helped Save America grow its list of donors. About 30 percent donors who gave to the former president’s group in the third quarter had not previously made contributions on WinRed in 2021 or the first half of 2022, according to a POLITICO analysis of WinRed’s filing.

“President Trump, through his America First agenda and bold leadership, continues to fuel the growth and strength of the GOP ahead of the 2022 Midterms and beyond,” spokesperson Taylor Budowich said in a statement. “Voters are engaged and motivated at a truly unprecedented level because of his unique ability to energize Americans around the candidates and causes that will Make America Great Again.”

Other GOP candidates and groups also saw a rebound in online fundraising in the third quarter, after the number of individual donors giving through WinRed had unexpectedly dropped in the first half of 2022. While Trump saw most of the gains associated with greater GOP donor activity after the Mar-a-Lago search, contributions via WinRed to other groups were about 20 percent higher in the days after the search than a typical day. Some Republicans have alluded to the raid in fundraising appeals, although they have not made it a central campaign issue.

Other events in the past few months have not had a similar fundraising effect. For example, Save America also did not see a noticeable surge in donations a month later when New York Attorney General Tish James announced a civil lawsuit against Trump and his adult children, which alleged wide-ranging fraud at the Trump organization.

Trump also launched a super PAC called Make America Great Again Inc. that has poured more than $8.8 million into Senate races in Georgia, Nevada, Arizona, Ohio and Pennsylvania so far this month, according to data from AdImpact. Details about the super PAC’s funding were not reported on its last campaign finance report, which only covers through the end of September.