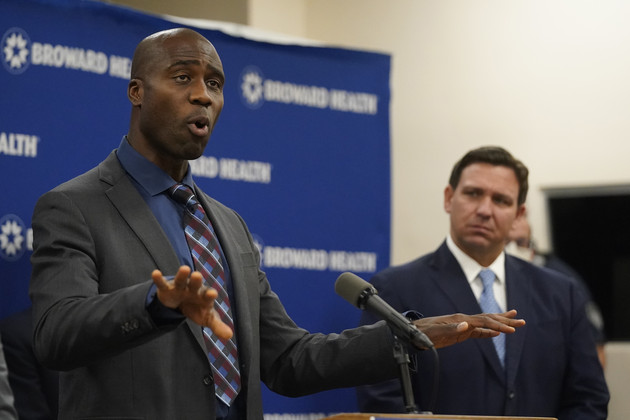 Twitter blocked — and then restored — a post from Florida Surgeon General Joe Ladapo that was promoting an analysis claiming a high incidence of cardiac-related deaths among men who take the mRNA Covid-19 vaccine.

Ladapo, who posted the tweet Friday, had also recommended men aged 18-39 should not receive the mRNA vaccine. Ladapo is an outspoken skeptic of Covid-19 vaccines who has questioned both the effectiveness and safety of the vaccine despite consensus within the medical community that the vaccines help protect against the virus and can lessen severe symptoms.

“Our current misleading information policies cover: synthetic and manipulated media, COVID-19, and civic integrity,” Twitter stated in its post that blocked Ladapo’s tweet. “If we determine a Tweet contains misleading or disputed information per our policies that could lead to harm, we may add a label to the content to provide context and additional information.”

Ladapo has previously recommended that young children should not receive the Covid-19 vaccine. The Florida Department of Health over the summer did not pre-order vaccines for children aged 5 and under even though 49 other states did in the lead-up to the Food and Drug Administration issuing emergency authorization for young kids to receive the Pfizer and Moderna shots.

Johns Hopkins Medicine, the Mayo Clinic, the Centers for Disease Control and Prevention and the FDA have all stressed that the vaccine is safe and urged the public to get vaccinated.

“This is an unacceptable and Orwellian move for narrative over fact,” said Bryan Griffin, the governor’s press secretary, in a tweet. In a follow-up tweet later Sunday after Twitter restored the post, he thanked people for bringing attention to it.

His Department of Health in June threatened the Special Olympics with a $27.5 million fine for requiring thousands of participants to show that they had been vaccinated against Covid before competing in games at an Orlando event. Florida stated that the proof of vaccination requirement violated the state’s law against such a mandate.

Powell’s Interest-rate Antibiotics Could Succeed, but Not Without Risk