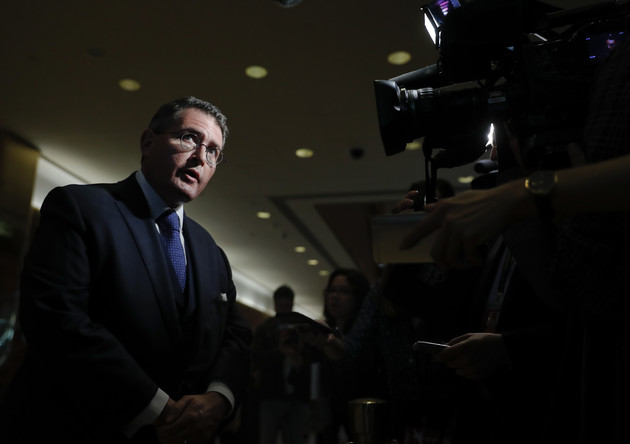 One of the biggest conservative dark money organizations in the nation was boosted last year by two separate anonymous gifts, each totaling more than $425 million dollars.

The money sent to DonorsTrust, a 501(c)(3) charity that has become one of the most influential conduit of funds in Republican-leaning circles, was a huge chunk of the more than $1 billion the group brought in in 2021, according to a tax filing obtained first by POLITICO. They are among the largest ever donations to a politically-connected group.

DonorsTrust used those funds to support a vast network of prominent conservative causes, including a $17.1 million gift it made to The 85 Fund, a group founded by a major engine of the conservative movement: Leonard Leo. All told, DonorsTrust spent about $192 million last year and entered 2022 with roughly $1.5 billion in assets.

Under law, the individual or individuals behind those $425 million donations were not required to be disclosed to the public. DonorsTrust did not reveal them. It is just the latest and one of the more remarkable illustrations of the opaque financing of the current political ecosystem.

DonorsTrust, a donor-advised fund, has doled out over $1.5 billion since its founding in 1999, according to the group’s website.

“2021 was a tumultuous year in the nation’s civic mindset with turbulent elections, the abatement of government-mandated lockdowns and school closings, and the beginning of a global economic crisis,” Lawson Bader, president and CEO of DonorsTrust, said in a statement. “Our givers recognized not only how damaging these were at the time, but how damaged they left us in the long-term. Consequently, our donor-advisors are ensuring a revenue stream to invest in non-profits committed to healing and restoring our frayed social fabric.”

The money raised in 2021 dwarfed previous yearly totals by hundreds of millions of dollars. In 2020, the group brought in about $360 million in total revenue. The ability to keep donor identities private has made groups like DonorsTrust an increasingly utilized vehicle for political-minded givers on both sides of the aisle.

Michael Beckel, research director for the political reform advocacy organization Issue One, likened such an organization as an “ATM for dark money groups.”

“Groups like DonorsTrust are becoming increasingly part of the equation of how money from special interests and wealthy Americans ends up in the coffers of dark money groups,” he said. “Voters are kept in the dark about the true source of the funds involved.”

DonorsTrust reported just three gifts in 2021, according to its tax filing. One contribution was listed for $427 million, and another for about $77 million. The third donation was worth roughly $426 million — but not in cash. DonorsTrust noted that on Dec. 30, 2021, it received hundreds of millions in “closely held common stock in a C-corporation.” It did not provide greater details on the identity of that investment.

As a 501(c)(3) charity, donations to DonorsTrust are tax-deductible. And in giving hundreds of millions worth of stock, the anonymous donor or donors behind the roughly $426 million gift could avoid paying taxes on the capital gains, according to Philip Hackney, a professor at the University of Pittsburgh School of Law and a former IRS official.

Bader said in a statement that DonorsTrust also received hundreds of smaller-dollar contributions in 2021. However, those donations — not listed in the group’s filing with its largest gifts — represented a fraction of the total haul.

A number of the groups that received DonorsTrust funding are directly working to push conservative causes before the judiciary. Leo’s 85 Fund received the largest donation by a magnitude of millions. The co-chairman of the Federalist Society, Leo had significant influence in former President Donald Trump’s Supreme Court nominee selection process and maintains a network of groups that continue to push conservative causes.The Federalist Society itself received a total of about $3.7 million.

In addition, the Constitutional Defense Fund, a group purporting to fund litigation around abortion, voter fraud, and other conservative issues, received about $3.8 million from DonorsTrust.

As a 501(c)(3), DonorsTrust may not explicitly advocate for or oppose a given candidate. However, the group appeared to spend heavily to support redistricting and election-related organizations. Fair Lines America Foundation, a group that is focused on redistricting and linked to the National Republican Redistricting Trust, received $1.4 million. The right-wing think tank Foundation for Government Accountability received about $2.7 million from DonorsTrust, with $25,000 itemized for “election integrity efforts.” True the Vote, a vote-monitoring group celebrated by Trump that has questioned the legitimacy of the 2020 election, received $250,200.

Consumers’ Research, a group that has run ads attacking so-called “woke” corporations, received nearly $6 million. The State Policy Network, a coalition of conservative think tanks and other groups, received about $9 million, including $75,000 itemized for donor privacy efforts. DonorsTrust is listed as an affiliate of the group, along with the Federalist Society.

An affiliated donor-advised fund, Donors Capital Fund, reported about $11.7 million in assets at the end of 2021, according to its tax filing obtained by POLITICO.