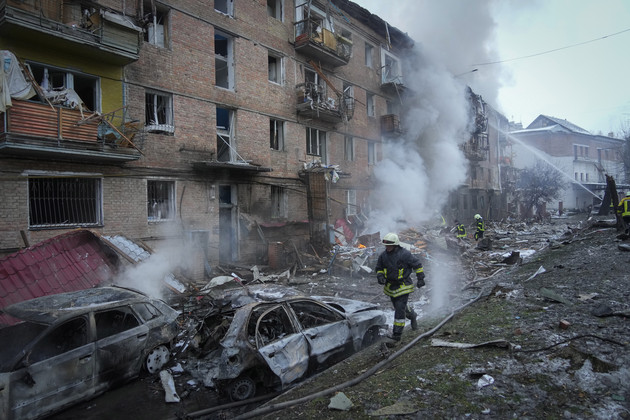 Ukrainian State Emergency Service firefighters work to extinguish a fire at the scene of a Russian shelling in the town of Vyshgorod outside the capital Kyiv, Ukraine, Wednesday, Nov. 23, 2022. | Efrem Lukatsky/AP Photo

Biden administration officials have assessed that Russian President Vladimir Putin may use chemical weapons in Ukraine first before resorting to a nuclear confrontation with NATO if his troops continue to lose ground.

The concerns, according to six people with knowledge of the matter, come amid a push by the administration to ensure allies are prepared for such an event, as well as to mobilize new resources and investments in manufacturing of detection systems for when the chemicals are used. The people, who spoke on condition of anonymity to discuss sensitive, internal deliberations, include U.S. and Defense Department officials.

The U.S. does not have any intelligence to suggest such an attack in Ukraine is imminent, the people said. In fact, many DoD officials believe the fighting will stall during the winter months, with neither side able to take much ground.

But in the case of continued battlefield losses, or a complete collapse of the Russian army, some top officials working on the issue have determined that Moscow might resort to employing chemical weapons — including those the country has been associated with using in the poisoning of Alexei Navalny.

Such an attack would involve chemicals that are easily concealed, making it more difficult for Western countries to pin on Moscow, one official said. Russia could use pharmaceutical-based agents — known colloquially as PBAs, that official said. Some chemicals could be used for a mass casualty attack even though Moscow has been known to use the nerve agent Novichok against one or two people at a time, officials and experts said. For example, some chemicals can be turned into an aerosol or used in munitions to inflict damage on a large group of people.

The U.S. has long known that Russia is investing in increasing its chemical weapons capability. Senators this fall were briefed about Russia’s chemical weapon stockpile and the threat in Ukraine, according to a congressional aide. But the concerns about their potential use in Ukraine come as U.S. officials increasingly believe that Russia will resort to unconventional warfare if it continues to lose ground.

That assessment is pushing the Biden administration to improve detection and preparation for a potential chemical attack. This fall, the Pentagon sent teams to Eastern European countries to refresh their armed forces on procedures in case of a chemical or biological threat, according to a DoD official and another person familiar with the effort. Meanwhile, the United States has provided Kyiv with chemical, biological and nuclear protective equipment as part of billions of dollars in security assistance.

Senior officials are also pushing to rework the U.S. approach to both preparing and responding to potential chemical weapons attacks by various actors, including Russia. The Biden administration is developing plans to increase investment in manufacturing capabilities for early detection systems and wearable technology such as masks. It also wants to reevaluate how to gather better data and intelligence on countries’ capabilities and stockpiles.

The U.S. ramped up efforts to track Russia’s use of Novichok, a nerve agent, after the international community linked it to the poisoning of Navalny, an outspoken opponent of Putin, and Sergei Skripal, a British citizen who used to work as a Russian intelligence officer.

In 2018, Skripal and his daughter needed medical intervention after coming into contact with Novichok. And in 2020, Navalny was hospitalized in Germany where officials said there was “unequivocal proof” he was poisoned via Novichok while aboard a flight. Both men are still alive.

Russia has also been associated with the use of chemical weapons in Syria. The U.S. has accused Moscow of helping the Syrian government cover up its use of banned toxic munitions during its civil war.

Experts and officials said tracking pharmaceutical-based agents and gathering intelligence about their development, particularly for offensive purposes, has become increasingly difficult. The substances used to develop chemical weapons are concealed easily and can be embedded within legitimate industries, said Gregory Koblentz, director of the Biodefense Graduate Program at George Mason University.

“Our traditional intelligence methods that we’re really good at, like satellite imagery and signals intelligence, aren’t really that useful for telling you what’s going on inside one of these core biological facilities,” Koblentz said. “You really need human intelligence to do that, which is very hard to get.”

There have been signs that Russia may resort to unconventional warfare. Intelligence by the U.S. this fall showed senior officials believed Russia could use nuclear weapons in an act of desperation. And in October, Russian officials claimed that Ukraine was preparing a false flag operation by detonating a “dirty bomb” on its own territory, and put its forces on alert to respond to a potential chemical, biological or nuclear weapons attack.

Western leaders rejected the claims, warning that Moscow might use the false accusation as a pretext to escalate the conflict. U.S. officials expressed concern at the time that Russia could itself could use a dirty bomb, a weapon improvised from radioactive nuclear waste material and conventional explosives, and then blame Ukraine for it.

During the crisis, U.S. officials made a flurry of phone calls to their Ukrainian and Russian counterparts, and concern over a potential dirty bomb threat has “tamped down a bit,” said one senior DoD official.

Officials do not believe that either a nuclear or chemical attack is likely. Defense officials believe the fighting will slow during the winter months when rain and mud makes it more difficult to move tanks and armored vehicles, and neither side will make much progress on the battlefield. Despite Kyiv’s hard-won victory in taking back the strategic southern city of Kherson, they see hard fighting ahead to retake ground on the eastern side of the Dnieper River, where Russian forces have consolidated.

“They don’t have the military mass to win in the near term, short of a major Russian collapse,” said one DoD official. That “could happen, but then we go up the escalation ladder.”

Still, the threat of chemical weapons is being taken seriously within the administration, officials said.

“We’ve always been aware that they have the means and capability to use these types of weapons,” said one Pentagon official. “Our assessment remains the same. We maintain close observation of this conflict, but we’ve not seen anything that would make us change our posture.”

In recent months, without providing evidence, Russian officials have claimed publicly that the U.S. possesses a secret biological weapons program. For the first time in nearly 25 years, Russia this year called a hearing related to its allegations under the Biological Weapons Convention, an international treaty signed in 1975 to prevent countries from developing and using biological weapons.

Officials and experts say it’s an attempt by Russia to push disinformation as a way to discredit the U.S. as it continues to ramp up support for Ukraine on the battlefield.