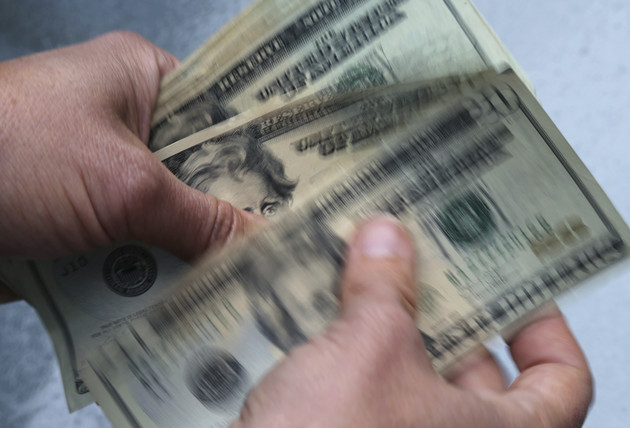 Millionaires received an average of $13,900 in benefits, according to the figures. | Elise Amendola/AP Photo

Some of the nation’s wealthiest people were among the tens of millions of Americans who received unemployment checks in the wake of the coronavirus outbreak.

More than 19,000 people who made at least $1 million in 2020 also collected jobless assistance that year, new IRS data show. That included 4,500 people who earned between $5 million and $10 million and 229 people with eight-figure incomes or more.

Millionaires received an average of $13,900 in benefits, according to the figures.

Experts cited a number of reasons for the seeming anomaly, including expanded benefits approved by Congress to fend off an economic collapse amid widespread layoffs and business shutdowns.

“Tens of millions of workers were thrown out of their jobs in 2020 and it was a really wide range of people — it included people who had been making really good incomes,” said Amy M. Traub, senior researcher of social insurance at the National Employment Law Project.

It’s a small, though surprising, share of the nearly 30 million tax returns that reported receiving unemployment aid that year.

The figures were included in a trove of data released by the IRS, though the department doesn’t say how people made enough money to put them in the top 1 percent of incomes — $591,000 in 2020 — while collecting unemployment aid in the same year.

Probably some of those receiving aid had more typical earnings but were married to highly paid people with whom they filed their taxes jointly, experts speculated. It may also include small business owners made eligible for assistance for the first time that year.

“A bunch of places just shut down,” said Mark Mazur, a former top Biden administration tax official. “People were told they should file for unemployment and they did, and the states generally made it pretty easy.”

“You’d think the millionaires who had that opportunity would be among the most well-advised people.”

The figures also show how the total number of people receiving unemployment checks exploded in the wake of the pandemic, dwarfing what was seen in the Great Recession.

In 2009, amid the Great Recession, 11.3 million returns reported jobless benefits.

Unemployment skyrocketed in the early months of the pandemic, amid stay-at-home orders and overnight business shutdowns. By April, the jobless rate had more than quadrupled to 14.7 percent.

Congress approved a big expansion of unemployment aid that increased how much people could receive, how long they could receive it and expanded the number of people who could qualify to include the self-employed, independent contractors, gig workers and others.

The aid is credited with not only helping people stay afloat but preventing a deeper economic downturn.

Benefits are available to people regardless of how much they earn — it is a type of insurance, not a traditional government benefit program. Aid is financed though federal and state taxes imposed on employers.

“Unemployment insurance is intended to be a support for workers who lose their jobs and people who had been earning a good income before they were laid off also deserve to get those benefits,” said Traub.

The vast majority of assistance — nearly 90 percent — went to people making less than $100,000, the data show.

Millionaires received a total of $264 million in aid, which amounts to less than one percent of all the unemployment benefits reported.