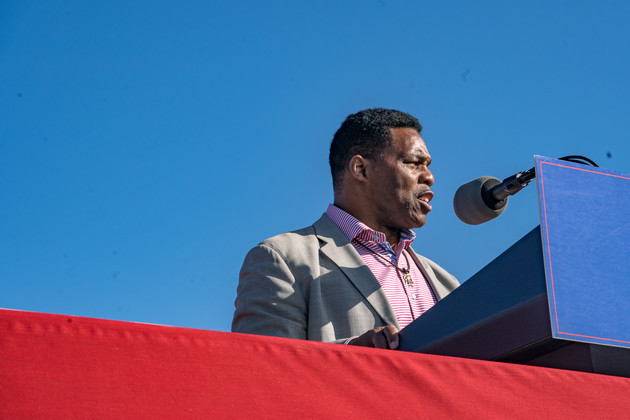 As powerful as Herschel Walker’s high name recognition in his state may be, his penchant for going off-script may neutralize it. | Megan Varner/Getty Images

As Sen. Kevin Cramer (R-N.D.) sees it, Democrats are pushing for the former NFL star to debate their incumbent in Georgia’s hotly contested Senate race because “they feel like that’s an advantage for their side. And I don’t think Herschel Walker should do anything that gives his opponent an advantage.”

But Cramer also warned his party not to choreograph Walker too closely as the former President Donald Trump-backed Republican tries to evict Warnock from the Senate: “Talking a lot, you make mistakes. Not talking, you don’t make mistakes. Except for the mistake of not talking … people are much more forgiving of your gaffes if you’re talking to them a lot.”

The Warnock-Walker matchup in Georgia isn’t the only midterm race where the Senate GOP is starting to worry about blowing it in a tough environment for Democrats. From Pennsylvania to Ohio to Georgia to Arizona, Republicans are being outraised and not yet running away with must-win races that they need to flip the Senate in November.

And as powerful as Walker’s high name recognition in his state may be, his penchant for going off-script may neutralize it. With Walker trailing Warnock even as Republican Gov. Brian Kemp leads Democrat Stacey Abrams, the party is paying close attention.

The National Republican Senatorial Committee sent staff down to Georgia to aid Walker’s campaign, according to two people familiar with the matter, and he shuffled his campaign team. Walker also made lower-profile public appearances on the trail after going viral with confusing remarks about air pollution, revealing several previously unknown children and backing a national abortion ban that divides the GOP.

Now Warnock is trying to draw Walker into a debate to further expose the Republican’s erratic rhetoric.

“We’ve got some strong candidates. Some that, I think, are less strong,” said Sen. Mitt Romney (R-Utah). “Let’s just say Herschel Walker, I think, is having a hard time getting his running legs back.”

Across the country, Republicans are trying to smooth out their Senate candidates as they try to ride historically high inflation and President Joe Biden’s sub-40-percent approval ratings back to the majority. Republicans need only a net gain of one seat in November to win Senate control next year.

Warnock’s seat in Georgia is widely viewed as one of the best GOP pickup opportunities, along with Nevada, Arizona and New Hampshire. To make good on those chances, most Republicans want the midterms to be a clean referendum on Biden rather than the quality of their candidate.

“It’s really going to come down to a choice about: Is he going to be a vote for or against the Biden agenda,” said Senate Minority Whip John Thune (R-S.D.). “It’s a fairly straightforward choice for the voters of Georgia.”

Still, one Republican operative involved in Senate races said behind the scenes that, earlier this summer, “there was almost existential concern” about the Walker campaign. This Republican, who spoke candidly on condition of anonymity, said there’s still time for a course correction but that “if the election were today, he would not win.”

The Walker campaign did not respond to a request for comment.

Republicans are taking an exceedingly light touch in their Senate primaries, to mixed results. Four high-profile governors passed up campaigns: Chris Sununu of New Hampshire, Doug Ducey of Arizona, Larry Hogan of Maryland and Phil Scott of Vermont. And they’ve had to contend with the former president’s efforts to play kingmaker: Trump encouraged Walker to run in Georgia and helped make J.D. Vance and Mehmet Oz the Republican nominees in Ohio and Pennsylvania.

At the same time, Republicans have not nominated a candidate who’s a surefire bet to lose a potential battleground, as they did in the Maryland and Illinois gubernatorial races. GOP voters spurned Democrats’ attempts to boost a far-right candidate against Sen. Michael Bennet (D-Colo.), former Missouri Gov. Eric Greitens’ toxic candidacy appears to be fading and Pennsylvania’s GOP electorate rejected bomb-thrower Kathy Barnette. On top of those upsides, most Republicans see Nevada as their best pickup opportunity.

But while the GOP super PAC Senate Leadership Fund is set to outspend its Democratic rival, candidate fundraising can make a huge difference because of favorable ad rates that campaigns receive. And in Ohio, Rep. Tim Ryan dramatically out-raised (and out-spent) Republican nominee Vance, while polling in the state Trump won by 8 points in 2020 hasn’t shown Vance with a commanding lead.

In Pennsylvania, Democratic Lt. Gov. John Fetterman continues to lead GOP nominee Mehmet Oz in polling, fundraising and favorability, despite taking more than two months off the trail following a life-threatening stroke in May. Oz secured the nomination only after a primary race recount, which forced the TV doctor to spend time shoring up relationships with disenchanted party activists.

Still, Senate Republicans insist those races will come back toward the GOP. NRSC Chair Rick Scott (R-Fla.) defended the quality of GOP candidates even as he acknowledged some have “got a lot of work to do catching up on the fundraising.”

“Democrats are doing a good job on fundraising, but the environment is so bad,” he said.

Sen. Rob Portman (R-Ohio) predicted that Vance would still win, in part because Ohio is “redder than it used to be.” Meanwhile, Sen. Pat Toomey (R-Pa.) called concerns about Oz trailing Fetterman as “misplaced hand-wringing” and suggested that it’s more a reflection of a “very, very tough Republican primary and a noncompetitive Democratic primary.”

Unresolved GOP primaries in Arizona and New Hampshire could also reshape the map. Trump-endorsed Blake Masters in Arizona is facing attacks over his past controversial comments dating back to college, including suggesting the U.S. should not have participated in World Wars I and II, and favorably quoting a noted antisemitic libertarian and a Nazi officer.

Masters, a Stanford University alumnus and protégé of libertarian tech magnate Peter Thiel, more recently doubled down on praise of the ideology of the “Unabomber” Ted Kaczynski. With Trump’s backing, Masters emerged as the frontrunner in the primary even as Sen. Mark Kelly (D-Ariz.) continues to haul in millions of dollars.

And in New Hampshire, there’s no standout in the Sept. 13 primary to face Sen. Maggie Hassan (D-N.H.). After Sununu rebuffed national Republican leaders’ efforts to recruit him for a Senate run, lesser-known GOP contenders lined up to compete for the nomination — all while Hassan spends big on TV ads to boost her own image as Biden’s popularity craters.

Add it all up, and Senate Democrats see a relatively bright outlook, all things considered.

“It’s wrong for any party to believe they automatically inherit enthusiasm. You have to create it with quality candidates,” said Senate Majority Whip Dick Durbin (D-Ill.). “History is on [Republicans’] side. But the polls are not.”

As for Walker, several Republicans attributed his recent setbacks to his status as a first-time candidate. Chris Hartline, a spokesperson for the NRSC, said the committee meets with GOP campaigns regularly and declined to further discuss conversations with Walker’s.

Sen. Tommy Tuberville (R-Ala.), a former college football coach, likened Walker’s campaign to his own in 2020 and said he’s stayed in touch with the Georgia Republican, who “doesn’t have to sell his name.” Running against former Sen. Doug Jones two years ago, Tuberville shirked a debate and won by 20 points — though in a heavily Republican state.

“I didn’t get up and debate people because they didn’t get out and work like I worked. And I wasn’t going to give them an advantage … by giving them a platform,” Tuberville said.