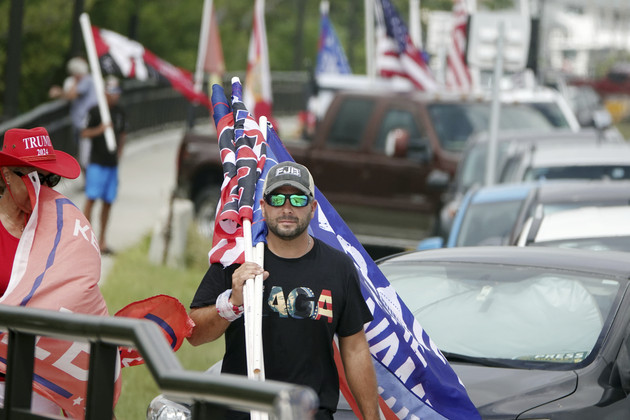 In years past, it would have been a political Waterloo moment for Republicans: President Joe Biden and congressional Democrats racing frantically to finalize sweeping legislation to hike taxes on corporations and spend trillions on climate change and health care subsidies.

But instead of mounting a massive grassroots opposition to tank or tar the Inflation Reduction Act, conservatives and right-wing news outlets spent the past week with their gaze elsewhere: the FBI’s search of Donald Trump’s Palm Beach mansion.

Hundreds of them gathered instead outside Trump’s Mar-a-Lago estate in South Florida to protest what they viewed as an egregious example of federal government overreach. Back in Washington, conservative activists did rally against the bill and targeted vulnerable Democrats in ads. But even the main organizers conceded that they had little time to muster the opposition-party gusto of years past.

“Everything was moving so fast, the tax provisions were being debated on the fly, so there was very little time for groups to do that in-depth grassroots pushback like we saw during Obamacare,” said Cesar Ybarra, vice president of policy at conservative grassroots organization FreedomWorks. “To create buzz in this town and for it to penetrate across America, you need more time. So yeah, we got rolled.”

Far from a singular lapse, last week’s split-screen of the Mar-a-Lago search and the passage of the IRA provided a telling portrait of pistons that move modern Republican politics. Whereas conservative activism has, in past cycles, been driven by opposition to Democratic-authored policies or actions — from Obamacare to TARP— the modern version has been fed by culture-war issues and, more often than not, Trump himself.

“I think anytime you have FBI agents setting a new precedent by raiding a former president’s home, that’s going to get a lot of attention, compounded by Liz Cheney getting annihilated in her primary,” said former Republican House Speaker Newt Gingrich, who set the prior template for policy-centric midterm catapults with the GOP’s famed Contract with America in 1994.

For Democrats, the current paradigm is a boon, politically. The party hailed the passage of the IRA as a major victory they plan to capitalize on moving into the midterms. They argue that uniform Republican opposition to the bill was hypocrisy — Trump once championed several of its provisions. They view the popularity of the IRA and absence of sustained pushback as a guarantee that this won’t be an electoral albatross like Obamacare was for the party in 2010.

“You’re not having town halls with people screaming about Medicare drug negotiations. It’s very hard to object to a bill that invests a lot of money in clean energy,” said Matt Bennett, the executive vice president for public affairs at the Democratic centrist think tank Third Way.

Republicans argue that the bill will prove more beneficial to them in November, specifically the provision to hire and retain more IRS agents. And they quibble with the idea that the right wasn’t outraged or organized, arguing that the bill was pared back precisely as a result of activist pushback. Far from being two separate threads, they see the IRA and the Mar-a-Lago search as intertwined.

“The timing of the bill happening the same week as the former president’s residence was raided, and you had the split screen of, well, if they could do that to him, they could do that to you, and here’s this bill with 87,000 IRS agents being funded,” said Jessica Anderson, the executive director of the conservative Heritage Action for America. “I think we’re going to look back and see that it really lit a match for people with the distrust for government at an all-time high.”

Merissa Hamilton, an activist with FreedomWorks, said the increase in funding for the IRS has already been energizing grassroots efforts. Before the bill was passed, Hamilton organized protests with dozens of activists in front of the Phoenix office of Sen. Mark Kelly (D-Ariz), one of the most vulnerable Senate Democrats.

“We feel even more detached from our representation than we ever have before because there was no time to get any public input,” said Hamilton. “It’s a big deal when you’re doubling the size of a federal agency. It screams something that’s designed to be punitive against people.”

But others in the party conceded that policy fights are no longer driving activism, at least to the degree they once did. In a Twitter thread, Brian Riedl, an economist with the conservative-leaning Manhattan Institute, said the right’s more recent apathy on economic policy “is partially a focus on culture & troll wars, partly a post-Trump identity crisis. And a lot of Democrats simply learning to avoid the economic policy prescriptions that most drive conservative rebellions.”

The money flow may tell an even more compelling story about a grassroots movement more geared toward Trump than congressional Republicans.

In the wake of the FBI’s search of Trump’s home, Trump’s Save America PAC reportedly raked in millions in the following days, according to The Washington Post. Elsewhere, meanwhile, the main Republicans running in marquee Senate races have struggled to build small-dollar donor networks, forcing the National Republican Senatorial Committee to slash ad spending and campaigns and operatives to panic.

Ohio Democratic Senate nominee Tim Ryan has brought in more than $9.1 million compared with GOP challenger J.D. Vance’s $1 million. Just over 9 percent of the money Vance raised for his primary campaign account between April and July came from contributions from individuals, and less than a fifth of that amount was from un-itemized small-dollar donors (those who gave less than $200). Of Ryan’s donations, 46 percent came from small-dollar donors.

In Pennsylvania, GOP nominee Mehmet Oz has largely self-funded his campaign, with less than 30 percent of his total receipts last quarter coming from individual contributors. Of that amount, just 18 percent came from small-dollar donors, compared with more than half for Democratic nominee John Fetterman, who brought in more than twice what Oz did.

Those figures, combined with Trump’s continued fundraising success, suggest that much of the conservative grassroots energy remains behind the former president, and not the other members of his party. The passage of Biden’s signature bill hasn’t changed that dynamic, even as Republicans have vowed to campaign against the IRA as they head into the November midterm election.

“It’s one of those bills that is going to get more and more unpopular the more that people learn about it,” predicted Rep. Jim Banks, chair of the Republican Study Committee, who led efforts to educate GOP House members on the IRA before it was passed. “The more the voters learn about it before election day, the more severe the consequences will be.”

Olivia Beavers and Sam Stein contributed to this report.