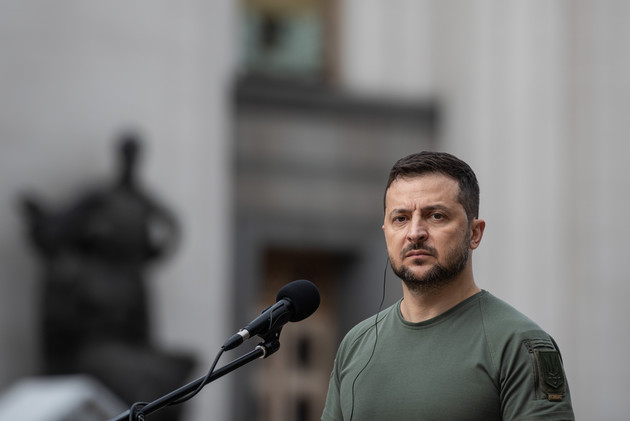 On Wednesday, Zelenskyy said his military leaders had assured him Russia was the source of the missile. | Alexey Furman/Getty Images

Ukrainian President Volodymyr Zelenskyy’s insistence that Russia was behind a deadly missile strike in Poland — despite American intelligence indicating the missile was Ukrainian — has U.S. officials pushing to more closely coordinate messaging with allies, including Kyiv, on the explosion.

Over the last two days, top U.S. officials have reached out to European leaders and officials in Zelenskyy’s office, urging caution when speaking about what led to the explosion, according to two Western officials and a U.S. official. In a series of urgent phone calls, American officials requested that NATO allies refrain from issuing definitive statements until the completion of the investigation in Poland, one of the Western officials said.

The outreach came after a series of mixed messages about the owner of the missile and who bore responsibility for the strike. Following the explosion Tuesday, Zelenskyy said in a speech that Russia fired the missile that killed two people in Poland. The next day, NATO Secretary General Jens Stoltenberg said the missile was likely Ukrainian.

The varying statements illustrate one of the first major divergences in opinion between Washington and Kyiv — an alliance that, for the most part, has acted in a swift, coordinated fashion for nearly nine months to help Ukraine beat back Russian advances. U.S. officials are downplaying the differences, but the possibility that the war will continue through the winter means more such fractures could emerge — and Moscow could exploit them.

The confusion spawned by the missile blast was a “really important test run” for the United States, its NATO allies and Ukraine, said Heather Conley, a former State Department official with expertise in Europe.

“I think we all learned a pretty valuable lesson in [that] you cannot say something right off the bat until you understand what it is … because the stakes are so high right now,” said Conley, now president of the German Marshall Fund of the United States. Overall, Conley said, most countries involved did well, but “you can tell we still have work to do.”

The missile hit southeastern Poland on Tuesday just as Russia had ramped up its missile attacks on Ukraine. The incident raised global alarms given that Poland is in NATO and a Russian attack on its soil could have prompted a response by the military alliance.

Zelenskyy and some of his aides quickly blamed the Kremlin. But over the next 24 hours, U.S., NATO and Polish leaders said evidence suggested the strike in Poland likely originated from a Ukrainian air defense missile trying to thwart a Russian strike.

On Wednesday, Zelenskyy said his military leaders had assured him Russia was the source of the missile. “I have no doubt that it was not our missile or not our missile strike,” he said. President Joe Biden, upon returning early Thursday morning from a trip to Asia for the G-20 summit, disputed Zelenskyy’s comments, saying “that’s not the evidence.”

Zelenskyy’s statement prompted top U.S. officials to reach out to NATO allies on Wednesday, saying that the U.S. believed the missile appeared to be from Ukraine and Russian-made, according to two Western officials familiar with the conversations. They, like others quoted, requested anonymity to speak more freely about sensitive national security matters.

U.S. intelligence supports the claim that a Ukrainian missile, a long-range surface-to-air missile fired from the S-300 missile defense system, appears to have caused the explosion in Poland, the two people said.

U.S. intelligence agencies have not commented. But the U.S. has publicly said that it believes the missile is likely from Ukraine. A spokesperson for the National Security Council, reiterating an earlier statement, said the administration has not seen anything that contradicts Poland’s assessment that the explosion was most likely the result of a Ukrainian air defense missile.

CIA Director William Burns met with Polish President Andrzej Duda on Wednesday and discussed the explosion in Poland, a U.S. official said, without providing details or the location of the meeting. The official added that Burns told Duda the U.S. was committed to continuing to provide support to Ukraine. The meeting had been scheduled before the missile strike, the official said.

As of Wednesday evening, Ukrainian officials, including those in Zelenskyy’s office, were unconvinced and expressed to some of their European counterparts that they wanted to see concrete evidence that the missile was Ukrainian.

“He is going to need a lot of convincing,” one of the Western officials said of Zelenskyy. “He still has not seen the evidence.”

By Thursday, Zelenskyy had somewhat adjusted his position, telling the Bloomberg New Economy Forum in Singapore: “I don’t know 100 percent – I think the world also doesn’t 100 percent know what happened.” He said his military aides had told him, based on visuals of the blast site, that it could not have been caused solely by a Ukrainian anti-missile projectile.

Some Western leaders have sought to use the moment to argue that the ultimate blame still falls on Russia, which launched its full-scale invasion of Ukraine in February. Had Moscow not gone ahead with its unprovoked war, Ukraine wouldn’t be using a missile defense system to begin with, U.S., NATO and other officials have said.

“Russia launched another barrage of missiles against Ukraine specifically intended to target Ukraine’s civilian infrastructure,” Defense Secretary Lloyd Austin said Wednesday. “This tragic and troubling incident is yet another reminder of the recklessness of Russia’s war of choice.”

Sen. Jeanne Shaheen (D-N.H.), who leads the Senate Foreign Relations Committee’s Europe panel, said Russia was still at fault regardless of who owned the missile. “This would not have happened without Russia’s unprovoked, atrocious war in Ukraine. Regardless of whose missile it was, Russia is ultimately at fault,” she said.

For its part, the Kremlin has taken umbrage at initially being blamed for the Poland blast. “We see this mayhem as a deliberate effort made as part of a systematic anti-Russia campaign conducted by the West around Ukraine,” the Russian Foreign Ministry said in a statement.

Secretary of State Antony Blinken on Thursday did not directly answer a reporter who asked him about Zelenskyy’s reliability. But he said he and other administration officials are in touch with Ukrainian counterparts and that everyone is waiting for Poland to finish its probe.

“We also have among all of us — Ukraine, Poland, the United States, our NATO allies, G7 partners — a commitment to follow the facts,” Blinken said.

The war is now entering what’s expected to be a brutal winter, and some military leaders predict that while the fighting will continue to be heavy, neither side will make significant gains given the weather conditions. The momentum appears to be with Ukraine, which has pushed Russia out of large tracts of its territory, including most recently the Kherson area. But Kyiv will need to continue to be resupplied with arms and humanitarian aid to maintain any edge it has gained.

The diplomatic wrangling over the missile strike is only the latest sign of tension over messaging about the war.

Gen. Mark Milley, the chair of the Joint Chiefs of Staff, on Wednesday reiterated his call for Ukraine to use its current battlefield leverage to pursue peace negotiations with Russia. Biden and national security adviser Jake Sullivan have said repeatedly it is up to Ukraine to decide when it wants to negotiate.

Milley argues that Kyiv cannot ultimately push Russia completely out of its territory, despite Zelenskyy’s stated goals and that it’s best to negotiate at a moment of strength.

It’s an argument with some merit, former U.S. officials and analysts say, especially when considering Russia’s strong grip on the Crimea region and its undiminished capacity to churn out massive amounts of munitions to throw into the fight. Still, many of those same people note, U.S. officials have on more than occasion underestimated the Ukrainian military’s abilities, while overestimating that of the Russians.

But Zelenskyy is under tremendous pressure from his own people not to concede an inch of soil to Moscow, especially after evidence has emerged of Russian atrocities against Ukrainian civilians. And, for now at least, Russian leader Vladimir Putin appears unwilling to engage in negotiations.

Throughout the conflict, the United States has maintained diplomatic contacts with Russian officials at virtually all levels, including through its embassy in Moscow and Sullivan. The U.S.-Russian discussions touch on multiple topics, including Americans detained in Russia and the Kremlin’s occasional nuclear threats.

Those diplomatic connections could prove critical over time if and when the Ukrainians and Russians decide they are ready to negotiate. But there’s no current U.S.-Russian backchannel focused on such negotiations, an administration official familiar with the issue said.

Biden himself has repeatedly said it’s up to Kyiv to decide when any peace talks should go forward. “We are not going to engage in any negotiation. There’s no — nothing about Ukraine without Ukraine,” the president said while in Bali, Indonesia, this week. “This is a decision Ukraine has to make.”

One diplomat from a NATO ally pointed to the roughly 100 Russian missiles fired at Ukrainian civilian targets on Tuesday — while Burns was in Kyiv — as proof that the Kremlin isn’t interested in talking peace. In recent comments, Sullivan pointed to Russia’s claims that it had annexed some Ukrainian territory as additional evidence of a lack of seriousness about peace on the Kremlin’s part.

“There’s a lot of signaling about peace talks,” Estonian Permanent Secretary of the Ministry of Defense Kusti Salm told reporters in a virtual roundtable Thursday. At the moment, such signaling is “an avenue with no positive outcome … from the Ukrainian perspective, especially if the interim or some other form of peace settlement would mean territorial concessions, it would lead the country into severe difficulties.”

Lara Seligman and Alexander Ward contributed to this report.