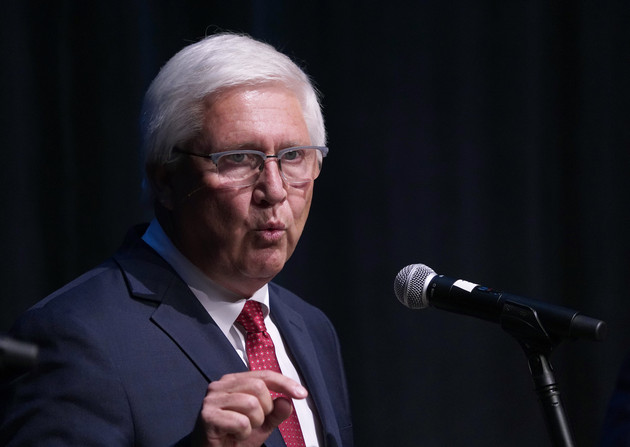 The final piece of the 2022 Senate puzzle is about to be set.

Democratic Sen. Maggie Hassan’s reelection campaign could be one of November’s most competitive races — but that depends on who wins Tuesday’s Republican primary in New Hampshire, the last nominating contest left in the battle to swing the 50-50 Senate.

The GOP’s establishment wing has lined up behind state Senate President Chuck Morse, who is mounting a late charge for the nomination against longtime polling leader Don Bolduc. But a leading Democratic super PAC has been attacking Morse on the airwaves, the latest example of the party’s involvement in GOP primaries.

New Hampshire Republicans are also picking two candidates to challenge each of the state’s vulnerable Democratic House incumbents. And just down I-95, Democrats in Rhode Island will decide whether to keep their appointed governor, Dan McKee, who took over in Providence after Gina Raimondo resigned to become President Joe Biden’s commerce secretary.

Not counting Louisiana, which runs its “jungle primaries” on November’s Election Day, Tuesday marks the final primaries of 2022. Here’s what to watch for:

The stakes: The GOP primary for Senate in New Hampshire had been sleepy — until the calendar turned to September.

White Mountain PAC won’t have to reveal the source of its funding until next month. But elevating the more mainstream Morse over Bolduc, who has ties to right-wing figures in the GOP, is a priority for Republicans seeking to defeat Hassan. The incumbent is one of four Senate Democrats up for reelection this year in states Biden carried by fewer than 10 percentage points in 2020. Morse also picked up an election-eve endorsement from the state’s popular Republican governor, Chris Sununu.

But like in other states, Democrats were not content to let the Republican primary play out on its own. Two days after White Mountain PAC hit the airwaves, Senate Majority PAC, Democrats’ top Senate super PAC, launched a $3.2 million buy.

The Democratic ad is a negative spot hitting Morse, and it’s a two-fer. The spot doesn’t explicitly promote the more extreme Bolduc, as the party has done — controversially — in other races. But the negative hits on Morse are ones that could hurt him in a general election as well as among more Donald Trump-aligned voters in the primary: “Mitch McConnell’s Washington establishment is going all-in for Chuck Morse,” a narrator says in the ad.

One town to watch: Laconia. In Bolduc’s 2020 GOP primary defeat to Corky Messner — who ran an uninspired campaign against Democratic Sen. Jeanne Shaheen, Bolduc got just a tick under 70 percent of the vote in his hometown.

Morse will likely clean up in the Merrimack Valley, home to his state Senate district.

The stakes: Nothing brings out ambitious politicians like a primary in an early presidential nominating state.

And that’s why the race for the GOP nomination in New Hampshire’s 1st District has seen so much involvement from national figures.

Trump himself has taken a pass on the race, as he has in most contested congressional primaries — seeing little need to alienate segments of the party or, perish the thought, suffer an embarrassing defeat.

Pappas is vulnerable: He holds a district Biden carried by 6 points, and New Hampshire is notoriously swingy.

National Republicans have put their thumb on the scale for Mowers: Congressional Leadership Fund, the top House GOP super PAC, which has ties to Minority Leader Kevin McCarthy, has run positive spots touting the repeat challenger, while the moderate Republican Main Street Partnership’s political arm has attacked Leavitt as a “woke Gen-Zer” who “records everything” on social media.

One town to watch: Manchester. The district’s largest city accounted for more than 1-in-10 of the total ballots cast in the 2020 primary, which Mowers won.

Second (District) to none

The stakes: The GOP contest for New Hampshire’s 2nd District could determine whether Democratic Rep. Annie Kuster cruises to reelection or has to wage what could be her hardest race yet.

Two very different candidates are vying for a chance to take her on. The frontrunner is Bob Burns, a longtime GOP activist who strongly opposes abortion rights, advocates for “national reciprocity for conceal carry permits’’ and has tied himself closely to Trump. Keene Mayor George Hansel, Burns’ top competitor, strikes a far different profile. He supports abortion rights, is an advocate for fighting climate change and frequently picks up crossover voters as the leader of a Democratic-leaning city.

House Democrats are so eager to face Burns that a Democratic super PAC is airing some $600,000 in TV ads to tout his conservative credentials to GOP voters. Hansel, meanwhile, is the beneficiary of spending from a newly created GOP PAC that has boosted more moderate candidates in primaries in New York and Florida. That group, American Liberty Action PAC, doesn’t have to reveal its donors until next week.

This district is a bit of a reach for Republicans — Trump lost it by 9 points in 2020 — but many GOP operatives believe that Kuster is a more vulnerable incumbent that Pappas. If Hansel can eke out a win over Burns, expect both of the state’s congressional seats to host highly competitive matchups.

The stakes: Raimondo’s departure last year to join the Biden administration gave McKee the veneer of incumbency, but it didn’t come close to clearing the field.

Secretary of State Nellie Gorbea and businesswoman Helena Foulkes are locked in a tight, three-way race with McKee that has split Democrats in Rhode Island and across the country. Nancy Pelosi was in Providence on Sunday to campaign for Foulkes, the daughter of the House speaker’s longtime friend, Martha Dodd Buonanno.

If McKee falls, he’ll be the first (and almost certainly the only) incumbent governor to lose renomination this year. Of the 28 incumbents seeking reelection, 26 have won their primaries, with McKee and New Hampshire Gov. Chris Sununu up on Tuesday.

But if McKee wins, it will mark the first midterm since 2010 that all the gubernatorial incumbents who sought renomination prevailed. In each of 2014 and 2018, one governor was ousted in the primary.

No matter which candidate wins the primary, Democrats are projected to hold onto the governorship. POLITICO’s Election Forecast rates the race as “Likely Democratic.”

One city to watch: Providence. The state capital accounts for roughly 20 percent of the Democratic primary vote. None of the three candidates can claim a natural base there: McKee is the former mayor of Cumberland, while Gorbea is from North Kingstown and Foulkes lives in Narragansett.

The stakes: Rhode Island got lucky last year. Long predicted to lose one of its two House seats in the decennial reapportionment, the state surprisingly kept both, and Democratic Rep. Jim Langevin’s decision to retire means there’s an open seat up for grabs this fall.

The Democratic primary favorite is state Treasurer Seth Magaziner, whom Langevin has endorsed to succeed him. But also running is Sarah Morgenthau, who is seeking to become the state’s first female Democratic member of Congress.

The Democratic nominee will face Republican Allan Fung, who is unopposed in the GOP primary. Fung, the former Cranston mayor who lost two gubernatorial races to Raimondo, is hoping a step down to a House seat will bring better luck.

Republicans have touted Fung as a strong recruit — including a visit from McCarthy, the House GOP leader, on the campaign trail — but the race has notably not shown up as a top target for GOP outside group advertising. That suggests that Fung will be a decided underdog unless the political environment improves for Republicans before Election Day.

A town to watch: Cranston. Rhode Island’s second-largest city is Fung’s home base, but it votes reliably Democratic at the federal level.