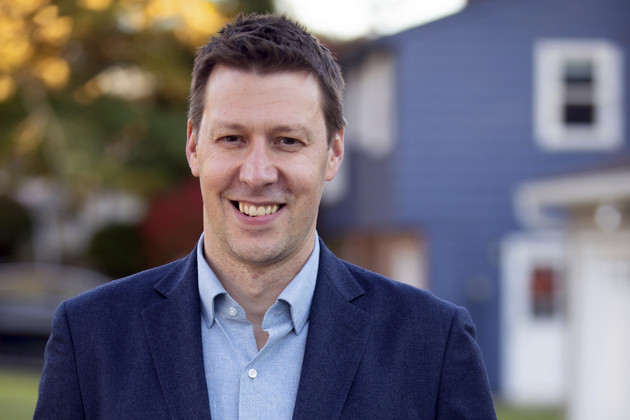 Josh Riley is the Democrat candidate for U.S. Congress in New York's 19th District on Nov. 8, 2022, in one of the most competitive House races in the nation. | josh Riley for Congress/AP Photo

ALBANY, N.Y. — The road for control of the House might just run along the Hudson River.

Instead of serving up new Democratic lawmakers for Speaker Nancy Pelosi, a mix of open seats and new ones drawn up in New York’s messy redistricting process have turned a deep blue state into a battleground as Democrats are desperate to defend their thin margins in Washington.

At least a half dozen congressional races stretching from Long Island to Ithaca will be instrumental in deciding whether Republicans are positioned to drown the remainder of President Joe Biden’s first term in subpoenas, hearings and bad press going into 2024.

By many predictions, New York has as many contested seats as any state in the nation, and POLITICO’s Election Forecast puts two as toss-ups; three as leaning Democratic and one leaning Republican. That makes New York — which hasn’t elected a Republican statewide in 20 years — one of the most unlikely stages of political theater this election cycle.

“I’ll only tell you this — we’re going to be competitive in every race that we’ve got an opportunity to win. We understand we’re going to have to work hard, and we’re prepared to do that,” state Democratic Committee chairman Jay Jacobs said.

The National Republican Campaign Committee is savoring the moment, saying they see New York ripe for pickups in November.

“Democrats are on defense in more seats than they ever would have liked because every single one of their extreme liberal candidates backs a pro-criminal, reckless spending agenda that’s hurting every New Yorker,” NRCC spokesperson Samantha Bullock said.

Democrats have been criticized for partially putting themselves in the unenviable position of having to defend seats that they hoped would be safe. An overzealous attempt to draw district lines could have yielded Democrats as many as 22 of the state’s 26 districts. Democrats now hold 19 of 27 House seats in New York; the state is losing a seat next year due to population stagnation.

In April, the state’s top court struck down Democrats’ map for being too gerrymandered, leaving it to a Republican judge in a small upstate town to draw new maps that put more seats in play than anyone envisioned.

Still, Democrats have renewed optimism about picking up seats after Pat Ryan’s special election win last month in the Hudson Valley signaled their fortunes might not be as bad as they’d thought as he ran heavily on a pro-abortion-rights platform that resonated with voters in the swing district.

“We’re going to be very clear about the choice that voters have this year, and that’s between a party that denies the validity of that last election — in many cases support of the Jan. 6 insurrection — and doing everything it can in turning back the clock, like reveling in the overturning of Roe. v Wade,” Jacobs said.

Republicans, meanwhile, say a “red wave” is an inevitable consequence of a midterm election when the opposing party is in control at both state and federal levels — the only question is how large it will be.

“The message is one of optimism from the NYGOP perspective,” said state party chairman Nick Langworthy, who himself is running for Congress in November after winning a Western New York primary last month. “We have an embarrassment of riches of a lot of great candidates and a lot of great races.”

Big money is flowing to endangered incumbents, and all predictions are tempered by the lack of precedent in the brand-new court-drawn districts.

“Put that all in a blender and you have chaos,” said longtime New York Democratic strategist Hank Sheinkopf, who has not aligned with any campaign this cycle but has worked in gubernatorial and House races for decades.

The extent of their excitement in a non-presidential year is unclear, especially as issues like gun laws and abortion rights driving increased engagement elsewhere are making less difference in New York, where Democrats have largely locked them into state law.

The Democratic Congressional Campaign Committee — with New York’s Rep. Sean Patrick Maloney at the helm — is focusing on claiming six districts in Central New York, the Hudson Valley, Staten Island and Long Island with a renewed emphasis on reproductive rights that played well in Ryan’s special election win and as he runs for a full term Nov. 8.

Strategists acknowledge that of the six, Democrats are least likely to find success against the two GOP incumbents — Staten Island’s Rep. Nicole Malliotakis and Long Island’s Rep. Andrew Garbarino — but they’re focusing on tying all of their opponents to former President Donald Trump and his supporters from the party’s more extremist wings.

Republicans might not need to flip any New York districts that Biden carried in 2020 to reclaim the majority; in all, Republicans need to net only five seats to win the gavel. The party in New York has strong contenders to hold onto open GOP seats that include those being vacated by Long Island Rep. Lee Zeldin, who is running for governor, and Central New York’s Rep. John Katko, who announced in January he would not run for reelection.

“If you think where this year started and oddly how it’s going to end: The Democrats had ever intention of taking us down to four seats, and here we are possibly fighting for 11 or 12,” Langworthy said.

Here’s a look at the key New York House races:

On the eastern end of Long Island, the race to succeed Zeldin is a complete toss-up on paper: Biden and Trump split the vote almost evenly. The race this year is also a bit of an oddity for a Long Island contest by historical standards — it completely dodges any of the state Senate districts that are likely to be battlegrounds within it.

Zeldin, now the Republican gubernatorial nominee, will presumably help his party win at least some support at the top of the ballot in November.

LaLota is the chief of staff of the presiding officer of the Suffolk County Legislature and has served various roles in county government throughout the years. He won a three-way primary broadly based on the strength of each candidate’s ties to Trump.

He faces Fleming, a Suffolk County legislator, former prosecutor and Southampton Town councilwoman, who ran unopposed in the primary.

The contest to succeed outgoing Democrat Rep. Tom Suozzi in a district that Democrats have held for decades and Joe Biden won by 10 points isn’t usually ranked at the top of lists of New York’s most competitive districts.

But the local election results in 2021 were as bad for Democrats as anywhere in the country. Republicans won every single office on the ballot in North Hempstead, which makes up a third of the congressional seat’s population and had previously been controlled by Democrats since the 1980s.

The seat being vacated by Democratic Rep. Kathleen Rice began to emerge as competitive to some local observers in just the past few months, thanks to Long Island’s tempestuous political climate that is especially sensitive to local politics.

The November matchup pits former Hempstead supervisor Gillen, who became the first Democrat elected to the position in more than a century, against Hempstead Town Board member D’Esposito, a volunteer firefighter and retired New York City police detective.

Gillen lost her supervisor reelection bid to a Republican in 2019, showing just how swiftly Hempstead’s political winds can shift. She beat three other Democrats in the August primary. D’Esposito ran unopposed in the primary and has had the party’s support since March.

The redesign has been widely assumed to leave Malliotakis as the frontrunner as the two face off in a rematch. But the tiny shift towards the Democratic column in the final maps means there’s a path for a Rose victory, particularly if some of the Staten Islanders who were Trump fans don’t participate in a midterm election.

Maloney, the five-term House member, soundly defeated his liberal primary challenger, Alessandra Biaggi, in the Aug. 23 primary, with hearty fundraising and widespread support from establishment Democrats across the nation.

But he faces another challenge in his new Hudson Valley district against his GOP opponent, state Assemblyman Lawler, who is painting Maloney as a wealthy member of the Washington establishment and has tied him and his congressional colleagues to high inflation, crime and tax rates.

Some polling has suggested the two are neck-and-neck in the Hudson Valley district, and the GOP’s Congressional Leadership Fund recently dropped $1 million on TV ads for Lawler.

Eleven weeks after winning a special election to serve in Congress for the remainder of the year, Ryan will be back on the ballot in a seat that’s a bit more Democratic-friendly.

The new district chops pieces of nine mostly rural counties from the one that was the site of the last month’s election and adds Orange County and Poughkeepsie. That turns it from a seat that Biden won by about 1 percentage point to one that he won by more than 8 points.

Ryan’s victory also means he’ll have the advantages of incumbency for the homestretch of his new election, as well as a massive amount of national exposure that would help his fundraising.

Schmitt, a sophomore member of the state Assembly, outperformed Trump by 6 points in his district in 2020.

Molinaro would’ve been the undisputed frontrunner in this race if it happened a couple of weeks ago. In a district that’s a toss-up on paper, he had far more experience campaigning and better name recognition than any of his potential opponents. But his loss to Ryan means he won’t enter the race with the advantages of incumbency and the fact that he lost the summer’s highest-profile election will likely scare off at least some potential donors.

The district is changed a bit from the one he ran in a couple of weeks ago — it notably sheds a piece of Molinaro’s home county of Dutchess, where he is county executive — but it’s not dramatically different politically.

It loses most of the Democratic stronghold of Ulster County, but replaces it with the Democratic stronghold of Tompkins County, which includes the college town of Ithaca. Rural counties like Schoharie are no longer in the district, but they are replaced by rural counties that include Tioga along the Pennsylvania border. All those changes turned it from a seat where Biden received 51 percent of the vote to one where he received 52 percent.

Riley, an Ithaca attorney, handily won the Democratic primary to run against Molinaro.

The new 22nd District that includes much of Syracuse emerged as perhaps the most competitive in the state when the safe Democrats’ seat was redrawn after New York’s maps were declared improperly gerrymandered. Now the seat is one that Biden won by just 8 points, an even tighter margin than the seat outgoing Rep. Katko held.

But Katko regularly won crossover votes as the most moderate member of an increasingly polarized Congress, and both parties say that will work to their advantage.

Software company founder Williams upset the GOP primary with a victory over the former prosecutor Steven Wells, who had the GOP party backing and financial advantage. Williams will face Conole, a commander in the Navy Reserves.