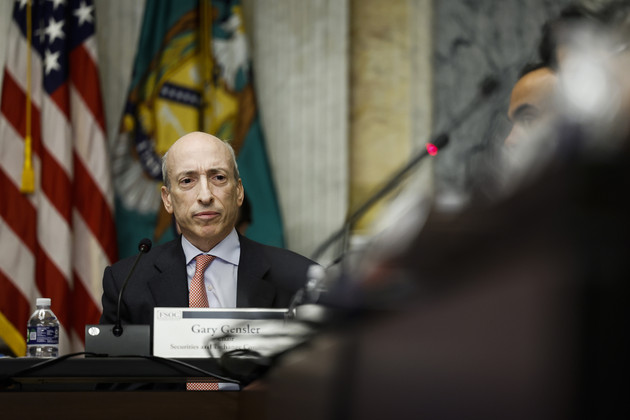 While Gary Gensler has acknowledged the ease with which individuals can enter the market today, the SEC chair has argued the system can work better for investors. | Anna Moneymaker/Getty Images

Wall Street’s top regulator is pursuing the biggest overhaul of the $51 trillion U.S. stock market in two decades. First he’ll have to fend off a major industry resistance campaign.

Securities and Exchange Commission Chair Gary Gensler — a former Goldman Sachs partner turned progressive icon — is set to launch a regulatory broadside in the coming weeks against brokerage and trading giants including Charles Schwab, Robinhood and GOP megadonor Ken Griffin’s Citadel Securities, according to interviews with more than a dozen executives, lawmakers, regulators and investor advocates.

The rules that Gensler is spearheading would revamp the stock market’s plumbing, partly in response to the 2021 meme stock saga in which Robinhood and other brokerages attracted scrutiny after they were overwhelmed by trading in shares of companies such as GameStop and AMC. Gensler, who has held leading regulatory roles in the Biden and Obama administrations, has questioned whether investors are operating in an environment that is “as fair and competitive as possible.” He is expected to crack down on the complex web of payments and fees that exchanges, brokerages and trading firms share when processing investors’ stock trades.

While the proposals have yet to be released, industry executives have already begun talking about suing the SEC over the plans. And a growing number of Hill Democrats are urging Gensler to proceed with caution, signaling a potentially treacherous political road ahead even among members of his own party — one that will become even more fraught if Republican critics gain a majority in Congress.

“We have to be careful not to throw the baby out with the bathwater,” Rep. Ritchie Torres, a New York Democrat on the House Financial Services Committee, said in an interview.

Gensler’s bid to revamp the structure of the stock market is shaping up to be one of the most contentious pieces of an already ambitious agenda that has also sought to impose landmark climate disclosure rules on public companies and tame the largely unregulated crypto marketplace. Billions of dollars are on the line at some of Wall Street’s most powerful firms. SEC officials have talked about rewriting the trading rules for years without making major changes.

“The expectation is that this is going to be significant,” said Brett Redfearn, who led the SEC’s Trading and Markets Division during the Trump administration. “Gensler likes to go big. I suspect he is looking to make his mark here on our equity markets.”

At issue for Gensler is ultimately a series of long-held concerns from investor advocates and progressives that the current market is not built for everyday people and institutional investors such as pension funds — but rather for Wall Street intermediaries.

The SEC chief has talked about half a dozen possible reforms. Among them are changes to the way stock trades are priced on exchanges like NYSE and Nasdaq, which Gensler has said are not on a level playing field with other trading venues that operate with more regulatory flexibility and less transparency. Only about half of all trading in the market today occurs on stock exchanges, with the rest taking place through banks and brokerages running private markets and handling the trades themselves. Gensler has also discussed more disclosures around how brokers execute clients’ orders, changes to what constitutes the best price in the market and ways to move more trading to public exchanges.

“We haven’t updated key aspects of our national market system rules, particularly related to order handling and execution, since 2005,” Gensler said in recent testimony to the Senate Banking Committee. “Think about that. When you reach into your pocket, you likely will find a phone that did not exist 17 years ago. How would you fare in your work and life if you still were using the latest technology from 2005?”

The question is whether the Gensler-led SEC will be able to enact the proposals in the face of widespread backlash.

Some of the firms that have the most to lose — the wholesalers and brokerages responsible for how and where individual investors’ trades occur — have already started to lay the groundwork for lawsuits, including by amassing data to refute the SEC’s economic case for the changes.

“Everyone would sue,” Virtu Financial CEO Doug Cifu, whose firm is a leading intermediary that executes retail stock trades, said in an interview. “It would be like a conga line to the D.C. court.”

It’s nothing new for Gensler, who as chair of the Obama-era Commodity Futures Trading Commission attracted legal challenges as he led work on rules to rein in derivatives trading that destabilized companies like AIG. Gensler declined to comment for this story.

Gensler’s willingness to challenge powerful financial firms during the Obama administration made him a darling of the left, who succeeded in pushing President Joe Biden to bring him back into government service.

While Gensler implemented post-crisis financial regulations directed by Congress in the Obama years, lawmakers have not passed legislation requiring him to overhaul stock market rules. Executives say Gensler is acting as an opportunist by seizing on last year’s meme stock drama. The episode drew attention to how trading giants such as Citadel Securities and Virtu have come to handle an estimated 70 percent of retail stock orders — earning a cut from each transaction — thanks in part to arrangements where they pay stock brokerages including Schwab and Robinhood hundreds of millions of dollars per year to execute their customers’ orders.

Robinhood Chief Legal Officer Dan Gallagher, a former Republican SEC commissioner, warned that the agency is pursuing an unnecessary overhaul to a system that works well for investors who can buy and sell stocks without delays or commission fees. Gallagher said in an interview the SEC is currently in search of a “theoretical nail” to hammer down. Robinhood drew ire from policymakers in February 2021 after it paused a deluge of trading in GameStop and other meme stocks as it tried to meet $3 billion in financial obligations owed to a stock clearinghouse.

“If there was no GameStop, no AMC, no Robinhood almost going out of business, none of this happens,” Cifu said. “It’s just market structure political theater.”

While Gensler has acknowledged the ease with which individuals can enter the market today, the SEC chair has argued the system can work better for investors.

The brewing fight is beginning to attract words of warning from a bipartisan group of lawmakers, including Democrats who represent districts around major financial centers.

“You don’t want to do a massive restructuring of how things work without some feeling of how it’s going to work,” said Rep. Bill Foster (D-Ill.), a House Financial Services Committee member who is urging the SEC to first use a pilot program before introducing changes to the broader market.

Torres, who represents the Bronx, said the SEC should tread lightly. He said Gensler’s SEC has already moved to shorten the amount of time it takes to settle a stock trade, one policy prescription raised in response to the trading halts at Robinhood and others. He said payment for order flow arrangements between brokerages and trading firms have helped reduce consumer fees and enabled more individuals to enter the market.

“Legislating or regulating in reaction to a singular event has unintended consequences,” Torres said.

Adding to the list of complications is that the House may flip to Republican control in the midterms, giving GOP lawmakers the ability to investigate and try to impede Gensler’s proposals.

A spokesperson for House Financial Services Committee Republicans, Laura Peavey, said GOP lawmakers are prepared to look at the changes along with the rest of Gensler’s agenda at the SEC. She said the agency had so far failed to produce “meaningful cost-benefit analysis.”

“The conflicts of interest that have evolved have already become very ingrained and central to intermediaries’ business models,” said Tyler Gellasch, a former SEC official who now runs the Healthy Markets Association, an investor advocacy group that has been calling for many of the changes Gensler is expected to propose. “The question will really be how far is this commission going to go to protect investors?”