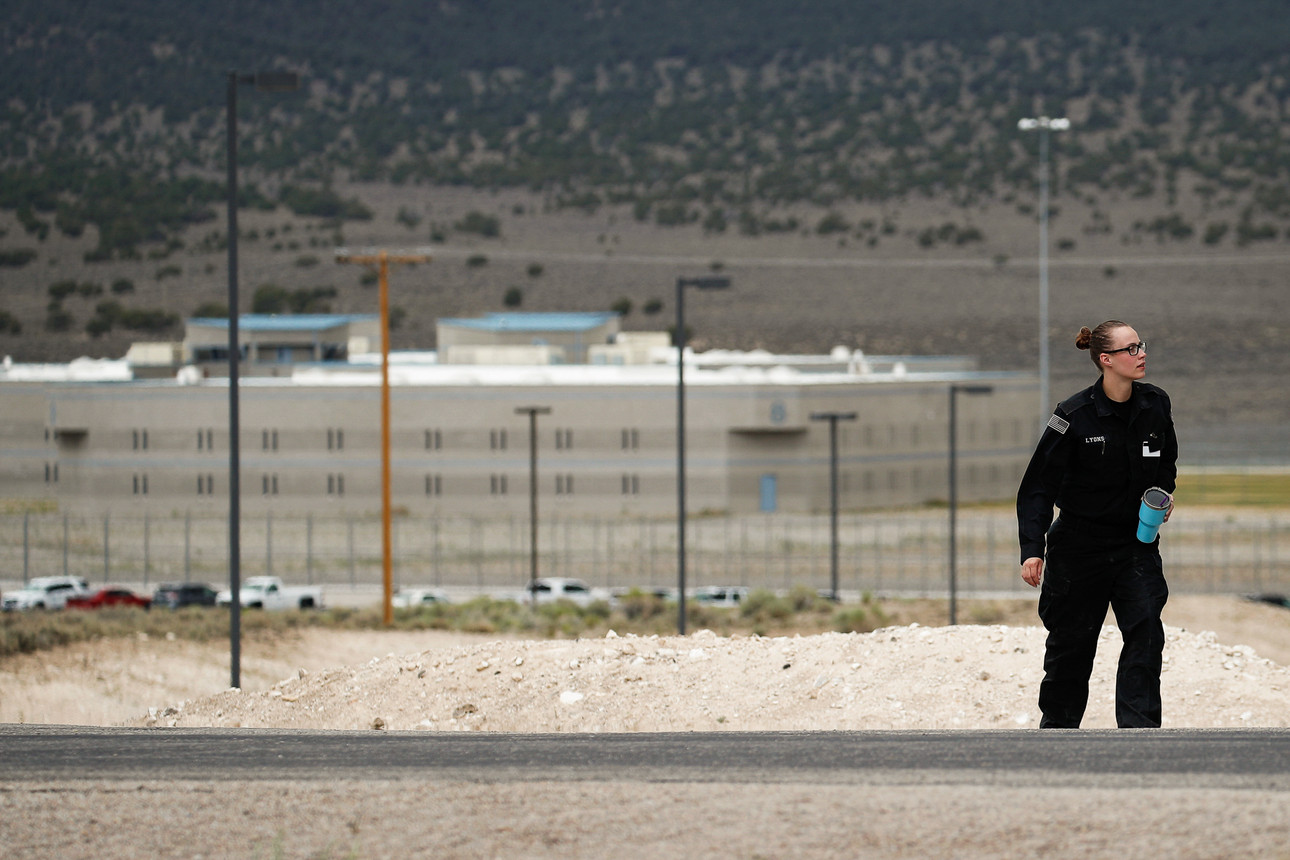 A corrections officer stands near the entrance to Ely State Prison on July 11, 2018, near Ely, Nev. | John Locher/AP Photo

Corrections officers have become so difficult to hire and retain that robots may end up doing the job.

Employers are scrambling to find teachers and health care professionals but nearly all 50 states have long struggled to bring in enough security guards to oversee the nation’s prison population of 1.2 million people. And in recent months the vacancy rates have skyrocketed as officers — frustrated by low pay, violent conditions, long hours, isolated work locations and routine exposure to Covid-19 — quit in droves.

It’s a difficult situation that’s been brewing steadily for decades, as a tough-on-crime attitude among politicians and the public led to longer sentences, dramatically growing prison populations. Then states were slow to invest in maintaining staff, the quality of facilities or programming that reduces recidivism.

Factors like that are driving Nevada toward a novel approach: deploying drones to patrol the state’s prisons and fitting the people serving time with surveillance bracelets.

Despite special bonuses and other incentives approved by local lawmakers and governors from Minnesota and South Dakota to Pennsylvania and Tennessee, some prisons are seeing at least a quarter of their correctional jobs sit unfilled.

“I did 40 years in law enforcement but I couldn’t have done 40 minutes in a correctional facility,” said Nevada Assemblymember P.K. O’Neill, a Republican who is open to the drone proposal. “It’s a very, very difficult job to do.”

Conditions have grown so dire that governors in Florida and West Virginia have declared states of emergency in recent weeks and called in the National Guard to help staff prisons. Some states have resorted to closing prisons, like in Florida, where three of its main facilities shut down indefinitely last year.

Corrections officer isn’t the only job that’s difficult to fill in prisons. There’s a major shortage of medical staff and social workers, which limits what services and programming is available to the people serving out their sentences. In Nevada, extreme staffing shortages and pandemic restrictions left inmates without adequate access to food, cleaning supplies or proper hygiene.

Those are the kinds of fears that have led leaders at the Nevada Department of Corrections to move ahead with a plan to outsource many duties performed by correctional officers to surveillance technology. While this push doesn’t affect federal facilities, it underscores the desperate situation prison officials across the country face as vacancy rates reach record highs.

“It’s just a really bad time to be a corrections professional in this country,” said Jeremy Tripp, policy director at One Voice United, a nonprofit supporting officers. “When you go to a job where you could possibly not come out alive, and you have states where you could make more money working at Lowe’s than at a prison, how could you possibly compete?”

In Nevada, prison officials imagine a security system with a central command center where one person can monitor live video feeds and the decibel levels inside housing units and outdoor areas at facilities throughout the state. This all-seeing staff member can then dispatch what precious few officers are available to an emergency situation. In the event of an escape, drones could be utilized, along with tracking bracelets.

The platform — called “Overwatch” — would allow prisons to “fill in the blanks where we don’t have enough staff,” Nevada Department of Corrections Director Charles Daniels told state lawmakers when briefing them on the proposal this summer. It’s a surveillance plan being pursued in Nevada after prison officials traveled to a police department in Arizona that’s utilizing the same approach on a smaller scale.

Department of Corrections officials indicated they were already moving forward with purchasing some equipment at a briefing on the proposal this summer. But those officials could not provide any cost estimates. The department did not respond to multiple requests for comment.

That lack of information concerns lawmakers, who will eventually need to sign off on any budget increases requested by Daniels’ agency. “You’re building a house without knowing what the house is going to look like yet,” O’Neill said.

Still, prison leaders stressed that the current staffing situation is untenable and a new approach is needed.

Nevada appears to be the first state that would implement such expansive technology inside its prisons.

“It makes sense to look at ways in which technology innovations could help address this,” said Marc Levin, chief policy counsel at the Council on Criminal Justice, a nonpartisan Washington, D.C.-based think tank. “But I don’t think it’s a panacea.”

For Jodi Hocking, founder of Nevada criminal justice nonprofit Return Strong, there’s only one solution to the labor problem: Let people out of prison.

From 1983 to 2015, the prison custody population in Nevada has increased 329 percent, according to the Vera Institute of Justice, a nonpartisan New York-based research organization. In 2018, there were 13,695 people in the Nevada prison system. Nevada also has a large geriatric prison population: More than 16 percent of those incarcerated are 55 years and older, according to NDOC data.

“The answer in Nevada is decarceration,” Hocking said. “The answer is not drones and bracelets.”

Some state legislatures that increased pay and offered bonuses to bolster hiring campaigns for their prison systems have seen some success.

In Nebraska, an officer’s typical annual salary was bumped from $41,600 to $58,240, under a law pushed by the governor in 2021. A year later, officer shortages eased significantly, according to a report this month from a state investigator. But at the same time, health care staffing within the correctional department continues to be at critically low levels.

But some states, like West Virginia, can’t find enough political support to raise salaries — even as the department is unable to compete with higher pay offered by neighboring states like Kentucky, Ohio and Virginia. West Virginia corrections officers earn some of the lowest pay in the country. Approximately 1,000 correctional jobs are unfilled.

Lawmakers over the summer failed to pass a law increasing salaries adjusted for cost of living to counteract high attrition among officers working in the eastern panhandle region of the state. That inaction prompted Republican Gov. Jim Justice to issue a second state of emergency over staffing issues, bringing in 150 National Guard troops to provide support.

Still, labor organizers maintain that awarding incremental — and infrequent — salary hikes won’t do enough to permanently solve the crisis. What’s necessary, they say, is restructuring the pay schedule so that state-backed retirement plans are a viable future for corrections officers. And they’re calling for a shift in thinking about what the job entails.

In West Virginia and beyond, those seeking to reverse correctional officer attrition say they’re exasperated by an indifference among state officials to improving quality of life inside prisons, and a public that seems more sympathetic toward alleviating shortages in other industries.

“The public views that as more important than protecting convicted criminals,” said Jason Barrett, a Republican member of the West Virginia House of Delegates who sponsored the locality pay bill. “But the state has an obligation to protect inmates of the state, and we have an obligation certainly to protect state employees.”