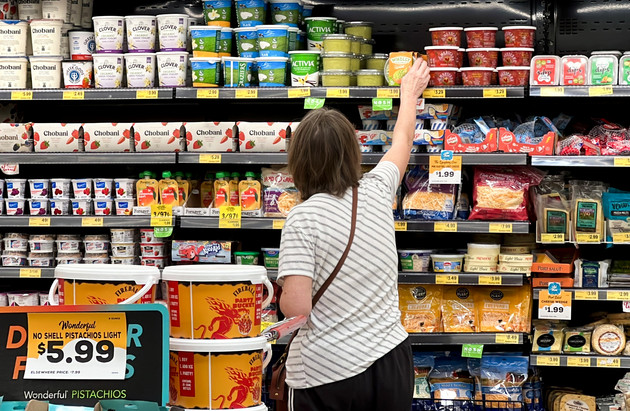 Import prices have dropped, supply chain snarls have been easing for months and retailers have been building up their backroom store of products. | Terry Chea/AP Photo

Officials at the Federal Reserve and in the Biden administration are seeing promising signs that the U.S. might finally be through the worst of inflation. But don’t expect them to declare victory anytime soon.

Import prices have dropped as the value of the dollar has surged. Supply chain snarls have been easing for months. Retailers have been building up their backroom store of products. All of these trends suggest that price spikes should begin to cool off.

But topline inflation data has remained stubbornly high, feeding the steady drumbeat of remarks by central bank policymakers that they can’t let up yet.

On top of that, Fed Chair Jerome Powell and his colleagues got it wrong in 2021; they expected inflation to fade much more quickly than it did. Not only did production and shipping delays last longer than they expected, but Americans’ demand for goods also kept rising. Then, Russia invaded Ukraine, scrambling supply chains anew and making the price of oil skyrocket.

Other unexpected economic shocks could be lurking around the corner, particularly around energy costs.

The situation underscores the peril faced by Fed officials: They’re not confident in their ability to forecast at the moment, and they don’t want to back off before inflation is well and truly tamed. But because they won’t be acting on mere hints that they’re winning that fight, they run a greater risk of ramping up interest rates higher than they need to, causing unnecessary job losses and economic turmoil.

Positive trends, along with many side effects of the Fed’s clampdown on the economy, are unlikely to fully feed into the data until well after the midterm elections next month, robbing Democrats of a key boost to their economic messaging.

Signs of ebbing goods inflation began to show up in Thursday’s consumer price index report, with a sizable drop in used car prices and a slight tick down in furniture costs. Annual inflation slowed to 8.2 percent from 8.3 percent. But the data lacked a more substantial improvement that forecasters had been hoping for, likely keeping the Fed on track for another supersized rate increase in November.

Jared Bernstein, who sits on President Joe Biden’s Council of Economic Advisers, said in an interview there’s clear evidence that the administration’s efforts to boost U.S. output is bearing fruit and will aid in the fight to tame surging prices by helping supply better meet demand.

The White House is trying to be careful to avoid wishful thinking, he said, but supply chain improvements, whether thanks to policy or not, should “eventually ease, to some degree, inflationary pressures.”

“We’re not out of the supply-side woods, but we’re certainly on a path that’s taking us in the right direction, and I think we’re moving pretty quickly down that path,” he added.

The wild card for the Fed is the job market, where low unemployment and steadily rising wages run the risk that consumers will keep supporting higher and higher prices, particularly for services. Although the latest labor market data show that job growth has begun to slow and worker pay is not spiking, spending remains quite strong.

New York Fed President John Williams has compared inflation to an onion, where there have been improvements in the outer and middle layers — commodity prices and the cost of products like durable goods, respectively.

“The innermost layer of the onion consists of underlying inflation, which reflects the overall balance between supply and demand in the economy,” he said in a speech last week. “Therein lies our biggest challenge.”

Though inflation is no longer accelerating, that doesn’t mean it will easily come down to 2 percent — the Fed’s long-run target, said Charles Calomiris, a professor at Columbia Business School. He thinks the central bank will have to raise borrowing costs even higher than it currently forecasts because of excessive demand fed by too much government spending and rates held near zero for too long.

“We’re going to be here a year from now with inflation that’s substantially above 3 percent,” he said.

A mild recession will be necessary to help bring down consumer demand, he said, but unemployment likely won’t have to rise dramatically because wages haven’t kept pace with prices. That means inflation doesn’t appear to be as entrenched in the job market.

Other commentators, like former Clinton Treasury Secretary Larry Summers — who was one of the first prominent Democrats to warn about the risks of inflation last year — say the pain for workers might have to be much higher.

In the meantime, Fed officials have highlighted the lag between signs of easing price pressures and actual inflation data, which “have showed a slower decline than I had anticipated,” Lisa Cook, who joined the central bank’s board in May, said last week.

Sharif said in some categories, it might be that firms are reluctant to sell their products below the elevated prices they bought them at earlier in the year.

“Stuff you’re trying to get rid of now is stuff you paid up for a few months ago,” he said. But eventually that dynamic should subside, he added.

Even rents, which could keep pushing up costs for consumers for years, have showed signs of slowing their ascent, which could further ease inflation in 2023. For now they remain the biggest driver of troubling data.

There’s also at least one reason to hope the inflation forecasts might be better than they were last year — a more sophisticated understanding of the supply problems that have plagued the global economy during the pandemic.

For example, researchers at the New York Fed early this year launched a new index that aggregates relevant data, from freight prices to delivery times, to gauge whether the overall supply picture is getting better or worse. That index has steadily improved since April.

Economists from the White House to Wall Street have begun incorporating it into their modeling to forecast inflation. Combined with more traditional indicators of where prices are headed, such as wage growth, it much more closely matches how inflation has actually behaved.

Gianluca Benigno, head of international studies at the New York Fed, said the index, which he helped develop, might also lead to better forecasting during other supply disruptions as well.

“If you go back to the pre-pandemic world, no one would point out or emphasize the complexity associated with the production structure, which is behind these problems,” Benigno said. “In that sense, it is also relevant looking forward because there might be other shocks.”

Can cats and coyotes co-exist?

Western nations hustle to sync up with Ukraine, each other on missile strike