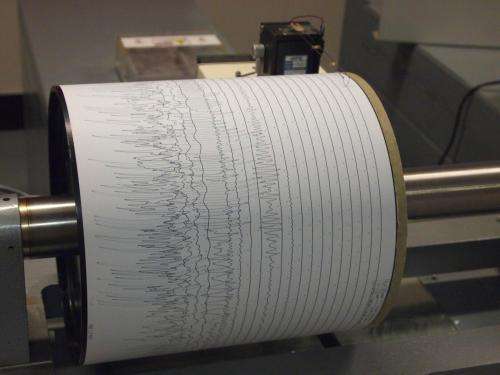 Seismogram being recorded by a seismograph at the Weston Observatory in Massachusetts, USA. Credit: Wikipedia

A magntitude-5.1 earthquake struck Friday on Hawaii’s Mauna Loa, the largest active volcano on the planet that scientists say is in a “state of heightened unrest.”

People across the Big Island reported feeling light shaking from the temblor.

Hawaii County Mayor Mitch Roth said there was no immediate reports of damage or injuries.

At least eight smaller aftershocks followed the quake in the Kau Forest Reserve near the island’s southeastern town of Pahala, according to the U.S. Geological Survey.

The series started with a 4.6-magnitude quake seconds before the larger one, USGS said.

Mauna Loa is not erupting and there are no signs of an imminent eruption at this time. “However, Mauna Loa continues to be in a state of heightened unrest as indicated by increased earthquake activity and inflation of the summit,” USGS said in Friday’s daily update on the volcano. “The unrest is likely caused by renewed input of magma into Mauna Loa’s summit reservoir system.”

Scientists at the Hawaiian Volcano Observatory were monitoring Mauna Loa closely for changes.

Hundreds of responses on the USGS earthquakes website reported weak-to-light shaking across the vast island.

The Pacific Tsunami Warning Center said there was no tsunami threat to Hawaii.