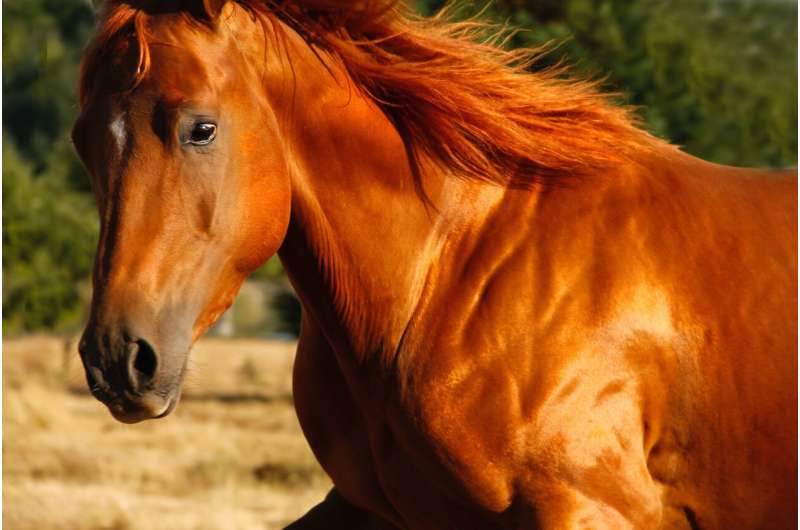 A commonly administered drug used in 94% of thoroughbred racehorses could increase risk of sudden death, according to a new study.

The research—led by the University of Glasgow and published today in the Journal of the American Veterinary Medicine Association—also found multiple other risk factors associated with sudden death, related to the circumstances of the race and individual histories of the horses.

The study is the first ever large-scale study of thoroughbred racehorse sudden death.

While racehorse sudden death is a rare occurrence, the underlying causes are often difficult to identify.

The study analyzed data from more than four million starts in horse racing—covering almost every horse race in the U.S. and Canada over a period of 12 years—and found that around one in 10,000 race starts resulted in a race-day sudden death for a horse.

The researchers identified a notable risk factor related to race day medication. Horses who were recorded as being administered with furosemide were 62% more likely to experience sudden death compared to horses that weren’t on furosemide.

Furosemide is commonly given to prevent exercise-induced pulmonary hemorrhage (bleeding in the airways) and is also associated with enhanced racing performance. As a result, 94% of horse starts in the study were on furosemide.

The ethics of race day medication are controversial, with furosemide already restricted or prohibited on race day in certain circumstances, depending on jurisdiction.

The study results also suggest that it might be possible to identify horses at risk of sudden death before they experience it—for example, due to previous injury and interruption to training/racing. Other risk factors include horse age and sex, season and purse of race and race distance.

Dr. Euan Bennet, Lecturer in Research and Numerical Skills at the University of Glasgow’s School of Biodiversity, One Health and Veterinary Medicine, said, “Over the last 12 years, the overall risk of fatality within three days of racing has decreased by over 30%, but the incidence rate of sudden deaths has not changed significantly. This suggests that while interventions have been made which have contributed to a reduction in catastrophic injury, there are different sources of risk for sudden death which have not yet been identified.

“This study suggests that a risk profile, identifying which horses are at the greatest risk of sudden death, may be possible. Given how rare the outcome is, further work is required to establish any potential interventions which might contribute to a reduction in sudden deaths.

“On the association between furosemide use and sudden death, the fact that furosemide use is so common makes this result particularly remarkable given the statistical power of this large-scale study. Discussions around the ethics of race day administration of drugs should factor in potential risks such as those identified here, and further work is required to understand exactly why we identified this association.”

The data investigated were collected by The Jockey Club in a census-level survey of almost all thoroughbred racing in the U.S. and Canada called the Equine Injury Database (EID).

The study, “Fifteen risk factors associated with sudden death in Thoroughbred racehorses in North America (2009–2021),” is published in the Journal of the American Veterinary Medical Association.