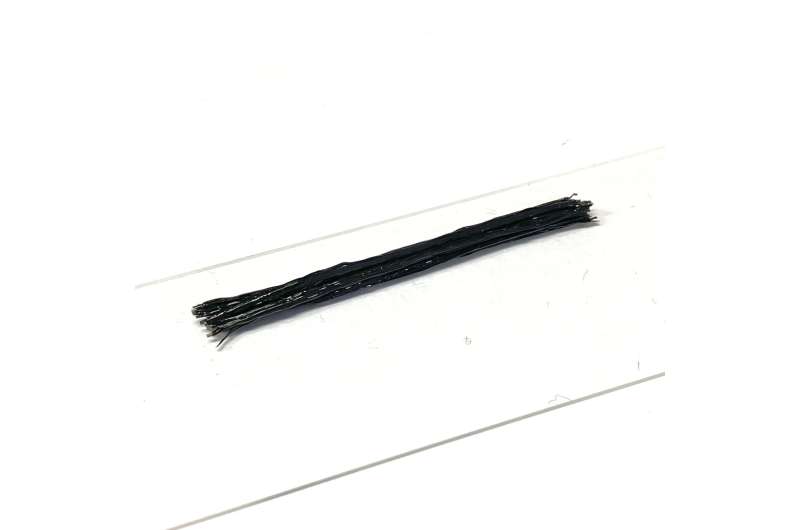 To effectively replicate the movements of humans and animals, robots should integrate muscle-like structures. These artificial muscles should attain an optimal performance across all relevant actuation parameters, including energy density, strain, stress, and mechanical strength.

Researchers at the KAIST and Pusan National University in South Korea have recently developed an actuator for robotics applications that is inspired by mammalian skeletal and muscle structures. This actuator, introduced in a paper published in Nature Nanotechnology, is based on soft fibers with strong contractive actuation properties.

“I came to know about liquid crystal elastomer (LCE) actuators during an academic meeting with Prof. Suk Kyun Ahn, one of the co-authors of the paper,” Sang Ouk Kim, one of the researchers who carried out the study, told Phys.org. “LCEs are promising soft actuator materials with unusually large reversible dimensional change (shrink/relaxation) upon actuation, which is rarely observed in other kinds of actuator materials but highly significant to ideally mimic natural skeletal muscle behavior.”

Many actuators developed in the past are based on LCE materials, a class of polymers that can rapidly change shape in response to environmental stimuli. Despite their shape-morphing advantages, LCE polymers are known to be associated with the relatively poor mechanical properties and weak actuation behavior.

To overcome this limitation, Kim and Prof. Ahn decided to incorporate super-strong graphene fillers within LCE actuators. In addition to enhancing their mechanical properties, the team expected the graphene fillers to enable light-driven, rapid and remotely controllable actuation, owing to the photothermal conversion capability of graphene.

The actuators developed by the researchers are based on soft fibers and include graphene fillers that are finely exfoliated into the LCE material’s matrix. When a laser light is applied on the fiber, the photothermal conversion effect associated with the graphene filler instantly increases the temperature of its surrounding LCE matrix. This results LCE molecules to shift from a liquid crystal aligned state to a so-called isotropic random coiled state, ultimately causing the fibers to shrink in length at a macroscopic scale.

“Once the laser illumination is removed, the fiber restores the original length while LCE matrix is instantaneously cooled down,” Kim said. “The synergistic incorporation of a minor portion (~0.3 wt%) of strong graphene fillers strengthens the actuator material itself as well as its actuation performance. Rapid photothermal conversion enabled by graphene fillers also attains reversible, rapid high-power actuation, which can be easily remote-controllable by external light manipulation.”

One of the most valuable characteristics of the actuator created by Kim and his colleagues is the reversible percolation of the graphene filler network inside it. This process allows the fibers to be reversibly shrunk and relaxed back into their original size, while ensuring the high mechanical strength over the entire actuation cycle.

“This unprecedented behavior greatly strengthens the actuator, particularly in the shrunken actuated state and brings about the intriguing modulation of electrical conductivity depending on actuation state, which is similar to the EMG signal generation of natural muscles. Noticeably, the inherent mechanical weakness of LCE actuator particularly in the actuated shrunken state has been the longstanding critical challenge for the practical utilization of LCE actuators.”

The researchers evaluated their actuator in a series of tests and found that they achieved highly promising results. In fact, they exhibited both the advantageous shape-morphing properties of actuators based on LCE materials, while also enabling a robust and reversible actuation strain.

“Our actuator eventually achieves a practically meaningful actuation performance, which surpasses that of natural animal muscles in many ways, including actuation strain, stress, energy density and power,” Kim said. “Artificial muscles presented in previous works sometimes attained superior performances in one or a few of those characteristics, but there has been no report for this kind of all-round superior performance compared to natural muscle yet.”

Kim and his colleagues finally demonstrated the potential of their actuators by implementing them on soft robots and assessing their performance on a series of tasks. They found that the robots were able to imitate different human and animal movements, for instance lifting a 1kg dumbbell, bending individual fingers on an artificial hand, and reproducing the movement of inchworms.

Interestingly, the team tested a robotic inchworm based on their actuator by having it “race” with a live inchworm. Their system won the race, further highlighting the potential of their single fiber-based actuator for creating super strong and highly performing robots, bionic prosthetic tools and perhaps even reconfigurable smart clothing.

“The next big challenge will be to integrate our artificial muscle with neural activity,” Kim added. “If individual actuator fiber is specifically controllable mimicking neutral control, natural animal like sophisticated movements and locomotion should be possible while interfaced with human brain or AI. Currently, most actuators rely on hard mechanical systems. Our composite soft actuator would be a promising candidate to the address the inherent limitations of traditional mechanical actuation system, such as heavy weight and mechanical rigidity, and to attain truly natural animal like soft robotics.”