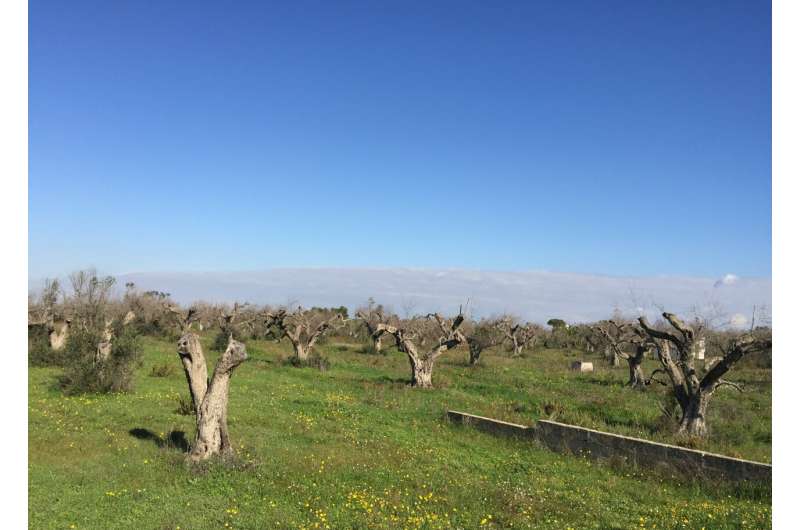 Over the last decade, the lush olive groves one associates with the Italian countryside have become desiccated, as if stuck in a perpetual winter. The culprit is Xylella fastidiosa, a species of aggressive bacteria that have caused devastating epidemics in several important crops. X. fastidiosa now threatens almonds, olives, and grapevines—staples of Europe’s economy and cuisine.

There is currently no effective treatment for diseased almond trees infected by these bacteria, which has pushed researchers to develop and test new treatments. At the University of Girona, Spain, Luís Moll and Aina Baró—plus collaborators from the Montesinos Lab—demonstrated that small peptides (molecules with a chain of up to 50 amino acids) are a promising treatment to prevent plant diseases induced by X. fastidiosa, such as almond leaf scorch (ALS).

Recently published in Phytopathology, their study tested the effects of one specific peptide, BP178, on ALS when delivered to almond plants by endotherapy, which is similar to a plant vaccine. The authors found that the peptide has two functions for disease prevention: It can directly kill the bacteria, and it can trigger plant defense tactics. Corresponding author Prof. Emilio Montesinos remarks, “We demonstrated that the treatment significantly reduces the pathogen population and disease symptoms and that it induces a strong defense response on almond plants.” The results agree with similar studies performed by the researchers in other plants, like tomato.

This discovery represents a significant step in fighting diseases caused by Xylella fastidiosa. According to the authors, using these compounds offers the possibility of sustainable crop protection and disease management, thanks to the biodegradability of the peptide and the low likelihood of the bacteria developing resistance to it. While this study was conducted with plants in a greenhouse, it is expected that this peptide can extend to nurseries and in-field use via commercial endotherapy systems and through optimizing the cost of peptide production for commercial use.

Additionally, future studies can potentially generate novel candidate compounds with the bifunctional action by changing the amino acid sequence to specifically target pathogens, which can be synthetized chemically or produced biotechnologically using microbial or plant biofactories.