In July, a puzzling new image of a distant extreme star system surrounded by surreal concentric geometric rungs had even astronomers scratching their heads. The picture, which looks like a kind of “cosmic thumbprint,” came from the James Webb Space Telescope, NASA’s newest flagship observatory.

The internet immediately lit up with theories and speculation. Some on the wild fringe even claimed it as evidence for “alien megastructures” of unknown origin.

Luckily, our team at the University of Sydney had already been studying this very star, known as WR140, for more than 20 years—so we were in prime position to use physics to interpret what we were seeing.

The secrets of WR140

WR140 is what’s called a Wolf-Rayet star. These are among the most extreme stars known. In a rare but beautiful display, they can sometimes emit a plume of dust into space stretching hundreds of times the size of our entire Solar System.

The radiation field around Wolf-Rayets is so intense, dust and wind are swept outwards at thousands of kilometers per second, or about 1% the speed of light. While all stars have stellar winds, these overachievers drive something more like a stellar hurricane. 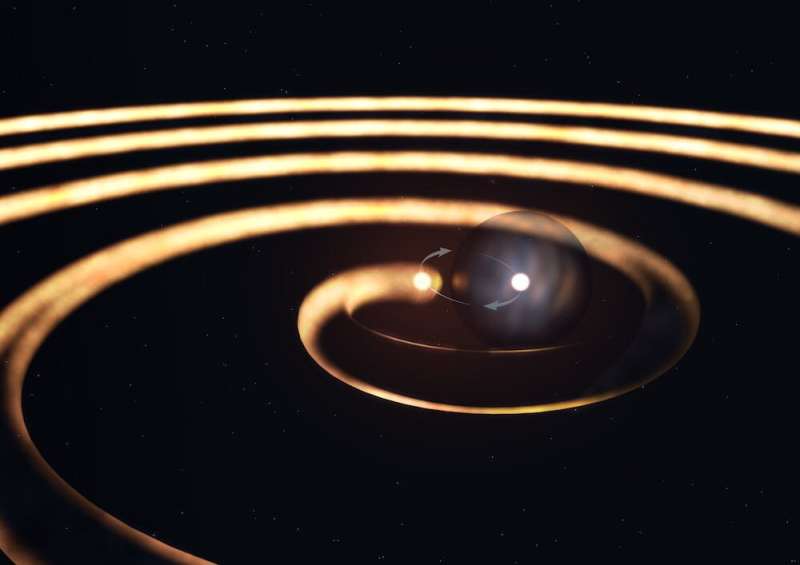 Critically, this wind contains elements such as carbon that stream out to form dust.

WR140 is one of a few dusty Wolf-Rayet stars found in a binary system. It is in orbit with another star, which is itself a massive blue supergiant with a ferocious wind of its own.

Only a handful of systems like WR140 are known in our whole galaxy, yet these select few deliver the most unexpected and beautiful gift to astronomers. Dust doesn’t simply stream out from the star to form a hazy ball as might be expected; instead it forms only in a cone-shaped area where the winds from the two stars collide.

Because the binary star is in constant orbital motion, this shock front must also rotate. The sooty plume then naturally gets wrapped into a spiral, in the same way as the jet from a rotating garden sprinkler.

WR140, however, has a few more tricks up its sleeve layering more rich complexity into its showy display. The two stars are not on circular but elliptical orbits, and furthermore dust production turns on and off episodically as the binary nears and departs the point of closest approach.

Whenever WR140 and its binary companion star are close enough together, a pulse of dust streams into space. An almost perfect model

Except for one niggle. Close in right near the star, the dust was not where it was supposed to be. Chasing that minor misfit turned out to lead us right to a phenomenon never before caught on camera.

The power of light

We know that light carries momentum, which means it can exert a push on matter known as radiation pressure. The outcome of this phenomenon, in the form of matter coasting at high speed around the cosmos, is evident everywhere.

But it has been a remarkably difficult process to catch in the act. The force fades quickly with distance, so to see material being accelerated you need to track very accurately the movement of matter in a strong radiation field.

In each eight-year orbit, a new ring of dust forms around WR140. Credit: Yinuo Han / University of Cambridge, Author provided

This acceleration turned out to be the one missing element in the models for WR140. Our data did not fit because the expansion speed wasn’t constant: the dust was getting a boost from radiation pressure.

Catching that for the first time on camera was something new. In each orbit, it is as if the star unfurls a giant sail made of dust. When it catches the intense radiation streaming from the star, like a yacht catching a gust, the dusty sail makes a sudden leap forward.

The final outcome of all this physics is arrestingly beautiful. Like a clockwork toy, WR140 puffs out precisely sculpted smoke rings with every eight-year orbit.

Each ring is engraved with all this wonderful physics written in the detail of its form. All we have to do is wait and the expanding wind inflates the dust shell like a balloon until it is big enough for our telescopes to image.

Then, eight years later, the binary returns in its orbit and another shell appears identical to the one before, growing inside the bubble of its predecessor. Shells keep accumulating like a ghostly set of giant nesting dolls. 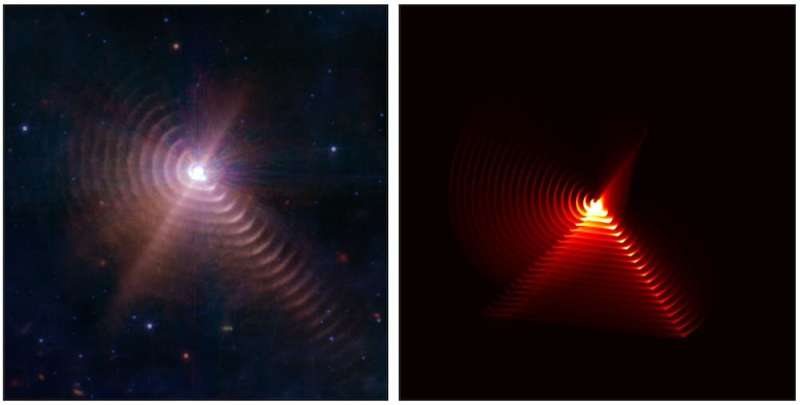 However, the true extent to which we had hit on the right geometry to explain this intriguing star system was not brought home to us until the new Webb image arrived in June.

Here were not one or two, but more than 17 exquisitely sculpted shells, each one a nearly exact replica nested within the one preceding it. That means the oldest, outermost shell visible in the Webb image must have been launched about 150 years before the newest shell, which is still in its infancy and accelerating away from the luminous pair of stars driving the physics at the heart of the system.

With their spectacular plumes and wild fireworks, the Wolf-Rayets have delivered one of the most intriguing and intricately patterned images to have been released by the new Webb telescope.

This was one of the first images taken by Webb. Astronomers are all on the edge of our seats, waiting for what new wonders this observatory will beam down to us.