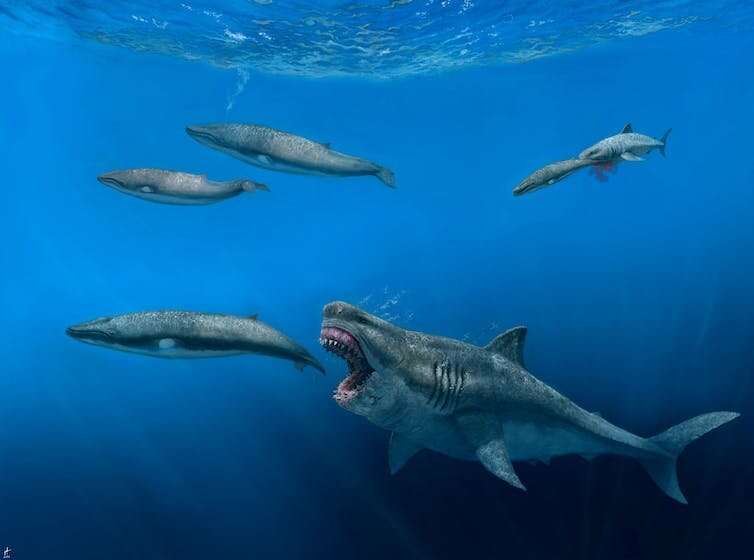 The reconstructed megadolon was 16 metres long and weighed over 61 tons. Credit: J.J. Giraldo

In a new 3D modeling study published this week in Science Advances, we show that the giant extinct shark, Otodus megalodon, was a true globetrotting super-predator.

It was capable of covering vast distances in short order, and could eat the largest of modern living super-predators, the killer whale, in five gargantuan bites. It could have swallowed a great white shark whole.

The largest shark that ever lived

Megalodon was the largest shark that ever lived, and it was around for a long time—from around 23 million to 2.6 million years ago. At one time its range was enormous: its fossilized teeth have been found on every continent except Antarctica. These teeth are not hard to recognize if you come across them, as they can be up to 18 centimeters long.

Just why this formidable predator went extinct remains a mystery. It could have been linked to global cooling, or competition from other predators such as orcas (killer whales). This is just one of many unanswered questions.

One thing we know for sure is that the megalodon was big—but just how big has remained a point of contention among scientists, because previous estimates have been effectively based on just fragmentary remains.

And its size really matters, because it helps us to interpret its biology—the kinds of prey an animal can kill and eat, the amount of food it needs to survive and the speed at which it can travel.

The question of diet is particularly important as it determines an animal’s role and impact on its ecosystem. Historically, many thought megalodon took very big prey, including large whales.

But it has recently been argued that it may not have been quite the super-predator it had been cracked up to be, concluding that it concentrated on lesser prey such as seals, dolphins and small whales between around two and seven meters in length. If correct, this would have major implications for our understanding of how the marine ecosystems of the time functioned.

Our new model now suggests it did in fact prefer to take on much larger prey.

I’ve long had an interest in megalodon. I published a paper with colleagues back in 2007 wherein we built a computer simulation to predict its bite force.

Our estimate—a car-crushing 18 metric tons—was dependent on the assumed body mass of the animal, so I was delighted when colleagues from overseas asked me to help with an attempt to develop a more accurate model of the whole shark. From there, we could more reliably determine its size.

Previous estimates of the body mass and proportions of megalodon have largely just extrapolated on data from single fossilized vertebrae, which leaves a lot of room for error. Others were based on direct comparison with the living great white shark; however, it’s now pretty clear that the two weren’t closely related.

In our new study, we based our estimates on 3D modeling of the most complete specimen known, represented by a largely intact vertebral column held in a Belgian museum. We quantified its total length, weight, and the size of its gape from the complete digital model.

Lastly, we estimated the megalodon’s cruising speed, the volume of its stomach, its daily energetic demands and the rate at which it likely encountered prey.

We concluded that this particular megalodon was around 16 meters long and weighed in at more than 61 metric tons. This is considerably larger than recent estimates of a mere 48 metric tons.

A whale for breakfast

Based on other isolated fossil vertebrae, it’s likely the largest megalodon grew to 20 meters in length. We further determined that the Belgian specimen’s maximum gape was around 1.8 meters and that its stomach could have held 9.5 cubic meters of food.

This suggests it could have entirely consumed the largest of living killer whales (around 8 meters) in just five bites.

Hypothetically, it could have eaten another iconic super-predator, the Tyrannosaurus rex, in just three bites. As for great white sharks, a megalodon could have swallowed a large one whole.

Our results suggest megalodon could have comfortably cruised at over 5 kilometers per hour. This is much faster than the largest living fish, the filter-feeding whale shark, or even the great white shark, which cruises at around 3 kilometers per hour.

This ocean-spanning super-predator could travel vast distances in short order, increasing prey encounter rates and allowing it to quickly move to take advantage of seasonal changes in prey abundance.

Results from our analysis of energetics suggest that having eaten a big killer whale for breakfast, this megalodon could have traveled around 7,000km before needing to feed again.

In short, our results show that megalodon really was the super-predator it’s been cracked up to be, and more.

No creature, no matter its size, was safe from the jaws of this super shark. Its extinction likely sent tremendous cascading effects through marine environments of the time.

Inside the frantic, final days of record-keeping that landed Trump in hot water