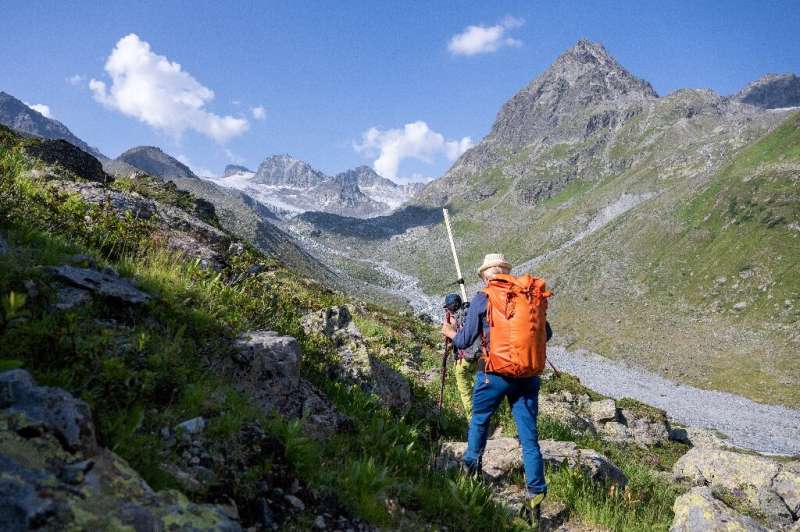 Such ice formations are a unique time capsule.

Jumping from rock to rock to rock over a creek formed off Austria’s Jamtal glacier, scientist Andrea Fischer worries that precious scientific data will be irreversibly lost as the snow and ice melt faster than ever.

“I couldn’t have imagined that it would ever melt as dramatically as this summer… Our ‘archive’ is melting away,” says the glaciologist.

Fischer—vice director of the Institute for Interdisciplinary Mountain Research at the Austrian Academy of Sciences—has spent more than 20 years surveying Jamtal and four other Alpine glaciers across Austria’s highest peaks for the oldest areas of ice.

For scientists looking to reconstruct the Earth’s climate in the distant past, such ice formations are a unique time capsule stretching back thousands of years.

The glaciers contain an invaluable treasure trove of data—as they grew, the ice encapsulated twigs and leaves, which can now be carbon-dated, Fischer explains.

And based on the age of such material and the depth where it was found, scientists can infer when ice grew during colder periods, or when warmer conditions caused it to melt.

But now the glaciers are melting rapidly—including the one in the remote and narrow Jamtal valley, not far from where tourists found the stunningly preserved 5,300-year-old mummy of Oetzi, the Iceman, in the 1990s.

Temperatures in Europe’s highest mountains have risen by nearly two degrees Celsius in the past 120 years—almost double the global average, according to the International Commission for the Protection of the Alps (CIPRA).

The Alps’ roughly 4,000 glaciers have since become one of the starkest signs of global warming. 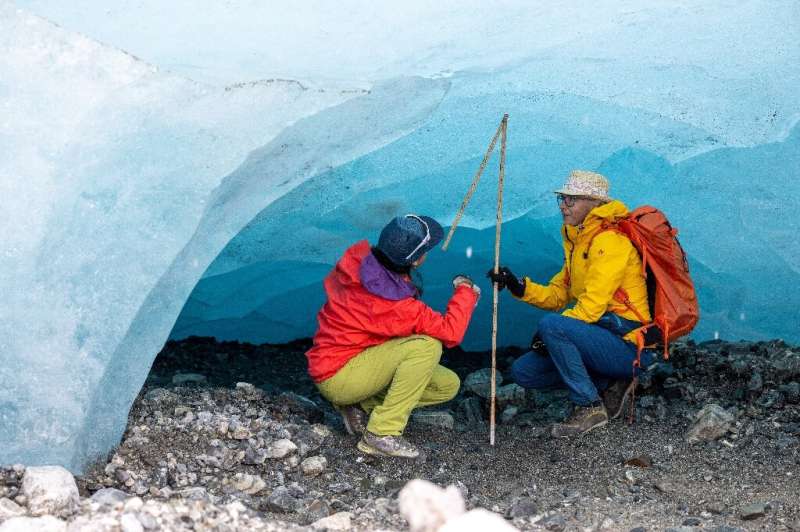 The Jamtal glacier has been losing about one meter (three feet) from its surface annually, but this year it has already lost more than a meter, Fischer says.

“And we’ve got at least two months of summer left… where the glacier is entirely exposed to the sun,” she warns.

Snow usually protects most of the glacial ice from the sun until September, but the little snow that fell last winter had already melted by early July.

“This year is outrageous compared to the average of the past 6,000 years,” says Fischer.

“If this continues, in five years, Jamtal glacier won’t be a glacier anymore.”

By the end of the summer, Fischer fears that about seven meters of depth will have melted off the surface—or about 300 years of climate “archives”.

“We need the data the glaciers hold to understand the climate of the past—and to create models of what awaits us in the future,” she says.

Fischer and her team have drilled on both the Jamtal and other nearby glaciers to extract data, taking out ice samples up to 14 meters deep.

As temperatures rise and the glaciers become more unstable, they are compelled to take additional safety precautions—11 people died in a glacial ice avalanche in the Italian Dolomites in July, the day after temperatures there rose to new records.

In Galtuer, the nearest village to Jamtal glacier, the Alpine Club is already offering a “Goodbye, glacier!” tour.

‘My heart is bleeding’

In Galtuer, the nearest village to Jamtal with 870 residents who are mostly dependent on tourism, the Alpine Club is already offering a “Goodbye, glacier!” tour through the once ice-filled valley to raise awareness about the effects of climate change.

Where the ice has retreated, scientists found that within three years about 20 species of plants, mostly mosses, have taken over. In some areas, larches are growing, according to Fischer.

“If the glacier is gone in five years, that’s a pity, because it’s part of the landscape,” says Sarah Mattle, who heads the Alpine Club.

“But then there’ll also be new paths, and maybe there’ll be an easier hike over the mountains than over the ice. It’ll all be a matter of adapting,” the 34-year-old adds.

Other locals like Gottlieb Lorenz, whose great-grandfather was the first manager of the 2,165-meter-high Jamtal cabin set up as a refuge for mountaineers, are heartbroken.

“My heart is bleeding when I think about how magnificent and mighty the glacier was and what a miserable tiny pile it is today,” the 60-year-old says.

He points at a black-and-white photo taken in 1882 showing a thick ice sheet flowing past the cabin.

Today, the ice is a 90-minute hike away.