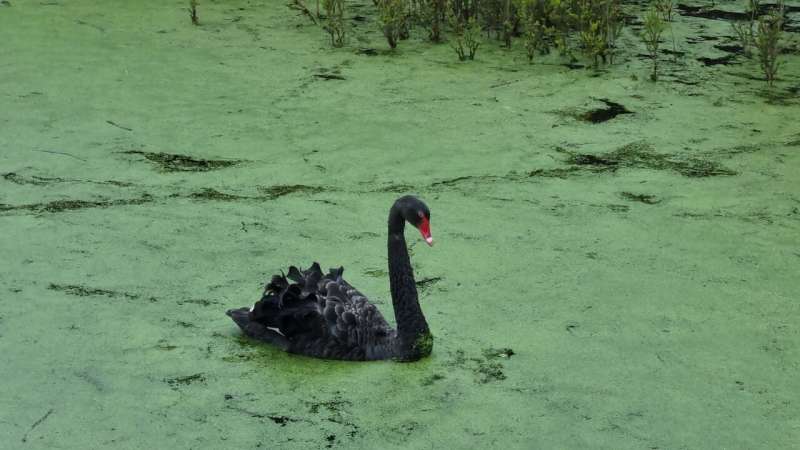 The unique genetics of the Australian black swan leaves the species vulnerable to viral illnesses such as avian flu, University of Queensland research has revealed.

The UQ-led study has generated a first-ever genome of the black swan which revealed the species lacks some immune genes which help other wild waterfowl combat infectious diseases.

Associate Professor Kirsty Short from UQ’s School of Chemistry and Molecular Biosciences said the geographic isolation of Australia’s black swans has meant limited exposure to pathogens commonly found in other parts of the world leading to reduced immune diversity.

“Unlike Mallard ducks for example, black swans are extremely sensitive highly pathogenic avian influenza—HPAI which is often referred to as bird flu—and can die from it within three days,” Dr. Short said.

“Our data suggests that the immune system of the black swan is such that, should any avian viral infection become established in its native habitat, their survival would be in peril.

“We currently don’t have HPAI in Australia, but it has spread from Asia to North America, Europe, North Africa and South America.

“When it was introduced to new locations, such as Chile and Peru, thousands of wild seabirds perished.

“The risk to one of Australia’s most unique and beautiful birds is very real, and we need to be prepared if we hope to protect it.”

With the knowledge from the UQ study, Dr. Short said researchers and conservationists hope to be able to better protect not only the black swan, but also other susceptible species across the globe.

“We want to increase awareness about how vulnerable Australia’s bird species are to avian influenza and the highly precarious situation they are in,” Dr. Short said.

This research was published in Genome Biology.

Supreme Court could not identify who shared draft abortion opinion

Endangered birds can be protected from predators with chemical camouflage