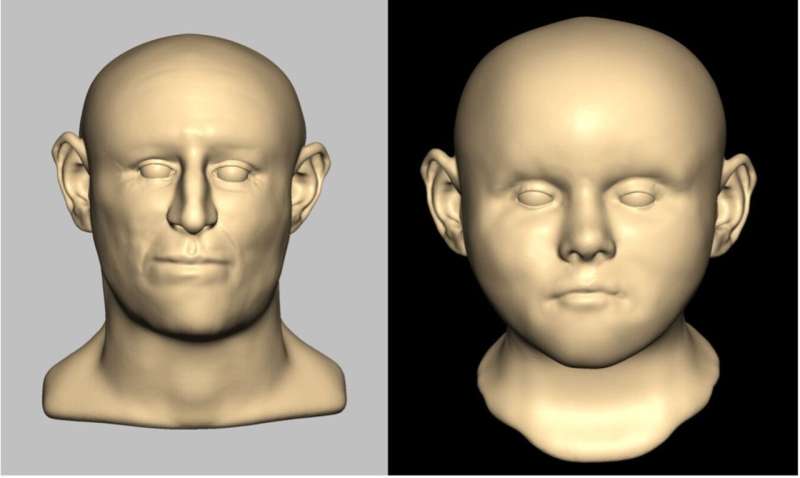 Based on the skeletal remains, scientists reconstructed the face of a male adult (left) and a child (right). Credit: Professor Caroline Wilkinson, Liverpool John Moores University

Seventeen bodies found at the bottom of a mediaeval English well were likely Jews who were murdered in an anti-Semitic massacre more than 800 years ago, scientists have revealed.

The massacre took place in 1190 AD in the eastern city of Norwich, where just decades prior the seeds had been planted for an “anti-Semitic conspiracy theory that persists up to the present day,” they said in a new study.

The scientists used an array of techniques—including analysing the oldest known Jewish genomes—to unravel the mystery.

It began when construction workers were digging up land for a future shopping centre in Norwich in 2004. They stumbled upon the remains of at least 17 people—six adults and 11 children, including three sisters—in the old well.

The bodies were buried at strange angles, some head-first, suggesting the possibility of violent death.

Ian Barnes, a geneticist at London’s Natural History Museum, first started looking into the remains while working on the BBC documentary series “History Cold Case” in 2011.

“We first thought it more likely that they were the victims of some sort of plague, epidemic, famine, something like that,” Barnes, one of the authors of the study published in the journal Current Biology this week, told AFP.

Using radiocarbon dating, the team narrowed down the date of the deaths to between 1161-1216 AD.

DNA analysis of six of the victims found they were predisposed to certain genetic diseases.

Computer simulations then showed that the frequency of these diseases was roughly the same for the Norwich victims as for modern Ashkenazi Jews, indicating a common ancestry.

This would make them the oldest Jewish genomes ever analysed.

“Nobody had analysed Jewish ancient DNA before because of prohibitions on the disturbance of Jewish graves,” Barnes said. “However, we did not know this until after doing the genetic analyses.”

It also sheds light on a known historical event when the number of Ashkenazi Jews suddenly dwindled—called a population bottleneck—which causes such genetic variants to occur.

The bottleneck was previously believed to have taken place up between 500 to 800 years ago.

But Mark Thomas, a study co-author and geneticist at University College London, told AFP the new research “strongly suggests” that the bottleneck must have predated the Norwich victims, meaning it could have occurred hundreds of years earlier than thought.

The scientists also found indications that a young boy in the well had blues eyes and red hair—anti-Semitic stereotypes at the time often involved red hair.

Their analysis pointed to a single event—violence during anti-Semitic riots recorded in Norwich on February 6, 1190 AD.

Barnes said that “anti-Semitic feelings were riding high because plans were in place to conduct the Third Crusade”.

And less than 50 years earlier, a local boy had been brutally murdered in an event that cast a long shadow. The family of the boy, who was later dubbed William of Norwich, blamed his murder on local Jews.

It became the first known version of the anti-Semitic “blood libel” myth, in which Jews are falsely accused of killing Christian boys to use their blood in rituals.

“This antisemitic conspiracy theory persists today, its origins lie within the soil of Norwich,” tweeted Adam Rutherford, a geneticist at University College London.

“The bodies in the well present a unique opportunity to assess the roots of this contemporary racism.”