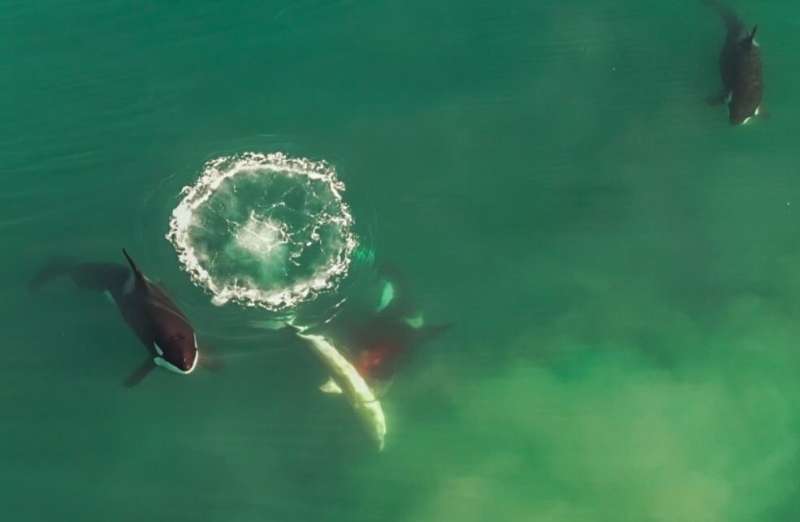 Scientists have published new findings confirming that orcas hunt great white sharks, after the marine mammal was captured on camera killing one of the world’s largest sea predators.

A pod of killer whales is seen chasing sharks during an hour-long pursuit off Mossel Bay, a port town in the southern Western Cape province, in helicopter and drone footage that informed a scientific study released this week.

“This behavior has never been witnessed in detail before, and certainly never from the air,” said lead author Alison Towner, a shark scientist at Marine Dynamics Academy in Gansbaai, South Africa.

One clip shows five orcas chasing and killing a great white and scientists believe three more were mauled to death during the hunt.

Orcas, the ocean’s apex predator, have been known to prey on other shark species, but evidence of attacks on great whites was previously limited.

The study did not address the reasons behind the behavior.

One of the whales was known to have attacked white sharks before, but the other four were not.

The authors said this suggested the practice was spreading, with earlier studies having established that the black and white animals can learn from one other through “cultural transmission”.

Sharks disappeared from the area after the attack, with only one great white spotted in the next 45 days, according to the paper that was published in scientific journal Ecology.

The authors said this confirmed sharks have a flight response and could have broader implications.

The images were filmed in May and one of the videos first aired in June.