Of all known planets, Earth is as friendly to life as any planet could possibly be—or is it? If Jupiter’s orbit changes, a new study shows Earth could be more hospitable than it is today.

When a planet has a perfectly circular orbit around its star, the distance between the star and the planet never changes. Most planets, however, have “eccentric” orbits around their stars, meaning the orbit is oval-shaped. When the planet gets closer to its star, it receives more heat, affecting the climate.

Using detailed models based on data from the solar system as it is known today, UC Riverside researchers created an alternative solar system. In this theoretical system, they found that if gigantic Jupiter’s orbit were to become more eccentric, it would in turn induce big changes in the shape of Earth’s orbit.

“If Jupiter’s position remained the same, but the shape of its orbit changed, it could actually increase this planet’s habitability,” said Pam Vervoort, UCR Earth and planetary scientist and lead study author.

“Many are convinced that Earth is the epitome of a habitable planet and that any change in Jupiter’s orbit, being the massive planet it is, could only be bad for Earth,” Vervoort said. “We show that both assumptions are wrong.”

The researchers are interested in applying this finding to the search for habitable planets around other stars, called exoplanets. 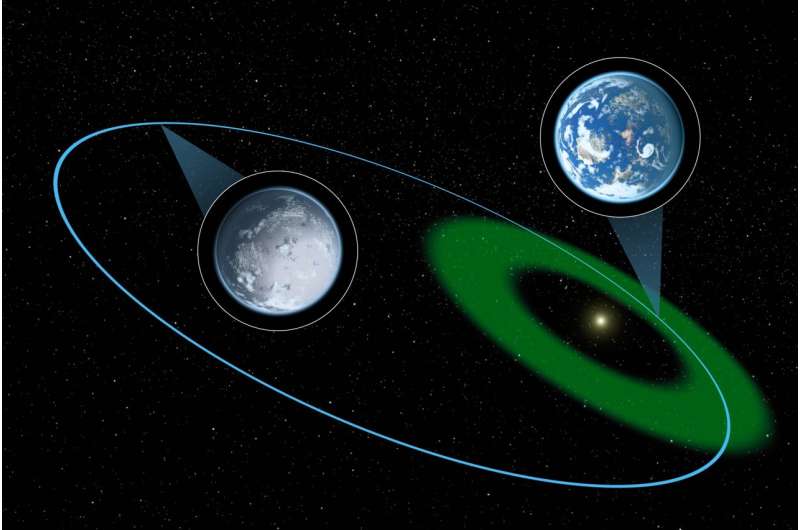 A habitable zone, shown in green here, is defined as the region around a star where liquid water, an essential ingredient for life as we know it, could potentially be present. Credit: NASA/JPL-Caltech

“The first thing people look for in an exoplanet search is the habitable zone, the distance between a star and a planet to see if there’s enough energy for liquid water on the planet’s surface,” said Stephen Kane, UCR astrophysicist and study co-author.

During its orbit, different parts of a planet receive more or fewer direct rays, resulting in the planet having seasons. Parts of the planet may be pleasant during one season, and extremely hot or cold in another.

“Having water on its surface a very simple first metric, and it doesn’t account for the shape of a planet’s orbit, or seasonal variations a planet might experience,” Kane said.

Existing telescopes are capable of measuring a planet’s orbit. However, there are additional factors that could affect habitability, such as the degree to which a planet is tilted toward or away from a star. The part of the planet tilted away from the star would get less energy, causing it to be colder.

This same study found that if Jupiter were positioned much closer to the sun, it would induce extreme tilting on Earth, which would make large sections of the Earth’s surface sub-freezing.

It is more difficult to measure tilt, or a planet’s mass, so the researchers would like to work toward methods that help them estimate those factors as well.

Ultimately, the movement of a giant planet is important in the quest to make predictions about the habitability of planets in other systems as well as the quest to understand its influence in this solar system.

“It’s important to understand the impact that Jupiter has had on Earth’s climate through time, how its effect on our orbit has changed us in the past, and how it might change us once again in the future,” Kane said.