A skeletal reconstruction of Whatcheeria deltae (credit B. Otoo). This study made thin-sections of Whatcheeria thigh bones (femora) including a juvenile femur that revealed a type of bone that is associated with elevated growth rates. In histological section and under polarized light, this disorganized tissue in juvenile Whatcheeria femora suggest that this animal grew quickly early in its lifetime. Credit: B. Otoo

The rise of tetrapods (four-limbed vertebrates) is one of the iconic evolutionary transitions preserved in the fossil record. These animals, which lived about 385 to 320 million years ago during the Devonian and Carboniferous periods of Earth’s history, set the stage for the evolution and diversification of all other terrestrial vertebrates as we know them today, including amphibians, reptiles, birds, and mammals like humans.

It was long thought that these early animals grew very slowly throughout their lifetime, gradually getting bigger and bigger, similar to a modern salamander. However, in a new study in Communications Biology researchers in the Department of Organismic and Evolutionary Biology (OEB) at Harvard University, the Committee on Evolutionary Biology (CEB) at the University of Chicago, and the Field Museum of Natural History cracked open the fossil femora (thigh) bone of a range of growth stages in the early tetrapod, Whatcheeria deltae, and found evidence that the animal grew quickly into adulthood, calling into question conventional wisdom on tetrapod growth.

Lead author Megan R. Whitney, former postdoctoral researcher in OEB, and senior author Professor Stephanie E. Pierce (OEB), Curator of Vertebrate Paleontology in the Museum of Comparative Zoology, have been studying early tetrapods to better understand how they grew, which helps to provide more clarity into the life histories of the animals. “Examining these fossils is like reading a storybook and we are trying to read as many chapters as possible by looking at how juveniles grow building up to adulthood,” said Whitney, “because of where Whatcheeria sits in the early tetrapod family tree we wanted to target this animal and look at its storybook at different stages of life.”

The rarity of early tetrapod samples in the fossil record is a challenge for scientists who are often working from incomplete fossil bodies or species groups. Whatcheeria, however, is a unique exception because it is represented by hundreds of bones from several individuals of different sizes that were all preserved in one locality in Iowa. “Whatcheeria is one of the stars of our paleontology collection,” said co-author Dr. Ken Angielczyk, MacArthur Curator of Paleomammology at the Field Museum. “It is one of the best represented early tetrapods in the fossil record, and the abundance of material lets us ask questions about its biology that are impossible for nearly all of its contemporaries.”

The growth of Whatcheeria at four different stages of life were studied by examining the kind of bone present at specimen representatives from each stage. Bone organization can be used as a proxy for growth rate and this study reports disorganized, fibrolamellar bone in juvenile specimens and more organized bone in adult specimens. This pattern of fast rapid growth early in the life of Whatcheeria, followed by slow and reduced growth in the adults is a new finding in early tetrapods. This finding suggests that rather than growing slow-and-steady throughout their lives, at least some early tetrapods were growing rapidly to reach their adult size. Credit: Skeletal reconstruction by B. Otoo.

Whatcheeria resembled an over-sized salamander with robust legs and arms that supported its weight on land, yet had other anatomical features that suggest it was still bound to water. Whatcheeria lived on the margins of a lowland terrestrial lake at the interface of water and land between about 331 and 326 million years ago, suggesting these animals spent time in both aquatic and terrestrial habitats.

Co-author Benjamin K.A. Otoo (CEB) and Angielczyk provided nine representative samples spanning the known size classes of Whatcheeria from juvenile to adult. Whitney and Pierce then made wafer thin slices of the fossil to examine the microscopic structure of the bone tissues in the thigh bones (femora) by placing the wafers under a polarized light microscope. When they cracked open and examined the juvenile bone sample they found evidence of fibrolamellar bone, which is primary bone tissue associated with fast growth.

“I have a very distinct memory of jumping on slack with Stephanie [Pierce] and saying this breaks all of the rules that we thought of for how growth is evolving in these early tetrapods,” said Whitney.

Pierce and Whitney recalled one of their earlier studies on the tetrapod Greererpeton, a slightly younger Carboniferous early tetrapod, which showed a very different growth strategy of moderate growth with a period of no growth for a long period of time. They hypothesized this could be due to migration of the animal between bodies of water.

Under polarized light, an image of the fibrolamellar bone described in the youngest specimens sampled in this study. The vascular spaces (porous, purple spaces) and bone tissue (pink) are haphazardly organized suggesting rapid overall growth of the animal. Credit: M. Whitney

“We saw this in multiple individuals of Greererpeton, so when we looked at the bones of Whatcheeria and found something completely different again, we knew these animals and their life histories must be affected by their interactions with their environment and their places in their ancient ecosystems,” said Pierce.

Whatcheeria is one of the largest animals recovered from the fossil site in Iowa. The large size combined with the evidence of fibrolamellar bone led researchers to hypothesize that Whatcheeria may have grown fast to quickly reach the large size necessary to be a top predator in its environment.

“If you’re going to be a top predator, a very large animal, it can be a competitive advantage to get big quickly as it makes it easier to hunt other animals, and harder for other predators to hunt you,” said Pierce. “It can also be a beneficial survival strategy when living in unpredictable environments, such as the lake system Whatcheeria inhabited, which went through seasonal dying periods.”

The assumption has always been that only amniotes (reptiles, birds and mammals) deposited fibrolamellar bone consistent with fast growth and that slow growth was ancestral for tetrapods. But as Whitney and Pierce discovered, this bone tissue type evolved close to the origin of the first tetrapods, much earlier than anybody ever expected. 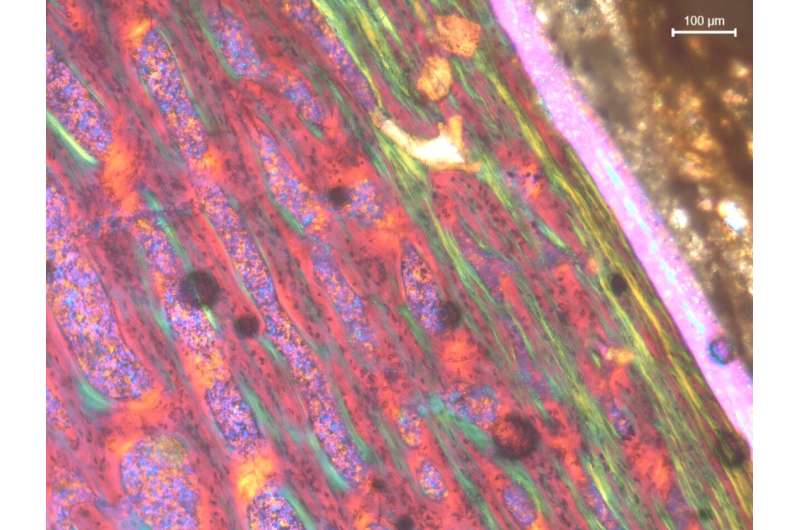 Under polarized light, an image of the fibrolamellar bone at the outer surface of the femur of the youngest specimens sampled in this study. The vascular spaces (porous, purple spaces) and bone tissue (pink) are haphazardly organized suggesting rapid overall growth of the animal. Credit: M. Whitney

“Whatcheeria’s elevated growth rates as a juvenile shows us that maybe slow and steady growth throughout a lifetime is not actually the ancestral condition for all tetrapods,” said Whitney, “and this finding contributes to the diversity of patterns we see as we continue to sample more and more early tetrapods. We’re seeing they are not all slow, sluggish animals, but are incredibly diverse in their own right.”

Whitney, currently Assistant Professor at Loyola University Chicago, and Pierce plan to continue investigating the bone tissue microstructure of early tetrapods to reveal their life histories and how they relate to their ecological niche, specifically targeting animals found earlier in the fossil record than Whatcheeria. “We recently gathered bone histology data on a relative of Whatcheeria using advanced synchrotron technology,” said Pierce, “and our exciting preliminary results point to yet another unexpected growth strategy.”