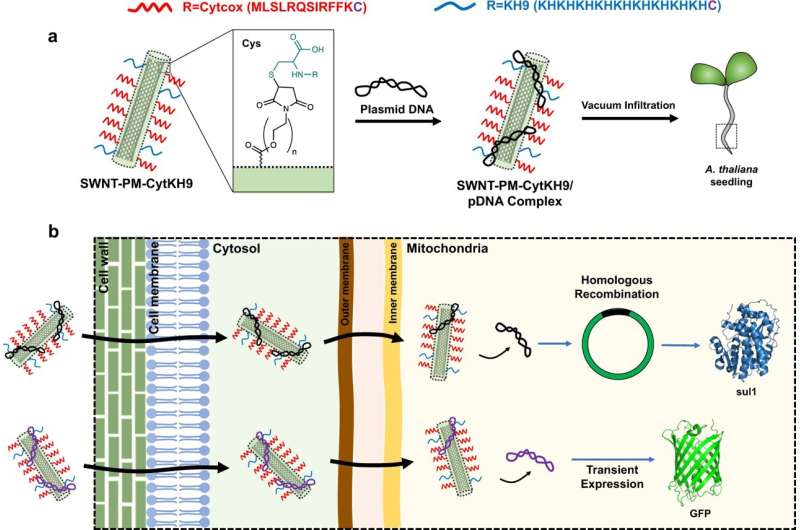 Overall schematic of the SWNT-PM-CytKH9 delivery system. a Mitochondria-targeting (Cytcox in red) and DNA-complexing (KH9 in blue) peptides with a Cys on the C-terminus are functionalized (inset) via Michael addition to the polymer layer (green) on the SWNT. The resulting SWNT-PM-CytKH9 is complexed with pDNA and introduced into A. thaliana via vacuum infiltration. Both peptides contain an extra Cys residue at the C-terminus for conjugation to the maleimide group on the polymer. b SWNT-PM-CytKH9 passes through the cell and mitochondrial membranes to deliver and release the pDNA cargo in the mitochondria. Depending on the pDNA used, the pDNA can be transiently expressed or undergo homologous recombination before expression. Credit: Nature Communications (2022). DOI: 10.1038/s41467-022-30185-y

RIKEN biologists have found an effective way to smuggle genetic material into the energy generators of plant cells, opening up the possibility of coaxing plants to produce commercially useful compounds. Their research appears in Nature Communications.

With the global population expected to reach nearly 10 billion people in 2050, the ability to tinker with the genetics of plants to boost the production of food will be vital to feed the world.

Plants are also anticipated to become biofactories for producing useful chemicals such as drugs and fuels. “They can be engineered to produce other stuff besides food, such as various chemicals, pharmaceuticals, and recombinant proteins,” says Simon Law of the RIKEN Center for Sustainable Resource Science (CSRS). “The fact that you can use plants to make a lot of different things makes biotechnology such a promising field.”

One way to “reprogram” plants is to import genetic material into their cells, but this is challenging due to the thick cell wall that blocks many biomolecules.

Carbon nanotubes—rolled-up tubes of graphene that are a mere nanometer or so in diameter—are sufficiently slim to slip through the cell wall. But once inside the plant cell, carbon nanotubes are not very effective at targeting mitochondria—a key organelle responsible for generating energy and making and breaking down various compounds.

“Getting stuff through the cell wall, the cell membrane and then past mitochondria membranes is difficult and it hadn’t been achieved with high efficiency previously,” notes Law.

By conjugating the peptides on carbon nanotubes, the team enhanced the efficiency of DNA transfer to mitochondria by a remarkable 30 times compared with previous attempts that just used peptides.

“The first time I ran the experiment, I doubted the results as they seemed too high to be reasonable,” recalls Law. “But I became more confident after repeating it a few times and obtaining similar results.”

The researchers demonstrated the usefulness of their method by using it to import a gene that enhanced the growth rate of plants. Other potential uses include speeding up breeding programs and altering metabolic pathways so that they produce commercially useful chemicals. Furthermore, by varying the peptides coated on the nanotubes, it should be possible to target other organelles in plant cells.

Climate change threatens farm animals: Italian researchers are using genomics to try to save them