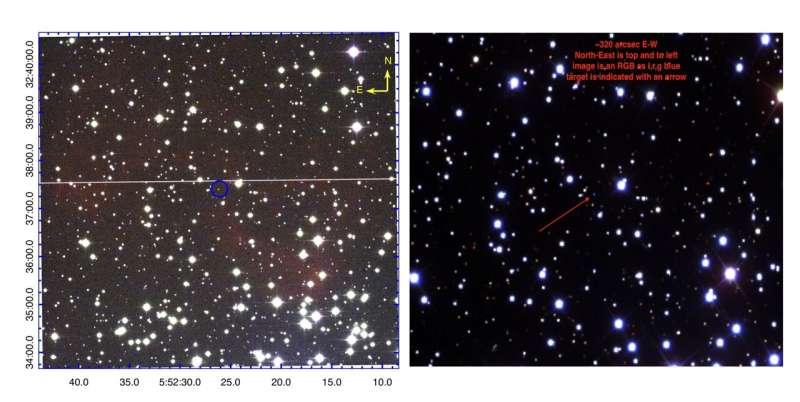 An international team of astronomers led by members of the Laboratory for Space Research (LSR) and Department of Physics at The University of Hong Kong (HKU), have discovered a rare celestial jewel—a so-called Planetary Nebula (PN) inside a 500 million-year-old galactic open cluster (OC) called M37 (also known as NGC2099). This is a very rare finding of high astrophysical value. Their findings have just been published in the open-access Astrophysical Journal Letters.

PNe are the ejected, glowing shrouds of dying stars that shine with a rich emission line spectrum and display, as a result, their distinct colors and shapes that make them photogenic magnets for public interest. It was no coincidence that one of the first James Webb Space Telescope images released to the public was a PN.

The PN, with the ungainly name of IPHASX J055226.2+323724, is only the third example of an association between a PN and an OC out of the ~4,000 PNe known in our galaxy. It also appears to be the oldest PN ever found. The small team led by Professor Quentin Parker, director of the HKU LSR, have determined some interesting properties for their discovery: The authors found the PN has a kinematic age of 70,000 years. This estimate is based on how fast the nebula is expanding, as determined from the PN emission lines, and assuming this speed has remained effectively the same since the beginning, and is the time elapsed since the nebular shell was first ejected by the host, a dying star. This compares to typical PN ages of 5,000–25,000 years. It is truly a grand old dame in PN terms, but of course, a mere blink of the eye in terms of the life of the original star itself, which runs to hundreds of millions of years.

Because this “grand old dame” lives in a stellar cluster, this environment enables the team to determine powerful additional parameters not possible for the general galactic PN population. These include estimating the mass of the PN’s progenitor star when it turned off the stellar main sequence, as derived from the observed properties of the thousands of stars in the cluster when plotted in a so-called color-magnitude diagram. The team can also estimate the residual mass of the central star that ejected the PNe via theoretical isochrones and observed properties of the hot, blue central star. As a result, they determined the mass of the star that ejected the PN gaseous shell when it was born, and how much mass is now left in its residual, contracting hot core (which is already a white dwarf star). Fresh Gaia data for the hot, blue PN central star also provide a good distance estimate, allowing the PN’s actual size at this extreme age to be determined as 3.2 parsecs (1pc equals 3.26 light-years) in diameter—unsurprisingly, perhaps also at the extreme end of known PN physical sizes.

Former HKU Ph.D. student Dr. Vasiliki Fragkou, the first author of the study, said, “I am so excited to be able to work on these fascinating rare cases of OC-PN associations because they keep turning up important science results, like all three cases we have found are butterfly (bi-polar) PN in terms of shape, all are very faint and highly evolved, and all have Type-I chemistry according to their emission lines, and of course, all have intermediate to high progenitor masses.”

Corresponding author Professor Quentin Parker said, “This is only the third example of a PN found in a galactic open star cluster, and my group has found all three confirmed examples. They are incredibly rare, but also very important, as these beautiful objects allow us to independently determine points on the so called initial to final mass relation (IFMR) for stars—an important astrophysical relation— independent of the traditional method of using white dwarfs in clusters. Intriguingly, all our points lie just below the empirical IFMR trend currently established but add to the ‘kink’ in this relation found recently in the two to three solar mass range for the original progenitor mass by Marigo et al. in the Nature Astronomy journal. Our OC-PN points fortuitously are found in currently sparsely populated regions of the IFMR, making them even more valuable.”

Co-author Professor Albert Ziljstra, Hung Hing Ying Distinguished Visiting Professor in Science and Technology at HKU LSR from the University of Manchester, said, “This new result implies that the location of a PN in an OC provides an environment suitable for allowing the PNe to expand and fade without disruption by the ambient ISM (which is typically much weaker in an OC) and not as would be the case in the galaxy.”