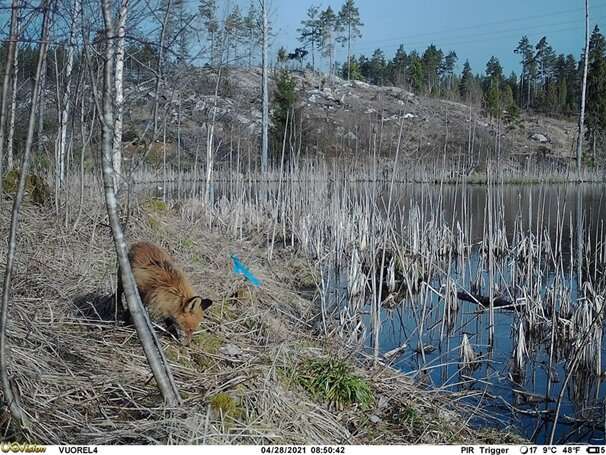 A red fox is inspecting an artificial nest containing eggs with an aversive agent. Credit: University of Turku

Researchers used artificial nests to test two methods for reducing the nest predation of vulnerable and endangered ground-nesting birds. The study showed that red foxes can be more easily deceived into not eating bird eggs than raccoon dogs. The methods could be used alongside hunting and offer an alternative, non-lethal solution for creating protection for vulnerable prey.

Predator control is a common challenge in areas where the prey populations, such as ground-nesting waterfowl, cannot withstand the impact of the increased number of predators. For example, in areas that lack apex predators, the red fox population can be overly large for its native habitat. In addition, red fox is an invasive species in some parts of world. In both cases, the foxes can cause a decline in the prey species’ populations.

Predator control by hunting can be laborious and cannot be carried out everywhere or at any time, for example, during the birds’ nesting season. Therefore, there is a global need for alternative, non-lethal methods.

In an extensive field experiment conducted in southern Finland, the international team of researchers tested two methods that could reduce nest predation and therefore protect the prey species.

In the first treatment sites, the researchers spread waterfowl odor in wetland areas. With the chemical camouflage, a new method successfully tested in Australia and New Zealand, the researchers studied whether great amounts of prey odor in the area prevents predators from finding the artificial bird nests. 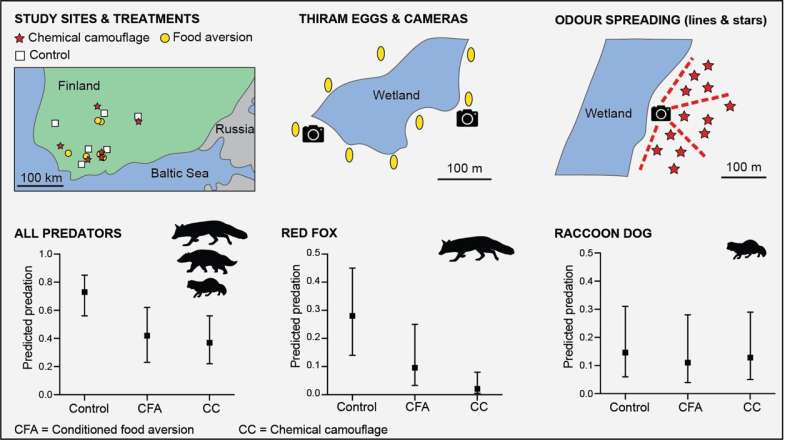 The images above show the location of the study sites and the methods as well as examples of how the eggs and odour were spread and the game cameras positioned in the landscape. Below are the results for all predators and individually for red foxes and raccoon dogs where the vertical axis describes the predation probability of the artificial nests with the different methods. Credit: University of Turku

In other areas, the researchers used eggs containing an aversive agent causing nausea with the goal of conditioning the predators to believe that the bird eggs were inedible. The researchers also used control sites which they visited as frequently as the treatment sites for controlling a potential disturbance effect.

The study showed that especially the chemical camouflage decreased the predation of the artificial waterfowl nests by red foxes, but a similar effect was not observed with raccoon dogs, a harmful invasive species to Finland.

“Red foxes might rely more on their sense of smell to find bird nests, while the raccoon dog might find the nests by happenstance when they move in the area,” says Senior Researcher Vesa Selonen from the University of Turku, Finland.

The results were similar but less clear with the eggs containing an aversive agent.

“Nevertheless, our results are interesting as they indicate that these methods could reduce the nest predation of vulnerable and endangered waterfowl species. Next, it is necessary to study whether the results we observed with the artificial nests can also lead to the preservation of real bird nests and through it to a larger number of young birds,” says Professor of Ecology Toni Laaksonen from the University of Turku.

The research is published in Biological Conservation.