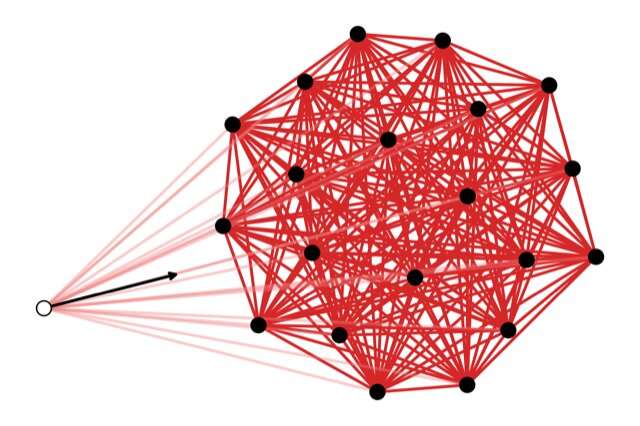 In quantum physics, Fermi’s golden rule, also known as the golden rule of time-dependent perturbation theory, is a formula that can be used to calculate the rate at which an initial quantum state transitions into a final state, which is composed of a continuum of states (a so-called “bath”). This valuable equation has been applied to numerous physics problems, particularly those for which it is important to consider how systems respond to imposed perturbations and settle into stationary states over time.

Fermi’s golden rule specifically applies to instances in which an initial quantum state is weakly coupled to a continuum of other final states, which overlap its energy. Researchers at the Centro Brasileiro de Pesquisas Físicas, Princeton University, and Universität zu Köln have recently set out to investigate what happens when a quantum state is instead coupled to a set of discrete final states with a nonzero mean level spacing, as observed in recent many-body physics studies.

“The decay of a quantum state into some continuum of final states (i.e., a ‘bath’) is commonly associated with incoherent decay processes, as described by Fermi’s golden rule,” Tobias Micklitz, one of the researchers who carried out the study, told Phys.org. “A standard example for this is an excited atom emitting a photon into an infinite vacuum. Current date experimentations, on the other hand, routinely realize composite systems involving quantum states coupled to effectively finite size reservoirs that are composed of discrete sets of final states, rather than a continuum.”

“Our starting point was to consider generic finite size reservoirs lacking any specific symmetries,” Micklitz explained. “Such systems usually show quantum chaotic behavior and can be modeled by random matrices for which powerful analytical tools are available.”

To carry out their analyses, Micklitz and his colleagues used a combination of effective matrix integral techniques, which are commonly used in studies applying random matrix theory, a theory that summarizes the different properties of matrices with entries drawn randomly from different probability distributions. To benchmark the results of their analyses, they then used exact diagonalization, a powerful numerical technique often used by physicists to study individual quantum many-body systems.

“Initially we hadn’t expected the decay into a finite size reservoir to be described by such a complex time-dependence,” Micklitz said. “We found that the probability to reside in the weakly coupled level shows a non-motonous time-dependence with initial decay, followed by a raise, before saturating to a constant value. The temporal profile follows (in a large regime of parameters) the ‘spectral form factor,’ a well-studied object in the quantum chaos community, which encodes information on energy level correlations in the reservoir. This makes much sense in retrospective.”

Now published in Physical Review Letters, the recent study by this team of researchers offers a fully analytic description of a crucial and fundamental physics problem. More specifically, it offers a connection between the problem of how a quantum state decays into a set of discrete final states to the statistics associated with energy levels and wave functions in chaotic quantum systems.

“We relate the temporal profile of the probability of residence to the spectral form factor, and the ratio of the probability’s minimum and saturation values to the statistics of reservoir-eigenfunctions,” Micklitz added. “Our work focuses on a fundamental but also rather elementary example of relaxation into a finite size reservoir. We are now trying to address more complex systems, such as ensembles of spins coupled to a quantum dot. Hopefully, progress can be made using similar methods as those employed in our recent paper.”