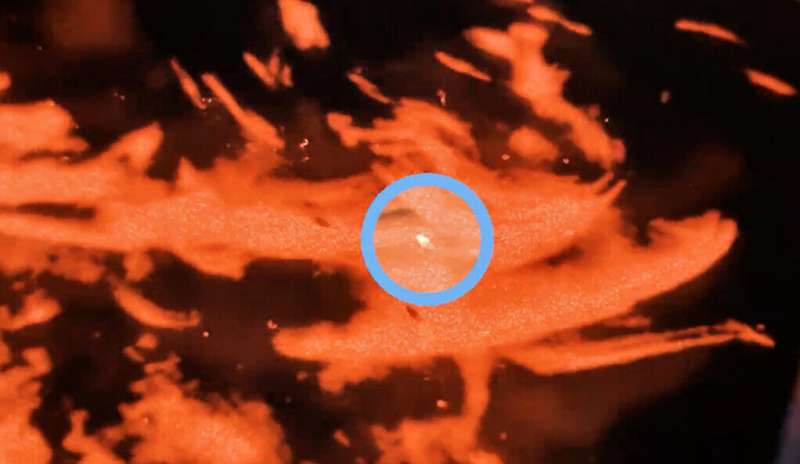 In a new study, Yale researchers genetically modified fly antennae to detect light and then watched how the flies responded to changes in fictive odor packets of light. The research revealed new insights into how flies are able to independently detect the motion of odor packets. Credit: Yale University

The survival of all animals and insects, from wolves to bees, depends upon their ability to find the source of odors, which is a challenge when wind disperses and obscures their source. Past research has shown that animals and insects navigate their way to these targets by sensing the intensity of odors and tracking back in the opposite direction of the wind.

However, following wind alone can lead them astray, for the same reason that smoke emanating from a chimney disperses and its trail does not always lead directly back to its source. A team of Yale scientists, led by Thierry Emonet and Damon Clark, wondered whether flies had a different trick between their two antennae: Could they detect the motion of odor packets, independent of the wind?

For a new study, the Emonet and Clark labs combined their expertise in olfactory navigation and motion detection to design experiments to test this hypothesis. They discovered that in fact, flies can sense the direction of moving odor packets themselves, not just the wind.

To make this discovery, they genetically modified fly antennae to detect light, then created fictive odor packets out of light and watched how the flies responded to these signals in both windless and windy environments. They found that the fly antennae worked in tandem to recognize the direction that odor packets were moving, allowing flies to adjust course based on signals from odor packets alone. The paper was published Nov. 9 in the journal Nature.

This knowledge will not only aid agriculture (how bees find flowers) and public health (how mosquitoes find people), but also the development of robots that can sense dangers in the environment (where landmines are buried), the researchers say.

The project was made possible by shared lab space in the QBio Institute, where Nirag Kadakia, a postdoctoral fellow in the Emonet lab, combined two separate experiments: a system to visualize how flies navigate (developed by Mahmut Demir in the Emonet lab) and a projector system to deliver optical stimuli to flies (developed by Brian DeAngelis in the Clark lab).