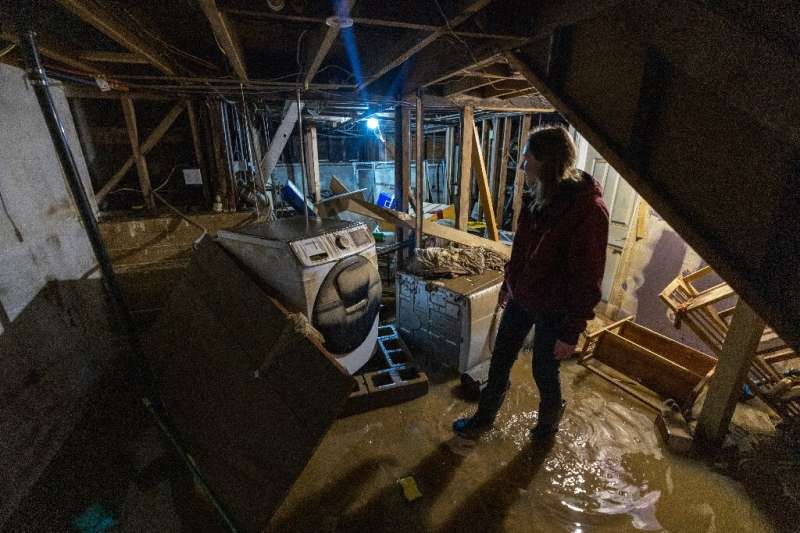 Amberlee Galvin looks at the damage to her house from the third flood in two weeks in the California town of Felton.

Using a plastic broom, Camilla Shaffer scrapes at the thick layer of mud caking her yard—it’s the third time in two weeks that her house has been flooded thanks to the string of storms that have hit California in rapid succession.

“I’m so angry, it just makes me want to cry,” said Shaffer, a 59-year-old Briton wearing boots covered in muck.

It was only a few days ago that she cleaned up her porch from the last storm, and now she has to start all over again. Upstairs her belongings are safe but the furniture of her art studio on the ground floor is ruined.

In Felton, a town of 4,500 people tucked away in mountains and sequoia trees on the coast south of San Francisco, folks thought they knew the San Lorenzo River. It had burst its banks a few times in the past decade.

But this time was different, with locals saying they had never seen the waterway flood so wildly or so often.

Since Christmas, no fewer than eight storms have slammed California, fueled by weather phenomena known as atmospheric rivers—long plumes of vapor up high in the atmosphere and stemming from the tropics. They carry huge amounts of water.

So in Felton, several parts of town woke up under water on New Year’s Day. Then again last Monday. Then yet again on Saturday.

“Three times in two weeks, that’s crazy,” said Kevin Smith, a strapping 35-year-old who had recently purchased his parents’ house near the river. In the garage, the high-water mark from the flooding last week almost reaches his head.

“Monday was the worst flood in 40 years,” said Smith, who restores old cars for a living. Others in town share that assessment. 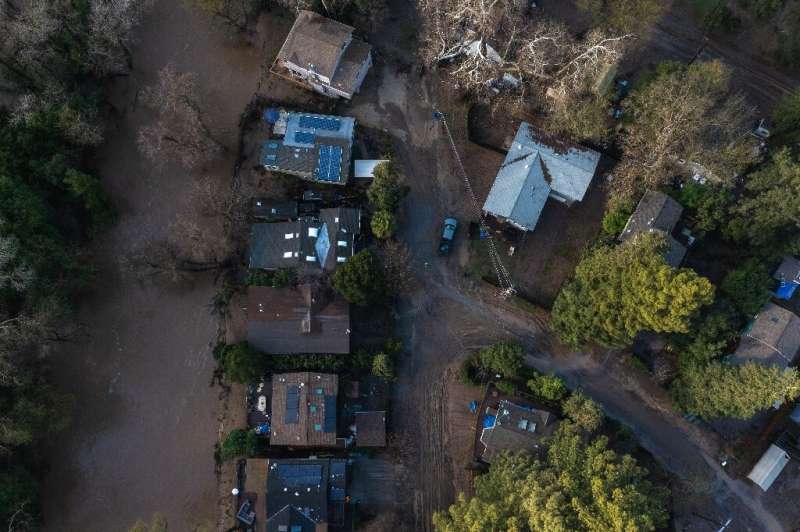 An aerial view of Felton, California, after it was flooded by the San Lorenzo River.

It is hard to establish a direct link between these storms, which have claimed 19 lives in the state, and global warming. But scientists say climate change is making extreme weather events such as these winter storms wetter and wilder.

And in Felton, where sofas, garbage bins and other detritus lie haphazardly in flooded streets, people fear this violent weather augurs poorly for the future.

“I hope this isn’t the new normal,” sighed Melissa Foley, pushing a wheelbarrow full of cleaning kits donated by the Red Cross, which she distributes to her neighbors.

Like many who live along the river, this 44-year-old environmental scientist lives in a multi-level house she says is built to withstand “a 100-year flood.” She took her stuff upstairs as the river rose.

“We know what we signed up for when we bought here,” said Foley. She said she loves living surrounded by the forest too much to consider moving elsewhere.

But for those less fortunate, the flooding of the past few days has been truly catastrophic.

Caught between the river and another stream that overflowed its banks, Amberlee Galvin and her mother watched the water rise and rise in their house.

“Within 10 minutes it had flooded completely to the ceiling. It happened crazy fast,” the 23-year-old said. “We had to get canoed out by a neighbor.”

Her house is still a stinking mess. The ground floor is flooded with toxic water, as the river carried with it gasoline, sewage and chemicals. An interior wall suffered major damage.

The house is in such bad shape that authorities have declared it uninhabitable for now, while a more thorough assessment is pending.

“The insurance doesn’t want to cover the damage,” said Galvin. “If we can’t live here anymore, we might have to move somewhere real cheap, like Texas.”