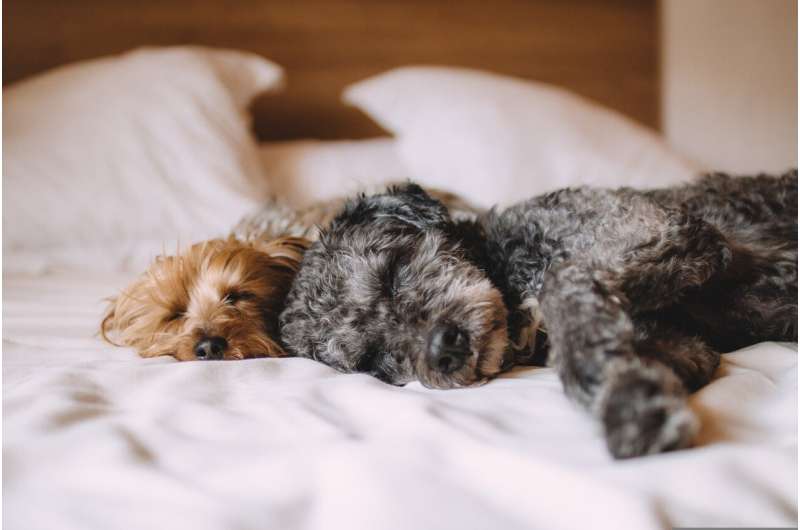 Newly discovered genetic commonalities and differences among the most prevalent types of canine soft tissue sarcomas, a common and potentially deadly tumor, could pave the way for more accurate diagnosis and better treatments in the future.

Using next-generation sequencing techniques and computation approaches, a team of researchers and veterinarians at Washington State University examined the genetic makeup of the three most common subtypes of the tumor and identified several therapeutic targets that might form the basis of new treatments. They detailed their findings in a study published in the journal PLOS ONE.

“The different subtypes of soft tissue sarcomas can look so similar even trained pathologists have trouble distinguishing one from another. Yet it turns out they are not all the same—they are a very diverse group of cancers,” said Eric Shelden, an associate professor in WSU’s School of Molecular Biosciences and the study’s corresponding author.

As many as 95,000 dogs in the United States are diagnosed with this cancer every year, and 20% to 30% die from the disease. There are several subtypes of sarcomas, however, because they present similar characteristics and are difficult to diagnose, they are treated similarly and often unsuccessfully.

Rance Sellon, a veterinary oncologist at WSU and a co-author of the study, said the study’s findings suggest a “one-size-fits-all” treatment approach may no longer be appropriate for patients, and clinicians may need to work more closely with veterinary pathologists to identify tumor subtypes for more accurate diagnosis and to investigate and identify more effective treatment options.

“From a clinical standpoint, the findings of this study hint that perhaps our view of this tumor type should change, and we should be looking to make better distinctions among the various subtypes, ultimately with the goal of better defining treatment and prognosis,” he said.

Previous studies have examined the potential causes of soft tissue sarcomas and looked at the genetic markers to identify soft tissue sarcoma subtypes. The WSU study, though, was the first to examine gene expression patterns in canine soft tissue sarcomas using RNA-sequence analysis of tumor samples to differentiate between the tumors, understand the biology that drives their behavior and identify candidates for drug therapies.

“We looked at thousands of genes and their expression patterns at once, and then we tried to unravel computationally whether there are differences between the different tumor types, and there are,” Shelden said. “While it will probably take some years before the effect of this study is actually felt in a clinical setting, the hope is that this will make people realize that you shouldn’t just treat these tumors similarly because they are in fact biologically different.”

Shelden said follow-up studies are needed to validate the findings and identify drugs better suited to treat the different tumors.

Sellon estimated WSU’s Veterinary Teaching Hospital sees one or two dogs a week with soft tissue sarcomas. He noted the tumors can be difficult to treat, and the prognosis varies based on a number of variables, such as the size and grade of the tumor. Treatment typically involves surgical removal of the tumor followed by radiation therapy.

“A surgical cure can be difficult, or impossible, depending on tumor size and location as these tumors are notorious for locally invasive behavior that can make it difficult for acquisition of ‘clean’ surgical margins—margins with an adequate amount of normal tissue surrounding the edges of the tumor,” Sellon said. “Radiation therapy can be effective to treat residual disease, but for some dogs, recurrence still can be seen after surgery and radiation therapy.”

Steep Drops in Bitcoin, Ether Cause Over $250M in Futures Losses

California and the West broil in record heat wave