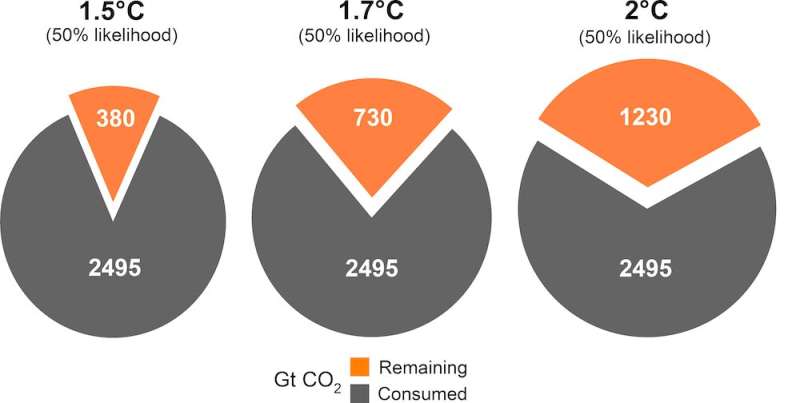 Global carbon dioxide emissions from all human activities remain at record highs in 2022, and fossil fuel emissions have risen above pre-pandemic levels, according to a new analysis by an international body of scientists.

The analysis, by the Global Carbon Project, calculates Earth’s “carbon budget”, which is how much CO₂ humans have released, and how much has been removed from the atmosphere by the oceans and land ecosystems. From there, we calculate how much carbon can still be emitted into the atmosphere before Earth exceeds the crucial 1.5℃ global warming threshold.

This year, the world is projected to emit 40.6 billion tons of CO₂ from all human activities, leaving 380 billion tons of CO₂ as the remaining carbon budget. This amount of emissions is disastrous for the climate—at current levels, there is a 50% chance the planet will reach the 1.5℃ global average temperature rise in just nine years.

We’ve seen significant progress towards decarbonization and emission reduction from some sectors and countries, particularly in renewable electricity generation. Yet, as world leaders gather for the COP27 climate change summit in Egypt this week, the overall global effort remains vastly insufficient.

Humanity must urgently cut global emissions if we are to retain any hope of averting the most catastrophic impacts of climate change.

Coal and oil emissions up, gas down, deforestation slowing

Based on preliminary data, we project that CO₂ emissions from coal, natural gas, oil, and cement use (fossil emissions) will increase by 1% in 2022 from 2021 levels, reaching 36.6 billion tons. This means 2022 fossil emissions will be at an all-time high, and slightly above the pre-pandemic levels of 36.3 billion tons in 2019.

So, in relative terms, the global growth in fossil CO₂ emissions is at least slowing down. 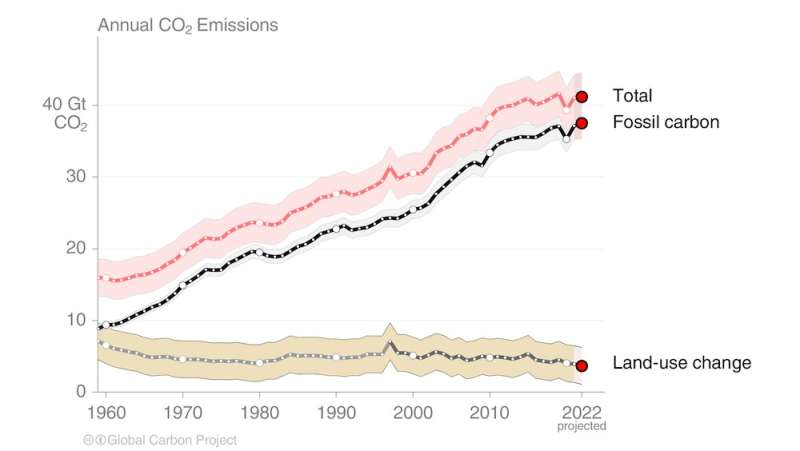 The growth in fossil emissions this year is largely due to higher oil and coal use—particularly oil, as the aviation industry is strongly bouncing back from the pandemic.

Coal emissions have also increased this year in response to higher natural gas prices and shortages in natural gas supply. Unexpectedly, there is the possibility that coal emissions this year will be higher than the historical peak in 2014.

While land-use change emissions remain high, we’ve seen a slight decline over the past two decades largely due to increased reforestation. Rates of deforestation worldwide, however, are still high.

Together, fossil fuel and land-use change are responsible for 40.6 billion tons of CO₂.

The US and India are responsible for the largest increases in CO₂ fossil emissions this year.

Meanwhile, CO₂ emissions from fossil fuel sources in China and the European Union are projected to decline this year by 0.9% and 0.8%, respectively.

China’s decline is mainly due to the nation’s continuing pandemic lockdowns, which have subdued economic activity. This includes a marked slowdown in the construction sector and its associated lower cement production. 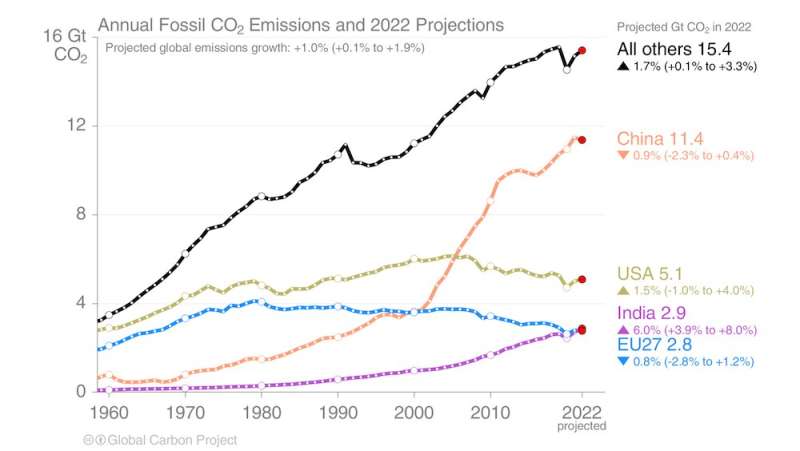 Global fossil CO₂ emissions from the top emitters and the rest of the world, with preliminary estimates for 2022 (GtCO₂ = billion tons of CO₂). Source: Friedlinsgtein et al. 2022; Global Carbon Project 2022.

Russia’s invasion of Ukraine is projected to lead to a 10% decline in the European Union’s CO₂ emissions from natural gas in 2022, as a result of supply shortages. The gas shortage has been partially replaced with greater coal consumption, leading to an increase of 6.7% in coal emissions in Europe.

The rest of the world accounts for 42% of global fossil CO₂ emissions, and this is expected to grow by 1.7% this year.

Indonesia, Brazil and the Democratic Republic of the Congo contribute 58% of global CO₂ emissions from net land-use change.

Natural carbon sinks get bigger, but feel the heat

Ocean and land act as CO₂ sinks. The ocean absorbs CO₂ as it dissolves in seawater. On land, plants absorb CO₂ and and build it into their trunks, branches, leaves and soils.

This makes ocean and land sinks a crucial part of regulating the global climate. Our data shows that on average, land and ocean sinks remove about half of all CO₂ emissions from human activities, acting like a 50% discount on climate change.

Despite this help from nature, the concentration of atmospheric CO₂ continues to climb. In 2022 it’ll reach a projected average of 417.2 parts per million. This is 51% above pre-industrial levels and higher than any time in the past 800,000 years.

Carbon sinks are getting larger because there is more CO₂ in the atmosphere for them to absorb. And yet, the impacts of climate change (such as overall warming, increased climate extremes, and changes in ocean circulation) have made land and ocean sinks, respectively, 17% and 4% smaller than they could have grown during 2012-2021.

There’s been significant progress this year in deployment of renewable energy, policy development, and commitments from governments and corporations to new, more ambitious climate mitigation targets.

We must urgently reach net-zero CO₂ emissions to keep global warming well below 2℃ this century. But humanity’s massive emissions in 2022 underscores the monumental and urgent task ahead.

Move on from Trump? Even GOP critics of the former president don’t see it.