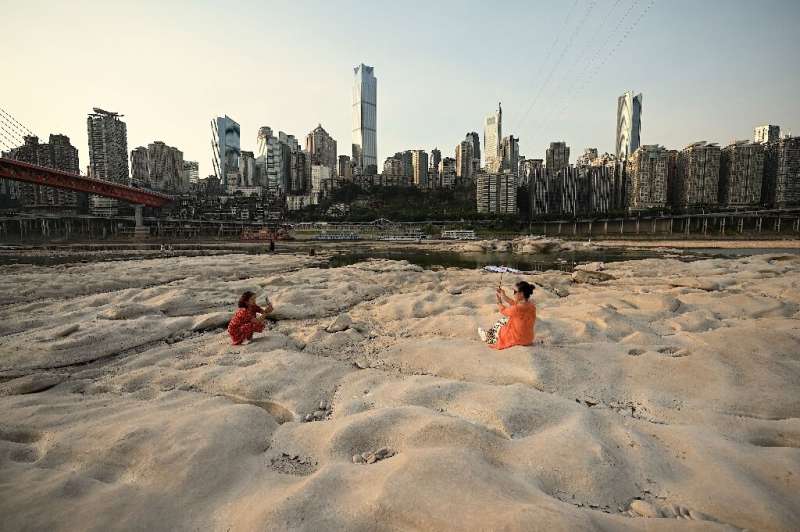 Southern China has recorded its longest continuous period of high temperatures since records began more than 60 years ago.

A crippling drought exacerbated by a record heatwave has spread across half of China and reached the normally frigid Tibetan Plateau, according to official data released ahead of more searing temperatures on Thursday.

The world’s second-largest economy has experienced over 70 days of heatwaves, flash floods and droughts—phenomena that scientists say are becoming more frequent and intense due to climate change.

Southern China has recorded its longest continuous period of high temperatures since records began more than 60 years ago, the agriculture ministry said this week.

Experts have said the intensity, scope and duration of the heatwave could make it one of the worst recorded in global history.

A chart from the National Climate Centre showed Wednesday that swathes of southern China—including the Tibetan Plateau—were experiencing “severe” to “extraordinary” drought conditions.

The worst-affected area—the Yangtze river basin, stretching from coastal Shanghai to Sichuan province in China’s southwest—is home to over 370 million people and contains several manufacturing hubs including the megacity of Chongqing.

The China Meteorological Administration predicted continued high temperatures of up to 40 degrees Celsius (104 degrees Fahrenheit) in Chongqing and the provinces of Sichuan and Zhejiang Thursday.

But some regions gained relief from the heatwave. Parts of southwestern Sichuan were battered by heavy rains overnight, causing the evacuation of almost 30,000 people, state broadcaster CCTV reported.

And in the southeast, Typhoon Ma-on made landfall in coastal Guangdong province and Hong Kong Thursday morning.

“High temperatures have basically been alleviated in the regions of south China, Jiangxi and Anhui,” the meteorological administration said.

“But high temperatures will continue for the next three days in regions including the Sichuan basin and provinces surrounding Shanghai.” 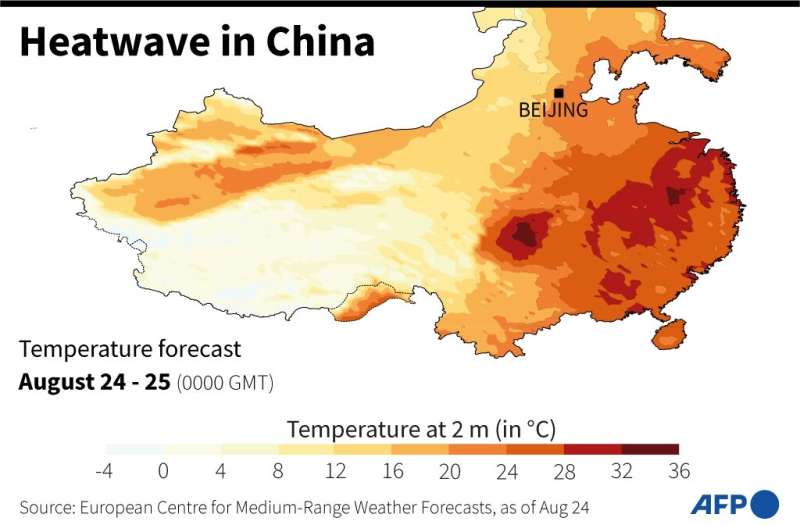 China produces more than 95 percent of the rice, wheat and maize it consumes, but a reduced harvest could mean increased demand for imports in the world’s most populous country—putting further pressure on global supplies already strained by the conflict in Ukraine.

These regions have also been battling wildfires since last week, exacerbated by high temperatures and water scarcity.

Livestock owners have fared badly, with Chongqing authorities pledging emergency measures to protect pig farms and a Sichuan farmer’s tearful plea going viral after she said all her chickens had died due to the heatwave and power cuts.

Some Chongqing residents complained on social media about queueing for hours in sweltering heat for compulsory mass testing required in the wake of a COVID outbreak.

In parts of Sichuan and Chongqing, locals seeking cooler temperatures have taken to sleeping in car parks and subway stations due to daily power cuts.

Temperatures as high as 45 degrees Celsius (113 Fahrenheit) have led multiple Chinese provinces to impose industrial power cuts, as cities struggle to cope with a surge in demand for electricity.

Record low water levels on the Yangtze River have also put pressure on the region’s hydropower generators, with the National Energy Administration pledging Wednesday to make up the shortfall by ramping up coal production.

These mice grow bigger on the rainier sides of mountains: It might be a new rule of nature