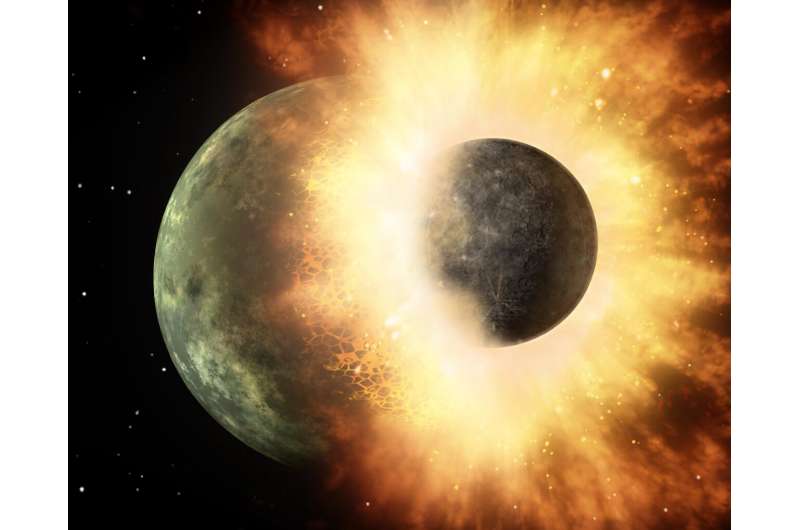 There are several theories about how Earth and its moon were formed, most involving a giant impact. Now scientists at the University of Leeds and the University of Chicago have analyzed the dynamics of fluids and electrically conducting fluids and concluded that Earth must have been magnetized either before the impact or as a result of it.

They claim this could help to narrow down the theories of the Earth-moon formation and inform future research into what really happened. Their work is published in Proceedings of the National Academy of Sciences.

Professor David Hughes, an applied mathematician in the School of Mathematics at the University of Leeds, said, “Our new idea is to point out that our theoretical understanding of the Earth’s magnetic field today can actually tell us something about the very formation of the Earth-moon system. At first glance, this seems somewhat surprising, and previous theories had not recognized this potentially important connection.”

This new assessment is based on the resilience of Earth’s magnetic field, which is maintained by a rotating and electrically conducting fluid in the outer core, known as a geodynamo.

Professor Fausto Cattaneo, an astrophysicist at the University of Chicago, said, “A peculiar property of the Earth’s dynamo is that it can maintain a strong magnetic field but not amplify a weak one.”

The scientists therefore concluded that if Earth’s field were to get switched off, or even reduced to a very small level, it would not have the capability to kick in again.

“It is this remarkable feature that allows us to make deductions about the history of the early Earth; including, possibly, how the moon was formed,” added Professor Cattaneo.

Professor Hughes added, “And if that is true, then you have to think, where did the Earth’s magnetic field come from in the first place? Our hypothesis is that it got to this peculiar state way back at the beginning, either pre-impact or as an immediate result of the impact. Either way, any realistic model of the formation of the Earth–moon system must include magnetic field evolution. ”

Biden froze out China’s ambassador. He may regret that.

Bitcoin and Ether Steady Ahead of Fed Decision