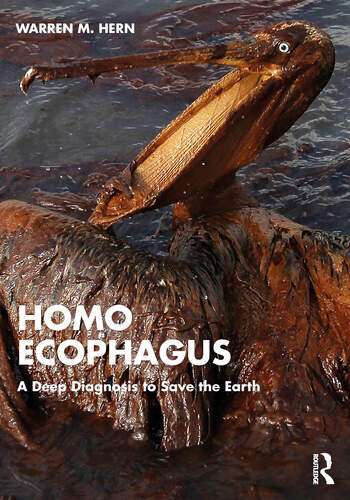 “At the moment,” writes Warren Hern, “we are the most misnamed species on the planet: Homo sapiens sapiens—’wise, wise man.’ Not.”

Hern, 84, physician, long-time abortion-rights advocate and adjunct professor of anthropology at the University of Colorado Boulder, thinks the name he coined for his new book provides a much more accurate description of humanity in the 21st century.

“I propose that the new scientific name of the human species be Homo ecophagus … ‘the man who devours the ecosystem,'” he writes in “Homo Ecophagus: A Deep Diagnosis to Save the Earth” (Routledge, 2022). “Homo ecophagus is a rapacious, ubiquitous, predatory, omni-ecophagic species that is a malignant epiecopathologic process engaged in the conversion of all plant, animal, organic and inorganic planetary material into human biomass or its adaptive adjuncts and support systems.”

Hern traces the roots of the book all the way back to 1952, when he was working as a 14-year-old gravedigger in Englewood, south of Denver.

“I was standing on the hill, doing my thing and looking out north of the cemetery. Something was wrong. All I could see was the Capitol and the (Montgomery) Ward building through the brown cloud” of smog, he recalls.

Throughout his long and varied career, from his Peace Corps work in Brazil to public health work in Washington, D.C., graduate school in North Carolina and medical school at CU, he slowly came to see humanity’s unfettered population growth and voracious demand for resources as a kind of global plague, an affliction that is mindlessly, inexorably killing its host, and thus, itself.

“Maybe we are not god’s gift to creation, the flower of the universe,” Hern muses. “Maybe we are something much, much worse: a malignant process on the Earth.”

Homo Ecophagus is wide-ranging, deeply researched, full of citations—not to mention some lovely color photographs—impassioned and, despite its stark thesis, persuasive.

The first third of the book serves as a kind of mini-autobiography and roadmap to Hern’s eventual identification of what he sees as a truly existential problem. In the second third, he describes example after example of the kind of destruction being wrought on the planet from pole to pole.

Finally, he renders his grim diagnosis: humanity is a cancer, and that’s neither hyperbole, metaphor nor analogy, he argues. Hern notes, for example, that cities, like cancer:

Citing several further similarities, he concludes that, “Human communities and human activities in general are ecophagic: they devour the ecosystem.”

“Rapid, uncontrolled growth is the sine qua non of cancer. As long as the human population is growing at all, there is no hope of solving these major ecological problems,” he says. “All the rest is secondary stuff.”

He notes that while the rate of global population growth has dropped from about 2% a year in the mid-20th century to 1% per year in the third decade of the 21st century, even at half the rate, humanity continues to grow along a “logistic, or asymptotic curve, which is the same growth curve seen in malignancies” and that (italics in original) “the declining growth rate of cancer occurs just before death of the host organism.”

“We are conducting the Anthropocene Extinction Event, and we are on our way to becoming casualties of it. Soon,” he writes. “Is that our goal?”

What, then, must we do? Hern admits he is not optimistic.

“Speaking as a physician, I would say the prognosis is not good, at least for the biosphere and the web of life as we know it, and that means extinction for us,” he writes.

But he notes that there is one key difference between humanity and cancer: “We can think and decide not to be cancer,” he says. “Right now, we are choosing extinction. But we can change what we are doing and no longer be a cancer on the planet.”

In keeping with his long-time advocacy for reproductive choice and population control, Hern suggests those concerned about human destruction of the planet vote for candidates who “don’t force women to have babies they don’t want,” who promote an “efficient economy based on good ecological principles, resource conservation instead of the next guy who wants to drill for oil in national parks” and take climate change seriously.

“We have choices to make,” he says. “We can choose to change what we are doing and not be a cancer on the planet, stop changing the biosphere irreversibly. But the longer we wait, the harder that choice is to make.”

DeSantis hits back at Trump ahead of 2024 announcement

Mauna Loa summit closed until further notice due to