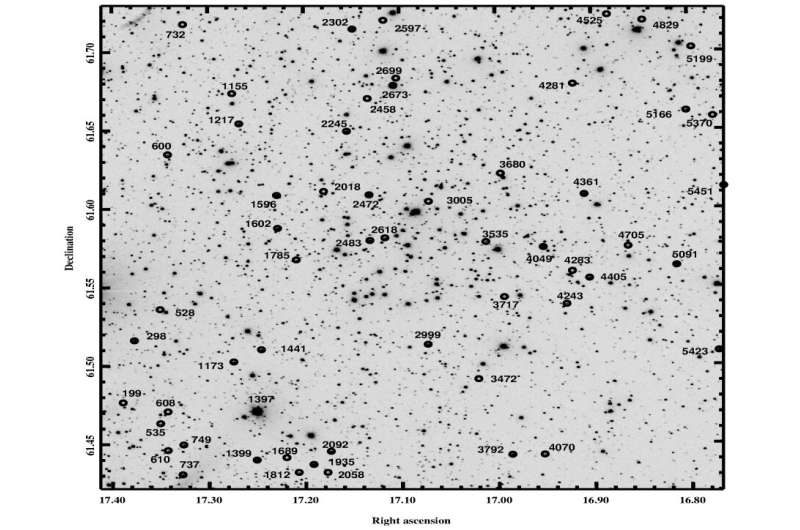 The finding chart for 57 periodic variables detected in NGC 381 region. The variable stars are marked by the circle and labeled with star IDs. The right ascension and declination are given in degrees. Credit: Maurya et al., 2022.

Astronomers from the Aryabhatta Research Institute of observational sciencES (ARIES) and from the Physical Research Laboratory in India report the detection of 57 variable stars in the field of the open cluster NGC 381. The discovery was detailed in a paper published December 19 on the arXiv preprint server.

Open clusters (OCs), formed from the same giant molecular cloud, are groups of stars loosely gravitationally bound to each other. So far, more than 1,000 of them have been discovered in the Milky Way, and scientists are still looking for more, hoping to find a variety of these stellar groupings. Expanding the list of known galactic OCs and studying them in detail could be crucial for improving our understanding of the formation and evolution of our galaxy.

Detecting and studying variable stars, especially in OC environments, could offer important hints into aspects of stellar structure and evolution. It could be also helpful in order to advance our knowledge about the distance scale of the universe.

Located some 3,700 light years away in the constellation of Cassiopeia, NGC 381 (also known as Collinder 10) is an intermediate-age (about 447 million years old) sparse open cluster with a radius of some 15 light years and a mass of about 32.4 solar masses. Although several studies of NGC 381 have been conducted, still very little is known about its variable stars content.

That is why a team of astronomers led by Jayanand Maurya of ARIES performed the first variability study of NGC 381 and its surroundings. For this purpose they employed the 1.3-m Devasthal Fast Optical Telescope (DFOT) in India.

“We extensively observed the open cluster region NGC 381 in V and I bands for the variability study. The region was observed using the 1.3-m DFOT telescope equipped with 2k×2k CCD having a large field of view of ∼ 18′ × 18′ suitable for variability search. The data were collected on 27 nights over a span of more than one year from October 1, 2017 to January 14, 2019,” the researchers explained.

As a result, the team identified a total of 57 periodic variable stars in the field of NGC 381 and five of them turned out to be cluster members. The astronomers classified these variables based on the shape of their light curves, period, amplitude, and location on the Hertzsprung-Russell (HR) diagrams.

According to the study, 10 out of the 57 identified variables are eclipsing binaries—eight of the W UMa type (EW) and two of the Algol type (EA). In the sample there are also 15 rotational variable stars and two pulsating variables—one of the Delta Scuti type and one of the Gamma Doradus type.

The remaining 30 variables could not be classified in any particular type; therefore, the researchers dubbed them “miscellaneous type variables.” The authors of the paper added that more time-series data complemented with a spectroscopic study are necessary in order to characterize these variables.