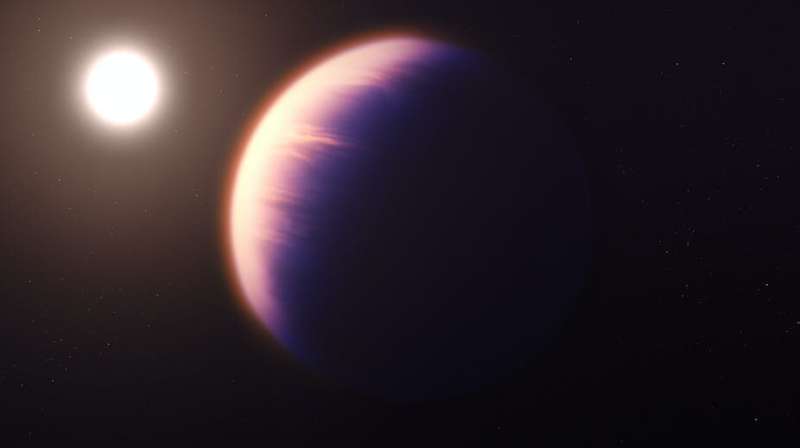 Artist impression of WASP b and its sta. Credit: NASA, ESA, CSA, and J. Olmsted (STScI)

Since the first planet orbiting a star other than the sun was discovered in 1995, we have realized that planets and planetary systems are more diverse than we ever imagined. Such distant worlds—exoplanets—give us the opportunity to study how planets behave in different situations. And learning about their atmospheres is a crucial piece of the puzzle.

NASA’s James Webb space telescope (JWST) is the largest telescope in space. Launched on Christmas Day 2021, it is the perfect tool for investigating these worlds. Now my colleagues and I have used the telescope for the first time to unveil the chemical make-up of an exoplanet. And the data, released in preprint form (meaning it has yet to be published in a peer-reviewed journal), suggests some surprising results.

Gases within the atmosphere absorb some of the light—leaving fingerprints on the starlight in the form of a reduction in brightness at certain colors, or wavelengths. JWST is particularly suited to exoplanet atmosphere studies because it is an infrared telescope. Most of the gases that are in an atmosphere—such as water vapor and carbon dioxide—absorb infrared rather than visible light.

I am part of an international team of exoplanet scientists that has been using JSTW to study a roughly Jupiter-sized planet called WASP-39b. Unlike Jupiter, however, this world takes only a few days to orbit its star, so it is being cooked—reaching temperatures exceeding 827°C. This gives us the perfect opportunity to explore how a planetary atmosphere behaves in extreme temperature conditions.

We used JWST to recover the most complete spectrum yet of this fascinating planet. In fact, our work represents the first chemical inventory of the planet’s atmosphere. 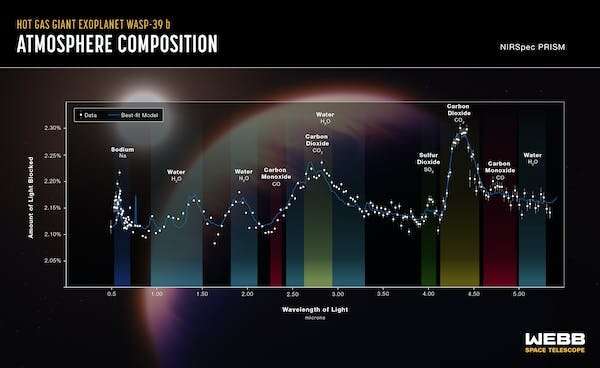 One of four separate measurements. Each bump corresponds to a different absorbing gas in the atmosphere. Credit: NASA, ESA, CSA, Joseph Olmsted (STScI)

We already knew that most of this large planet’s atmosphere had to be a mixture of hydrogen and helium—the lightest and most abundant gases in the universe. And the Hubble telescope has previously detected water vapor, sodium and potassium there.

Now, we’ve been able to confirm our detection and produce a measurement of the amount of water vapor. The data also suggests there are other gases including carbon dioxide, carbon monoxide, and unexpectedly, sulfur dioxide.

Having measurements of how much of each of these gases is present in the atmosphere means we can estimate the relative amounts of the elements that make up the gases—hydrogen, oxygen, carbon and sulfur. Planets are formed in a disc of dust and gas around a young star, and we expect different amounts of these elements to be available to a baby planet at different distances from the star.

WASP-39b appears to have a relatively low amount of carbon relative to oxygen, indicating it probably formed at a greater distance from the star where it could have easily absorbed water ice from the disc (boosting its oxygen), compared with its current very close orbit. If this planet has migrated, it could help us develop our theories about planet formation, and would support the idea that the giant planets in our Solar System also did a fair bit of moving and shaking early on.

The amount of sulfur we detected relative to oxygen is quite high for WASP-39b. We’d expect sulfur in a young planetary system to be more concentrated in bits of rock and rubble than as an atmospheric gas. So this indicates that WASP-39b might have undergone an unusual amount of collisions with sulfur-containing chunks of rock. Some of that sulfur would be released as gas. 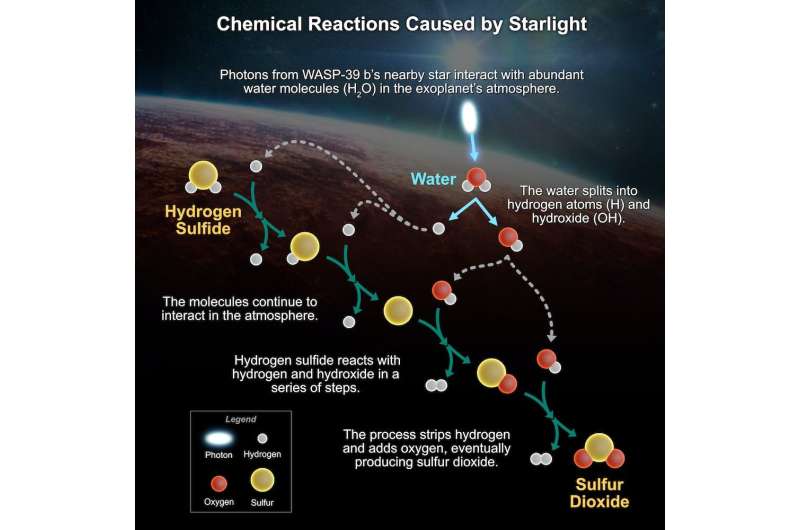 In a planet’s atmosphere, different chemicals react with each other at different rates depending on how hot it is. Usually, these settle into an equilibrium state, with the total amounts of each gas remaining stable as the reactions balance each other. We managed to predict what gases we would see in WASP-39b’s atmosphere for a range of starting points. But none of them came up with sulfur dioxide, instead expecting any sulfur to be locked up in a different gas, hydrogen sulfide.

The missing piece of the chemical jigsaw puzzle was a process called photochemistry. This is when the rates of certain chemical reactions are driven by energy from photons—packets of light—coming from the star, rather than by the temperature of the atmosphere. Because WASP-39b is so hot, and reactions generally speed up at higher temperatures, we didn’t expect photochemistry to be quite as important as it has turned out to be.

The data suggests that water vapor in the atmosphere is split apart by light into oxygen and hydrogen. These products would then react with the gas hydrogen sulfide, eventually stripping away the hydrogen and replacing it with oxygen to form sulfur dioxide.

What’s next for JWST?

Photochemistry is even more important on cooler planets that may be habitable—the ozone layer on our own planet is formed via a photochemical process. JWST will be observing the rocky worlds in the Trappist-1 system during its first year of operation. Some of these measurements have already been made—and all of these planets have temperatures more similar to Earth’s.

Some may even have the right temperature to have liquid water on the surface, and potentially life. Having a good understanding of how photochemistry influences atmospheric composition is going to be critical for interpreting the Webb telescope observations of the Trappist-1 system. This is especially important since an apparent chemical imbalance in an atmosphere might hint at the presence of life, so we need to be aware of other possible explanations for this.

The WASP-39b chemical inventory has shown us just how powerful a tool JWST is. We’re at the start of a very exciting era in exoplanet science, so stay tuned.

U.S. concerned Russia could use chemical weapons in Ukraine

Eight billion people: How evolution made it happen