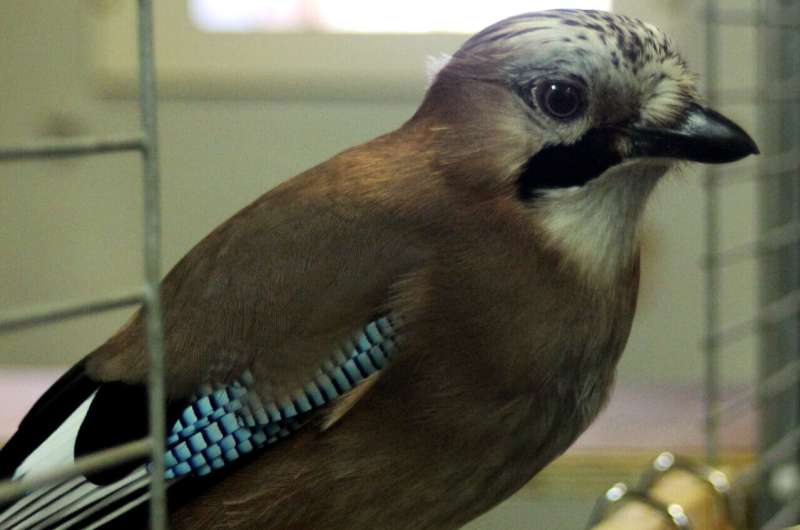 One of the worst performers, ‘Homer’, could only wait a maximum of 20 seconds for a better snack. Credit: Alex Schnell

A study has found that Eurasian jays can pass a version of the ‘marshmallow test’—and those with the greatest self-control also score the highest on intelligence tests.

This is the first evidence of a link between self-control and intelligence in birds.

Self-control—the ability to resist temptation in favor of a better but delayed reward—is a vital skill that underpins effective decision-making and future planning.

Jays are members of the corvid family, often nicknamed the ‘feathered apes’ because they rival non-human primates in their cognitive abilities. Corvids hide, or ‘cache’, their food to save it for later. In other words, they need to delay immediate gratification to plan for future meals. The researchers think this may have driven the evolution of self-control in these birds.

The new results show that the link between intelligence and self-control exists across distantly related animal groups, suggesting it has evolved independently several times.

Of all the corvids, jays in particular are vulnerable to having their caches stolen by other birds. Self-control also enables them to wait for the right moment to hide their food without being seen or heard.

The results are published today in the journal Philosophical Transactions of the Royal Society B.

To test the self-control of ten Eurasian jays, Garrulus glandarius, researchers designed an experiment inspired by the 1972 Stanford Marshmallow test—in which children were offered a choice between one marshmallow immediately, or two if they waited for a period of time.

Instead of marshmallows, the jays were presented with mealworms, bread and cheese. Mealworms are a common favorite; bread and cheese come second but individuals vary in their preference for one over the other. 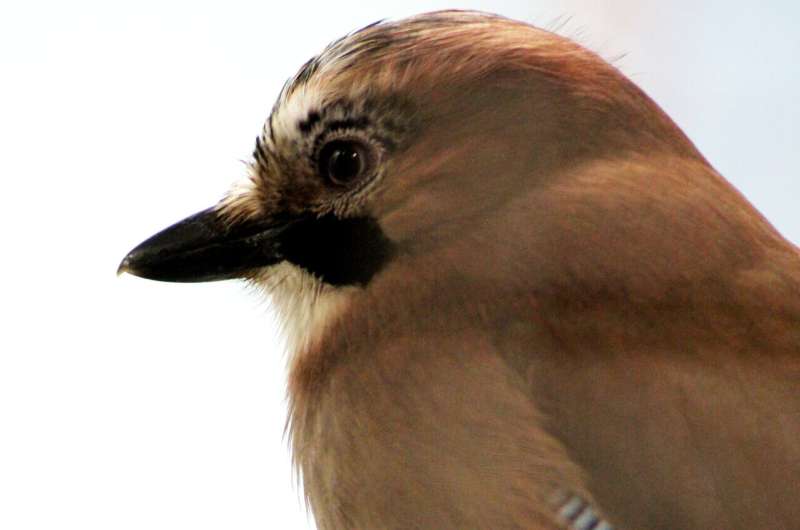 Top of the class was ‘JayLo’, who ignored a piece of cheese and waited five and a half minutes for a mealworm. Credit: Alex Schnell

The birds had to choose between bread or cheese—available immediately, and mealworm that they could see but could only get to after a delay, when a Perspex screen was raised. Could they delay immediate gratification and wait for their favorite food?

A range of delay times was tested, from five seconds to five and a half minutes, before the mealworm was made available if the bird had resisted the temptation to eat the bread or cheese.

All the birds in the experiment managed to wait for the worm, but some could wait much longer than others. Top of the class was ‘JayLo’, who ignored a piece of cheese and waited five and a half minutes for a mealworm. The worst performers, ‘Dolci’ and ‘Homer’, could only wait a maximum of 20 seconds.

“It’s just mind-boggling that some jays can wait so long for their favorite food. In multiple trials, I sat there watching JayLo ignore a piece of cheese for over five minutes—I was getting bored, but she was just patiently waiting for the worm,” said Dr. Alex Schnell at the University of Cambridge’s Department of Psychology, first author of the report.

The jays looked away from the bread or cheese when it was presented to them, as if to distract themselves from temptation. Similar behavior has been seen in chimpanzees and children.

The researchers also presented the jays with five cognitive tasks that are commonly used to measure general intelligence. The birds that performed better in these tasks also managed to wait longer for the mealworm reward. This suggests that self-control is linked with intelligence in jays.

“The birds’ performance varied across individuals—some did really well in all the tasks and others were mediocre. What was most interesting was that if a bird was good at one of the tasks, it was good at all of them—which suggests that a general intelligence factor underlies their performance,” said Schnell.

The jays also adjusted their self-control behavior according to the circumstances: in another experiment where the worm was visible but always out of reach, the jays always ate the immediately available bread or cheese. And the length of time they were willing to wait for the worm fell if it was pitted against their second most preferred food as the immediate treat, compared to their third. This flexibility shows that jays only delay gratification when it is warranted.

Research by other scientists has found that children taking the Stanford marshmallow test vary greatly in their self-control, and this ability is linked to their general intelligence. Children that can resist temptation for longer also get higher scores in a range of academic tasks.

Cardano Weighs on Crypto Majors After US Tech Stocks Plunge