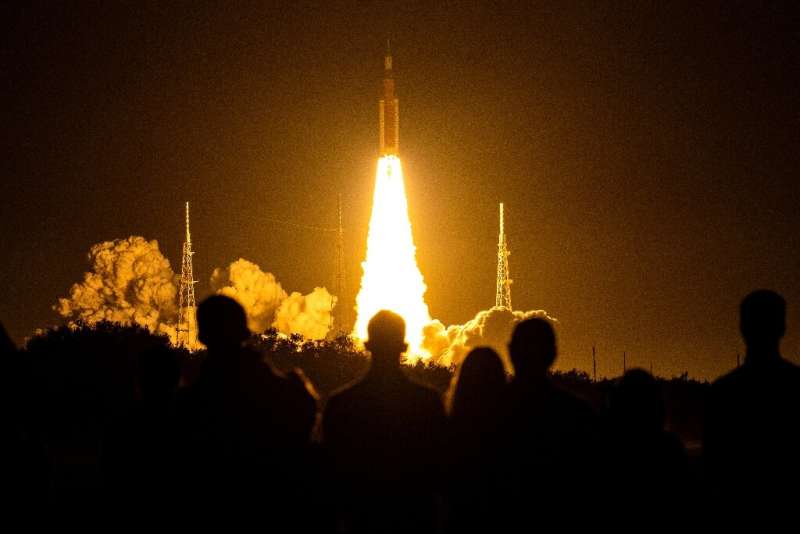 NASA’s Artemis 1 unmanned lunar rocket lifts off from Kennedy Space Center at the start of its 25-day lunar mission.

NASA launched the most powerful rocket ever built on a journey to the Moon on Wednesday, in a spectacular blaze of light and sound that marked the start of the space agency’s new flagship program, Artemis.

The 32-story tall Space Launch System (SLS) blasted off from the Kennedy Space Center in Florida at 01:47 am (0647 GMT), producing a record 8.8 million pounds (39 meganewtons) of thrust.

Fixed to the rocket’s top was the uncrewed Orion spaceship that will orbit Earth’s nearest neighbor, in a test run for later flights that should see the first woman and first person of color touch down on lunar soil by the mid-2020s.

About two hours after launch, NASA said the spacecraft was on its trajectory to the Moon, and later released the first images taken of Earth receding behind the craft.

“Now we are going back to the Moon, not just for the sake of going to the Moon, but to learn how to live on the Moon in order to prepare to send humans all the way to Mars,” NASA administrator Bill Nelson told a news conference after the launch.

“This is the next beginning, this is the Artemis generation,” added Nelson, who said he watched the launch from the roof of the rocket assembly building along with a group of astronauts.

America last sent astronauts to the Moon during the Apollo era, from 1969-1972.

This time it hopes to build a sustained presence—including a lunar space station—to help prepare for an eventual mission to Mars in the 2030s.

There were nervous moments as teams worked to overcome technical issues that ate into the two-hour launch window, which opened at 1:04 am.

First, engineers were forced to pause the flow of liquid hydrogen into the core stage Tuesday night because of a valve leak, but a team sent to the launch pad resolved the issue after about an hour, by tightening loose bolts.

Later, the space agency reported that a radar site monitoring the rocket’s flight path was experiencing problems due to a faulty ethernet switch, which had to be replaced.

It was third time lucky for NASA after two previous launch attempts were canceled for technical reasons. The launch was also delayed due to weather setbacks including Hurricane Ian, which battered Florida in late September. 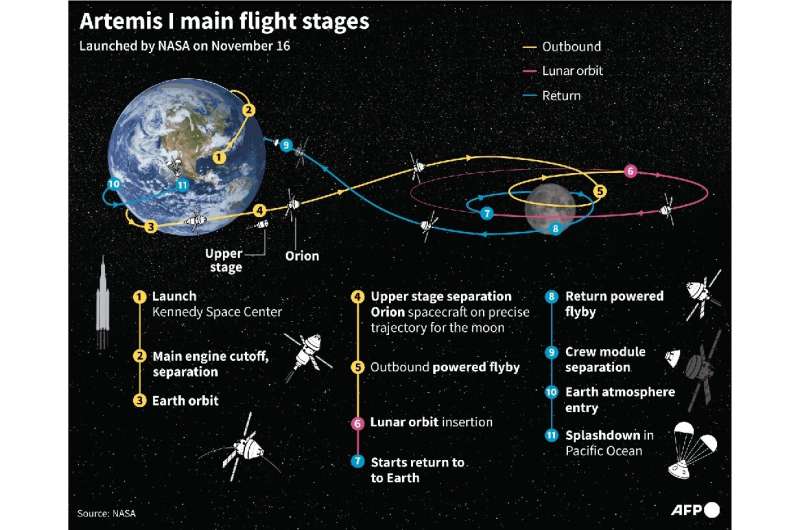 Schematic outline of the NASA’s Artemis I voyage, rescheduled for November 16.

About 100,000 people were expected to have gathered along the coast to witness the historic event.

Wearing an Artemis T-shirt, the 55-year-old told AFP tearfully: “This has been an experience I’ve looked forward to all my life.

“My first memory is my mother waking me up at two years old to watch the Moon landing and I’ve always wanted to see a launch ever since, and now I have.”

Kerry Warner, 59, a grandmother and semi-retired educator who lives in Florida, added the launch was “part of America and what America is all about.”

Far side of the Moon

The Orion crew capsule was lifted by two boosters and four powerful engines under the core stage, which detached after just a few minutes.

A final push from the upper stage set the capsule on its way to the Moon, though it will take several days to reach its destination. 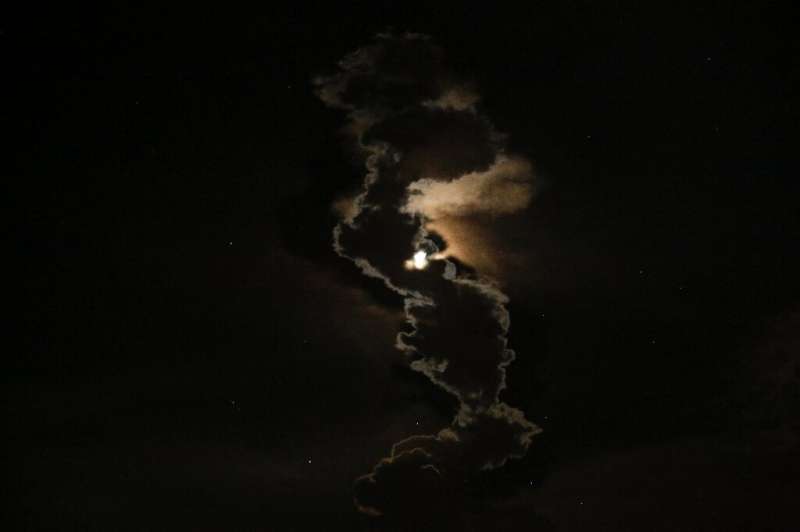 The smoke trail of the Artemis I is seen after lifting off from NASA’s Kennedy Space Center, in Titusville, Florida.

The upper stage will meanwhile release 10 CubeSats to carry out science experiments, including one that will unfurl a sail-powered by sunlight and perform asteroid reconnaissance work.

Rather than landing on the Moon, Orion will assume a distant orbit, venturing 40,000 miles (64,000 kilometers) beyond the far side—further than any other habitable spacecraft so far.

Finally, the spaceship will embark on the return leg of its journey. When passing through the atmosphere, the capsule’s heat shield will need to withstand a temperature half as hot as the Sun’s surface. 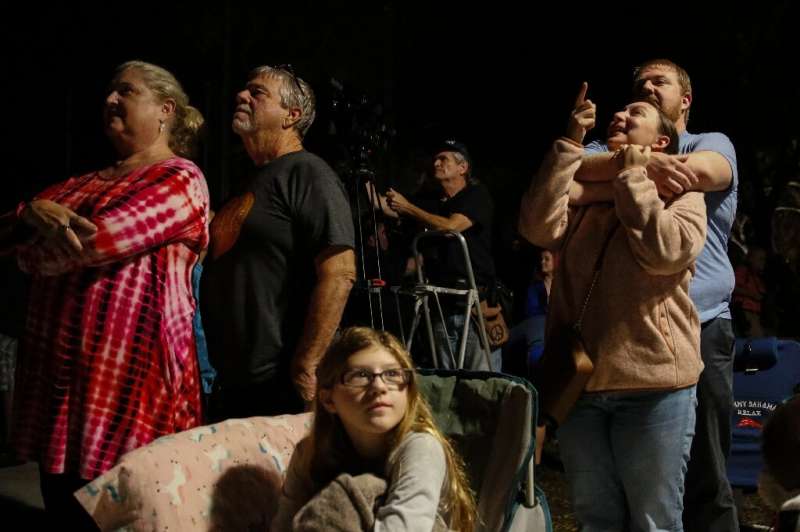 About 100,000 people gathered along the coast to witness the historic event.

Though Orion isn’t carrying humans this time, it has three sensor-equipped dummies on board to help gather safety data for future crew members.

The mission will last 25-and-a-half days, with a splashdown in the Pacific Ocean on December 11. 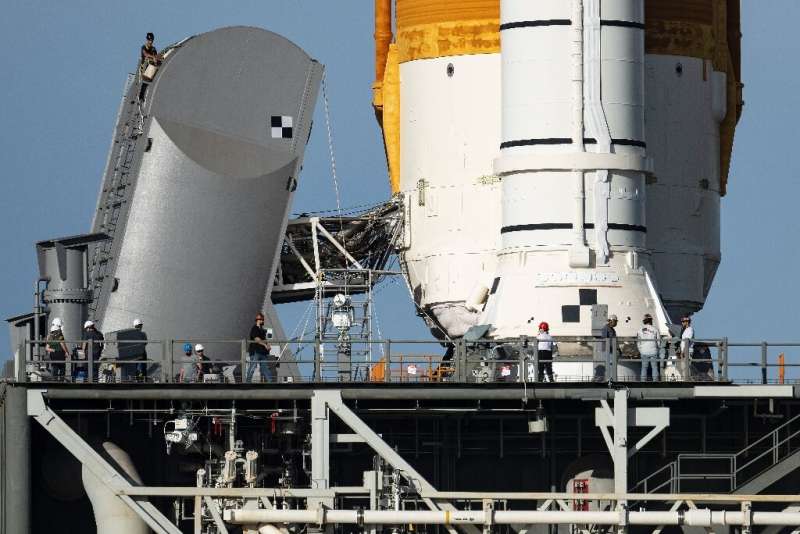 Engineers work on the Tail Service Mast Umbilical of the Artemis I unmanned lunar rocket as it sits on launch pad 39B at NASA’s Kennedy Space Center.

NASA is banking on a successful mission after developing the SLS rocket for more than a decade.

It will have invested more than $90 billion in its new lunar program by the end of 2025, according to a public audit.

Artemis 2 will involve a flyby of the Moon with astronauts in 2024, while Artemis 3 will see boots on lunar soil, no sooner than 2025.

NASA hopes to settle into a yearly launch schedule, and will include international partners from Japan, Canada and Europe.

After Bankruptcy, FTX User Claims Pay Cents on the Dollar